With the 12-point star driver in hand, it was time to do the biggest project yet - dropping the engine and transmission out of the car.  The engine and transmission actually drop out of the bottom of the car, not pulled up from the top like most other cars.  Having read the other conversion blogs, I figured I could drop it down gently, but it didn't turn out quite that way...

Fred came over on Sunday, bearing pizza.  Feeling satisfied after a good lunch, we laid out our strategy.

First we removed the axles from the transmission at the CV joints.  Using the star driver, it was easy.  The driver's side axle can be locked with the emergency brake, but on the passenger side I had to wedge my knees against the wheel and hold it with my hands.  The important thing is to put a bag over the axle end because it's a greasy mess. You can zip-tie the passenger axle to the spring to keep it out of the way, but the driver's side is impeded by the starter motor.  You just have to work around it as you roll the engine out.

I have two hydraulic jacks, as you can see below.  We used a furniture dolly and two 2x4s, and brought the jacks up to just take the weight of the engine + transmission. 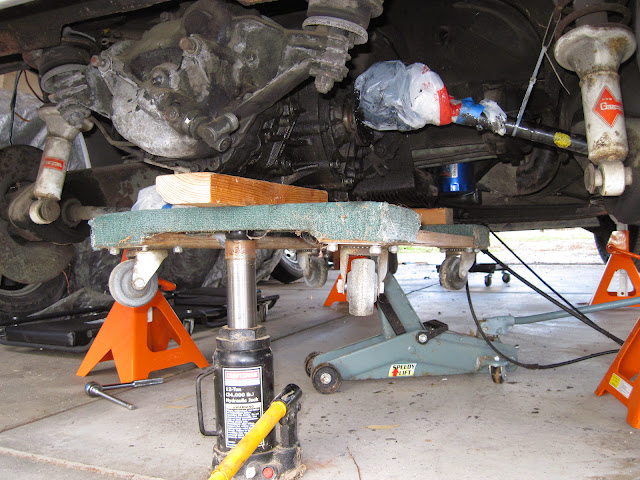 I removed the two bolts holding the engine brace, then the two nuts holding the transmission, and in 5 minutes the engine is no longer attached to the car.  The plan was to drop the front by a few millimeters, then the back, then the front, etc.  That worked well for an inch or so, but then the front jack lost its lock and slipped all the way down.  We tightened it up and jacked it back up about six inches.  We then dropped it evenly until the back jack was down as far as it would go.  We let the front down all the way, then brought that jack around to take the load off the back, then gently let the back down.  Whew!  Would have been better to have two of the blue style jacks, but it worked out.

A final issue popped up - even with the car up on jack stands, the car body was a few inches too low to roll the engine out.  We thought about using the hydraulic jack to raise each side and get a few more clicks on each jack stand, but that would involve a stack of 2x4s to get the needed height and I wasn't comfortable with that.  Then I remembered we had just taken several hundred pounds of the car, so I walked around to the back and lifted the car up.  It actually went up a few inches, so Fred raised the jack stands on each side as I lifted.  That gave us the extra space we needed.  I carefully rolled backwards, maneuvering around the driver's side axle and the tubing on top.  And here we are! 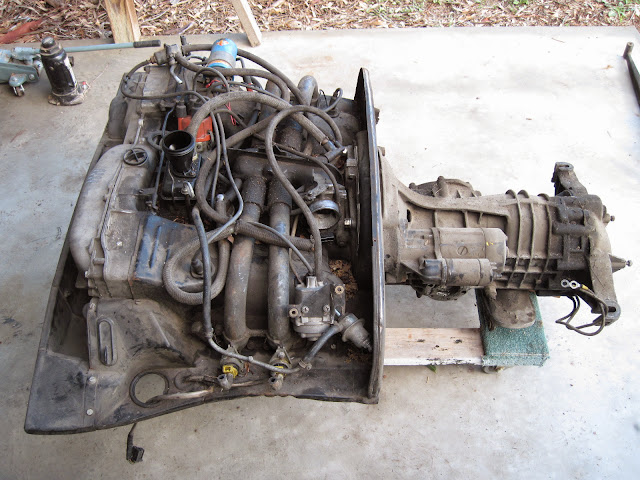 The engine and transmission are strikingly big for the place where they fit in the little car - hard to believe the clever Germans actually fit it all in.  Here's the big empty space from above and below. 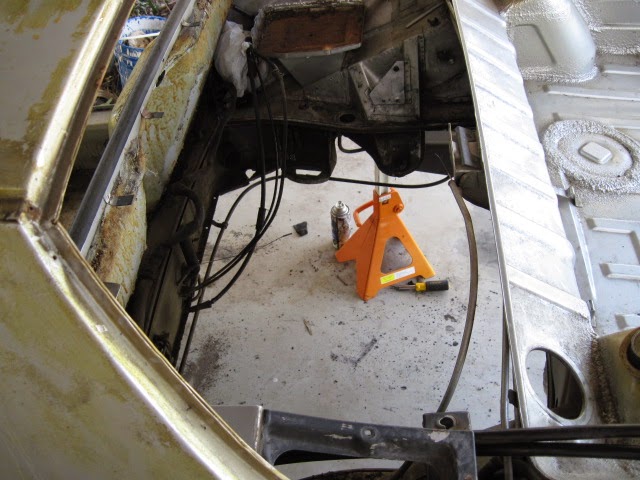 We still had some light left, so we decided to pop the transmission off the engine.  I'll reuse the flywheel, clutch and transmission with the electric motor.  That way I can shift it like a normal car if needed.  There are four bolts holding the transmission to the engine.  We got three of them off easily, but the head of the fourth bolt was obscured by where it's located on the starter motor flange, and we couldn't get a socket or open-end wrench on it.  After some creative metalworking (because I won't be reusing the starter), we got the bolt out but discovered that this bolt is very long, and goes all the way through the engine mount to an exposed nut.  All we had to do was back the nut off from the other side.  Oh well!  We wiggled the transmission a little and it separated from the engine.  Fred supported it while I pulled them apart and it came off easily.

Next step is to take the pressure plate, clutch disc and flywheel off the back of the engine.  The pressure plate came off easily, after we jammed a 2x4 into the teeth of the flywheel to stop it from spinning.  I got some repair receipts with the car that show that the clutch was replaced in the past, and both the pressure plate and clutch disc look great.  They're both about .375" thick - I'll have to check to see how that compares with new, or if they should be replaced while I'm in there.  Also, they're both clean and dry - no sign of oil leaks that mean that they're ruined. 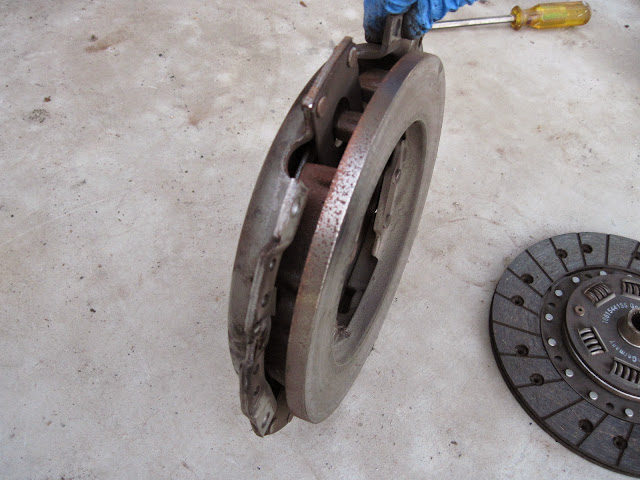 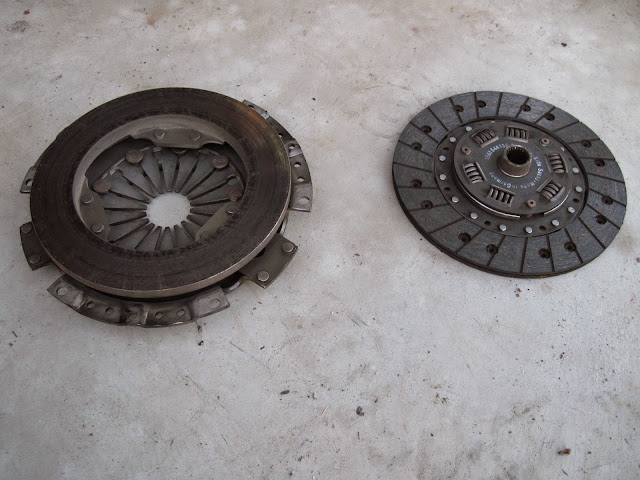 We tried to work on removing the flywheel, but the 5 bolts holding it on the engine just didn't want to release, even with my cordless impact wrench.  We gave it a good spraying with WD-40 and wrapped up for the day.  Probably my most productive day so far, and a lot to show for it!  I'll have to do some checking to see if there's a trick to get these bolts out.  I'll probably need to lock the driveshaft somehow.
Posted by Michael Brown at 9:39 PM 2 comments:

The good news is that the brakes had been upgraded to the BMW parts by a previous owner, and no further work on brakes is needed. 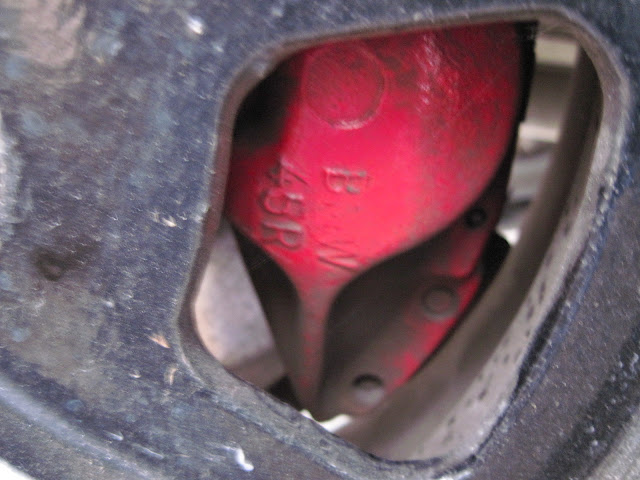 The bad news is that the shocks are replacements, but they and the springs are factory spec, and definitely need to be upgraded.  Electro Automotive sells upgrades as part of the conversion package, so I will have to go ahead with that.

It turns out that Pelican Parts can no longer supply the 12-point CV joint bolt removal tool, so a quick Google search led me to MetalNerd.  They specialize in German car tools and accessories.  The order was handled very quickly and I got it in my hands in two days!  Fred's coming over on Sunday and we'll get the engine dropped.
Posted by Michael Brown at 8:41 AM No comments:

Yesterday I removed the front and rear bumpers.  Very straightforward, no surprises.

Today I worked on pulling the interior.   Some easy, some tricky...

First I pulled the two seats, with four bolts each.  Then I worked on pulling up all of the carpeting.  First I removed the defroster light fixture, then loosened the small setscrews holding the shift knob on, then pulled up the center hump carpet.  Then it got tricky because the steering wheel shaft goes through a hole in the carpet, so I had to unbolt the U-joint just above the carpet hole.  This was tough as the shafts that come into each side of the joint are quite long.  I ended up unbolting both sides, then prying apart the upper fitting until I was able to slide it up far enough so it came off the lower shaft.  After that the carpeting pieces came up nicely.  Then I removed the seat back panel and the aftermarket 3-point racing harness seatbelts.  All of this work led up to the gutted interior.  I found a dollar bill and about another dollar in change, so the car is trying to offset the cost of this project! 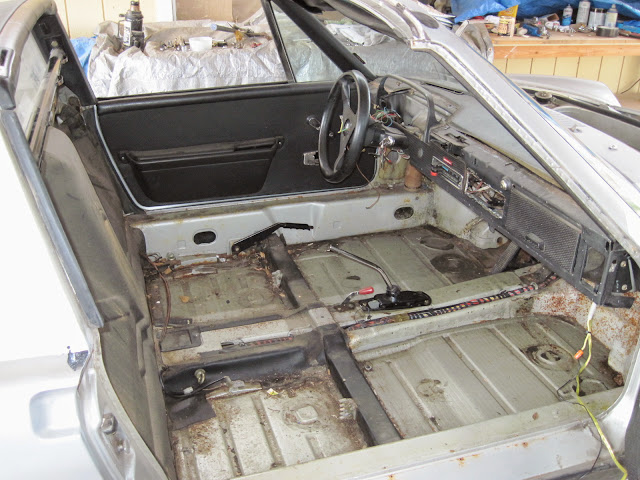 Next I moved on to the steering wheel.  I recently bought the required 27mm socket.  I quickly realized that the nut was on very, very tight and I had trouble trying to hold the wheel and undo the nut.  I finally stuck a 2x4 through the wheel spokes and jammed it down into the passenger wheel well.  When it finally let go, it was easy to get off.  Then I removed the indicator and windshield wiper controls.

With this pulled, I can see the source of two problems I was having.  First, the copper strips that conduct the signal for the horn switch are actually worn through.  So those have to be replaced.  Second, I found that the auto-return mechanism for the indicator is broken.  There were a couple of broken pieces of plastic in the area, so I'll have to see how that can be fixed.

Next I thought you'd like to view the heart of the device that is insanity that is the spare-tire-pressure-driven-windshield-washer-system. 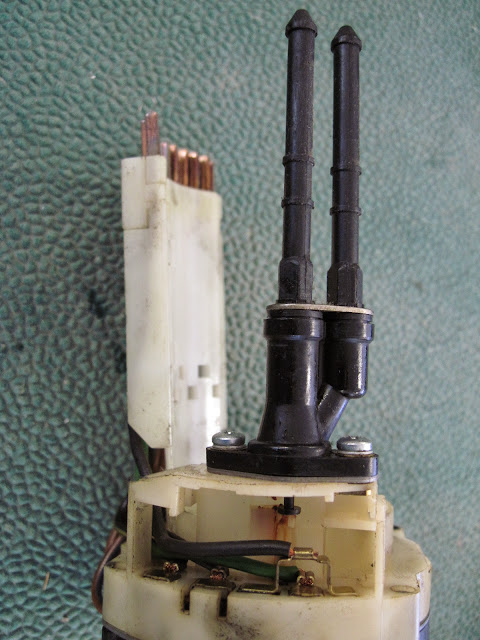 If you zoom in on the picture, you'll see a little black tab that goes into the in-and-out fluid connectors.  When you pull on the windshield stalk, this black tab is pressed into the fluid connector, allowing the fluid to flow.  Unfortunately, it's bat-shit crazy engineering.  I have a couple of choices - I can just leave this alone or remove it and mount a push button switch on the dashboard, or I can track down a 924 windshield control stalk that has an electric switch to drive the washer pump I bought.  I'll make the decision later.
Next I checked the springs and struts.  They don't look original so I may be in luck here.  The springs are .388" thick, so I'll be able to find out what load they can handle.

I'll confirm both of these upgrades with my contact at Strasse Porsche in San Luis Obispo on Monday.
Posted by Michael Brown at 6:04 PM No comments: