My Visit To The New Tesla Store in Los Angeles

I was working down in LA at a solar project and at the end of the day I drove over to the Tesla store I visited last May.  To my surprise, it's in the process of being converted to a service-only location, to support the Roadsters and the Model S sedans rolling off the assembly line now.  The sign below shows they've opened a new location in Santa Monica. 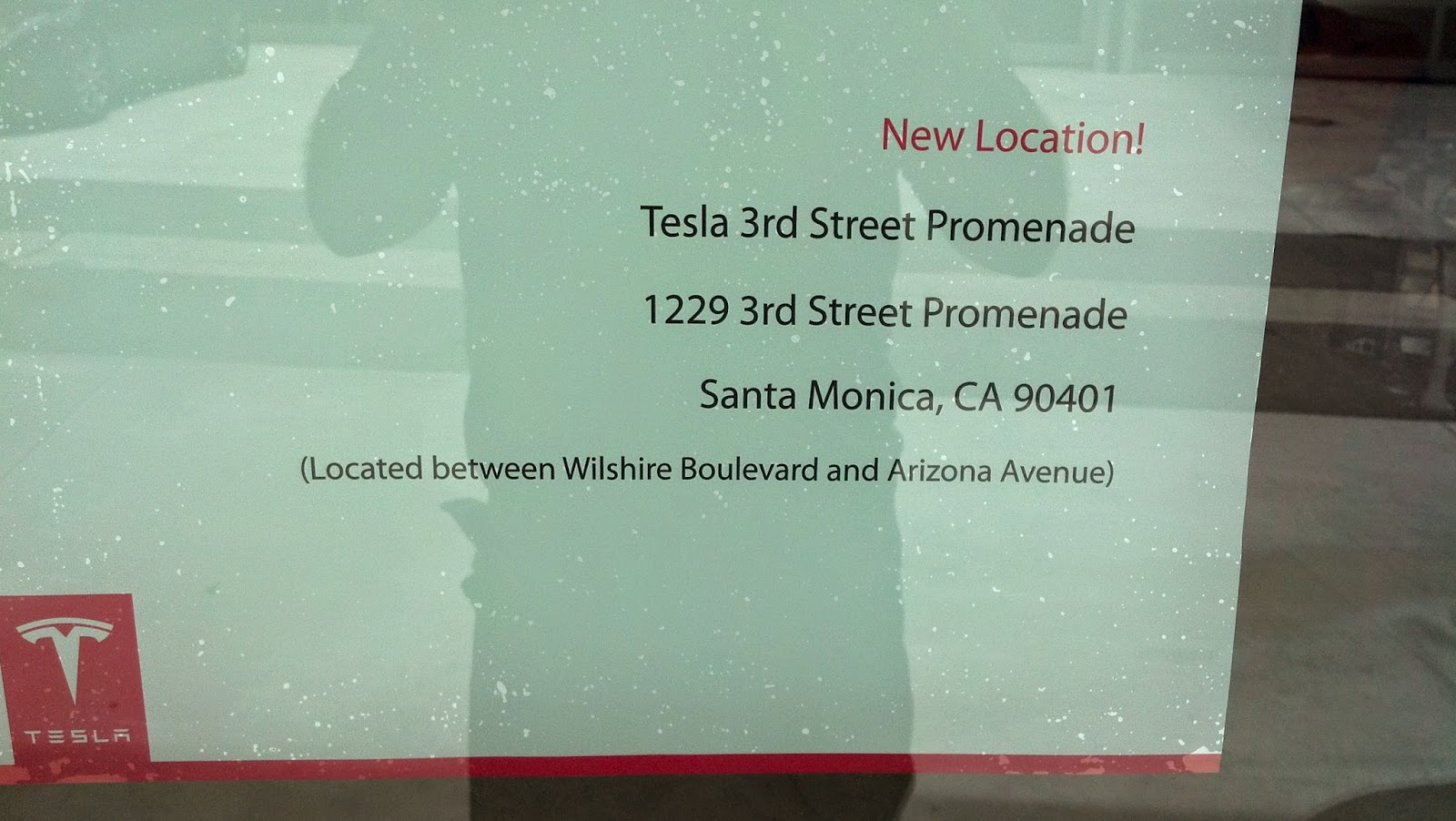 I didn't understand the Promenade concept until I got there - the street is blocked off to traffic and is a pedestrian-only area.  This is the entrance to the new Tesla store.  It was probably a trendy women's clothes store in the recent past. It's pretty narrow, but the layout was designed by George Blankenship, the designer of the Apple store concept, to use the space efficiently.  Right in your face is one of the gorgeous hand-built Beta Model S cars. 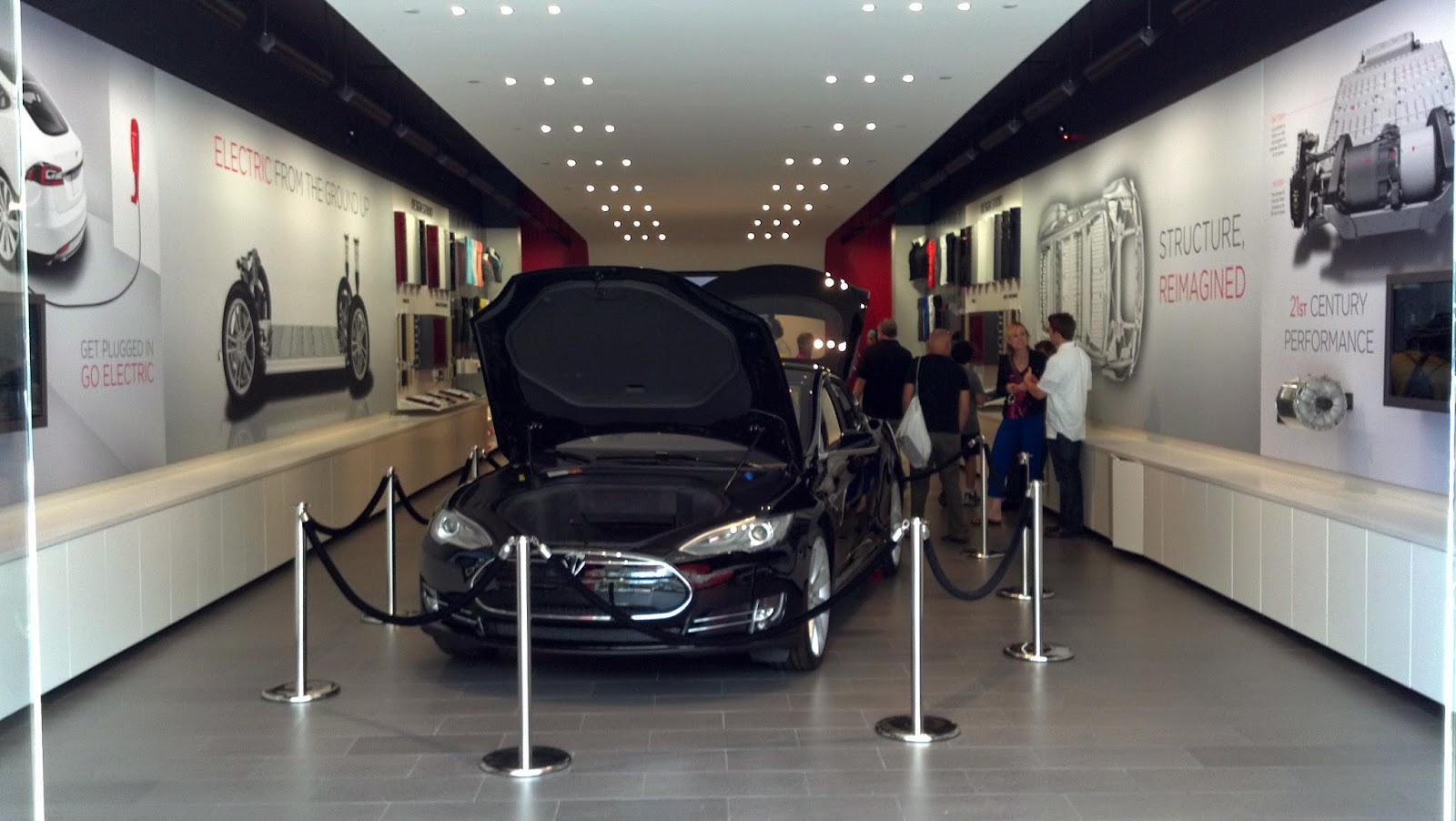 The front trunk, or "frunk" as they call it, is about the size of a spare tire but very deep so you could put a lot of grocery bags or a couple of suitcases inside. 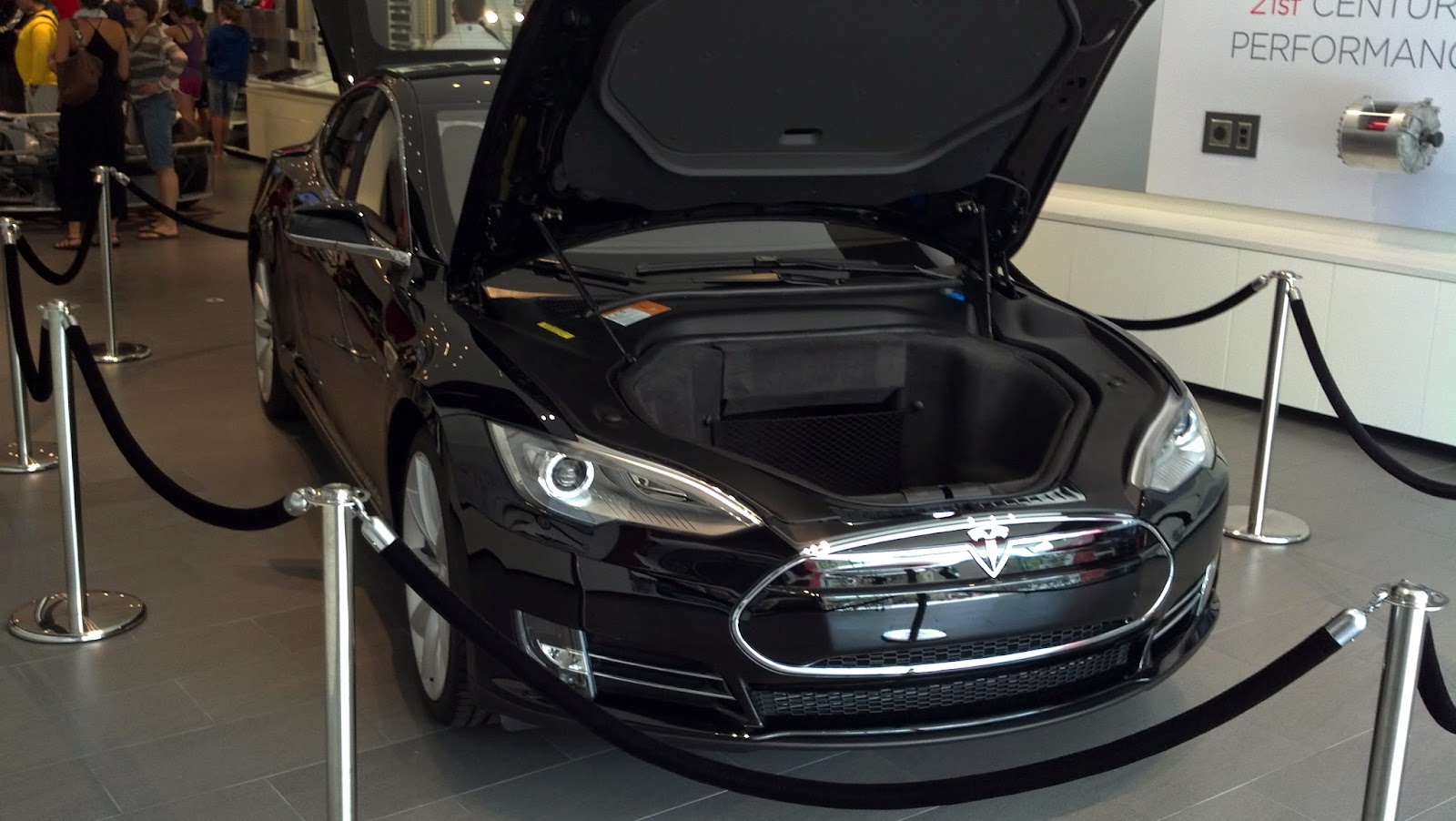 The rear trunk in this model shows the jumpseats.  A young couple was closely checking these and the baby seat mounted in the back seat.

Behind the display car is a rolling chassis showing the suspension, battery pack and motor / transmission. 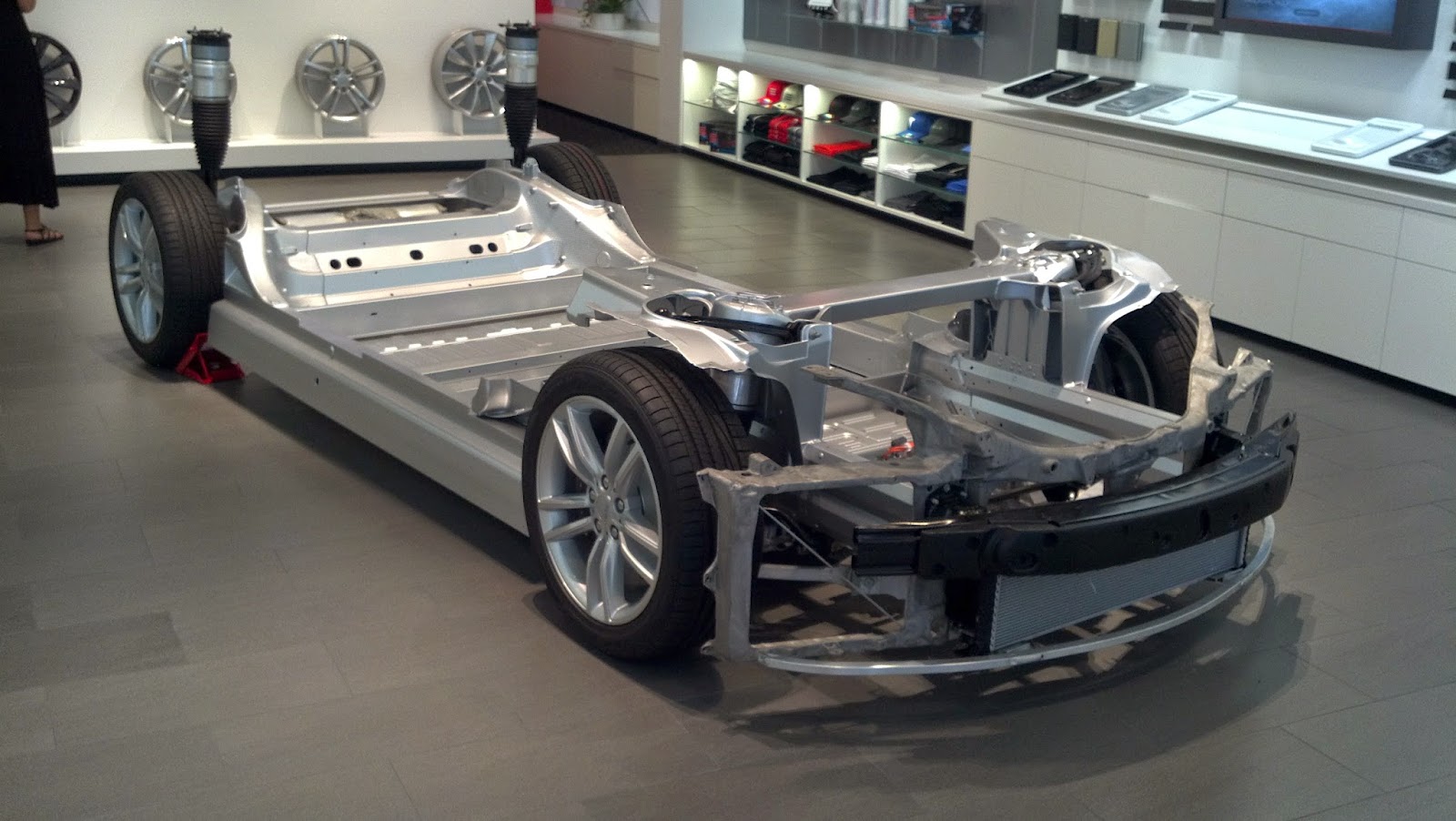 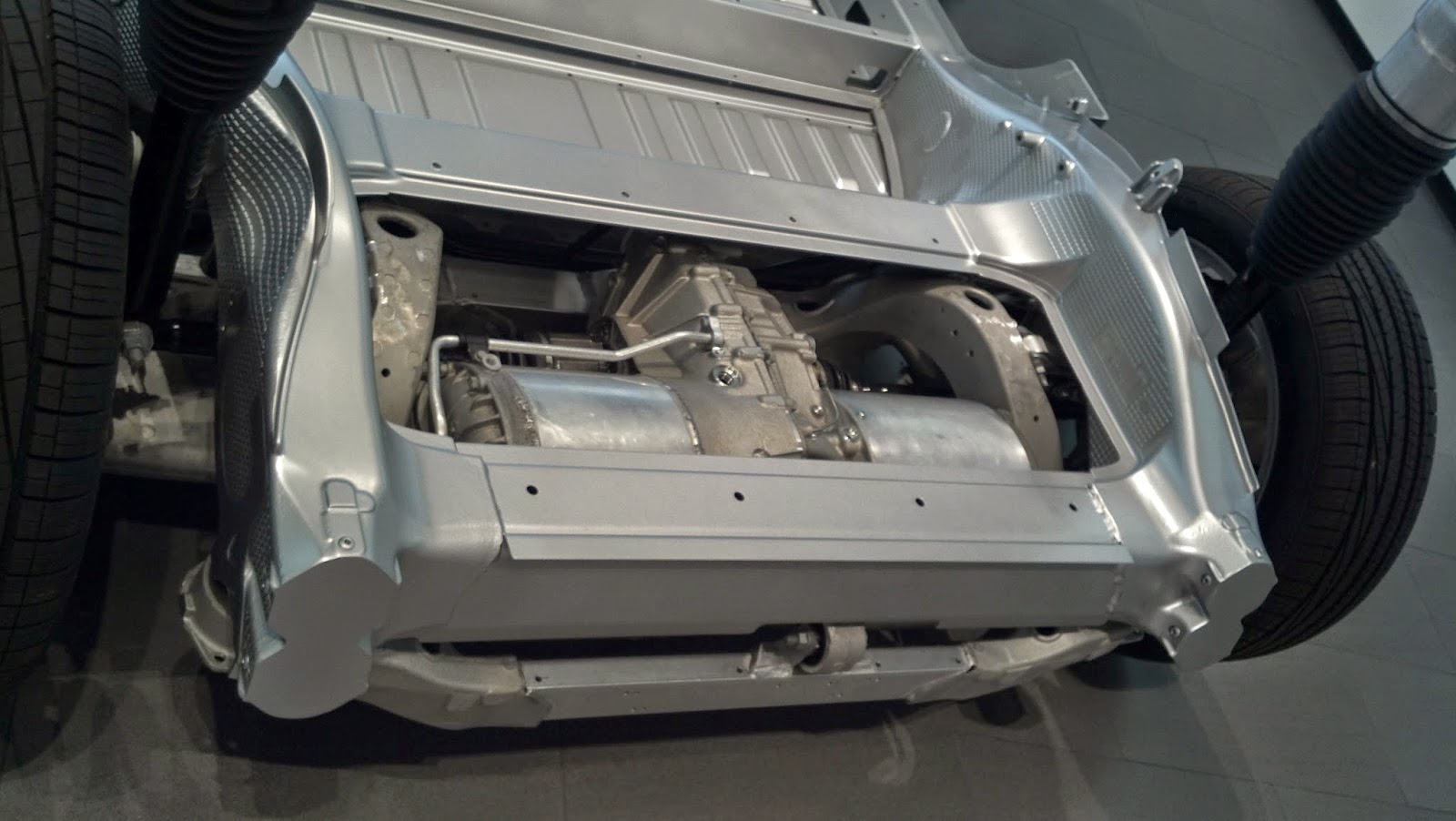 On the walls are all of the materials you get to choose from on your car, interior and paint and some Tesla merchandise.  I picked up a metal license plate frame for the 914. 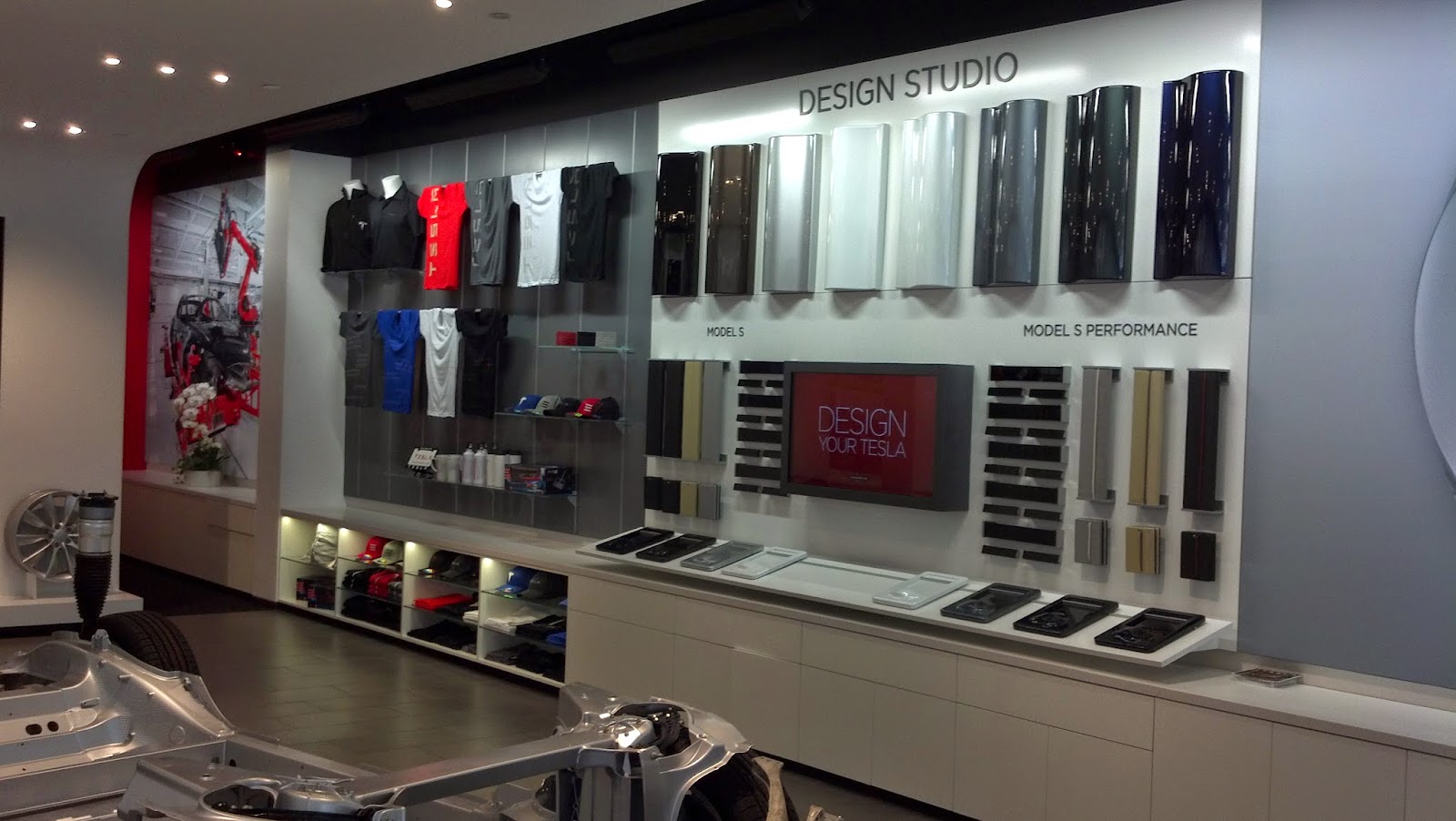 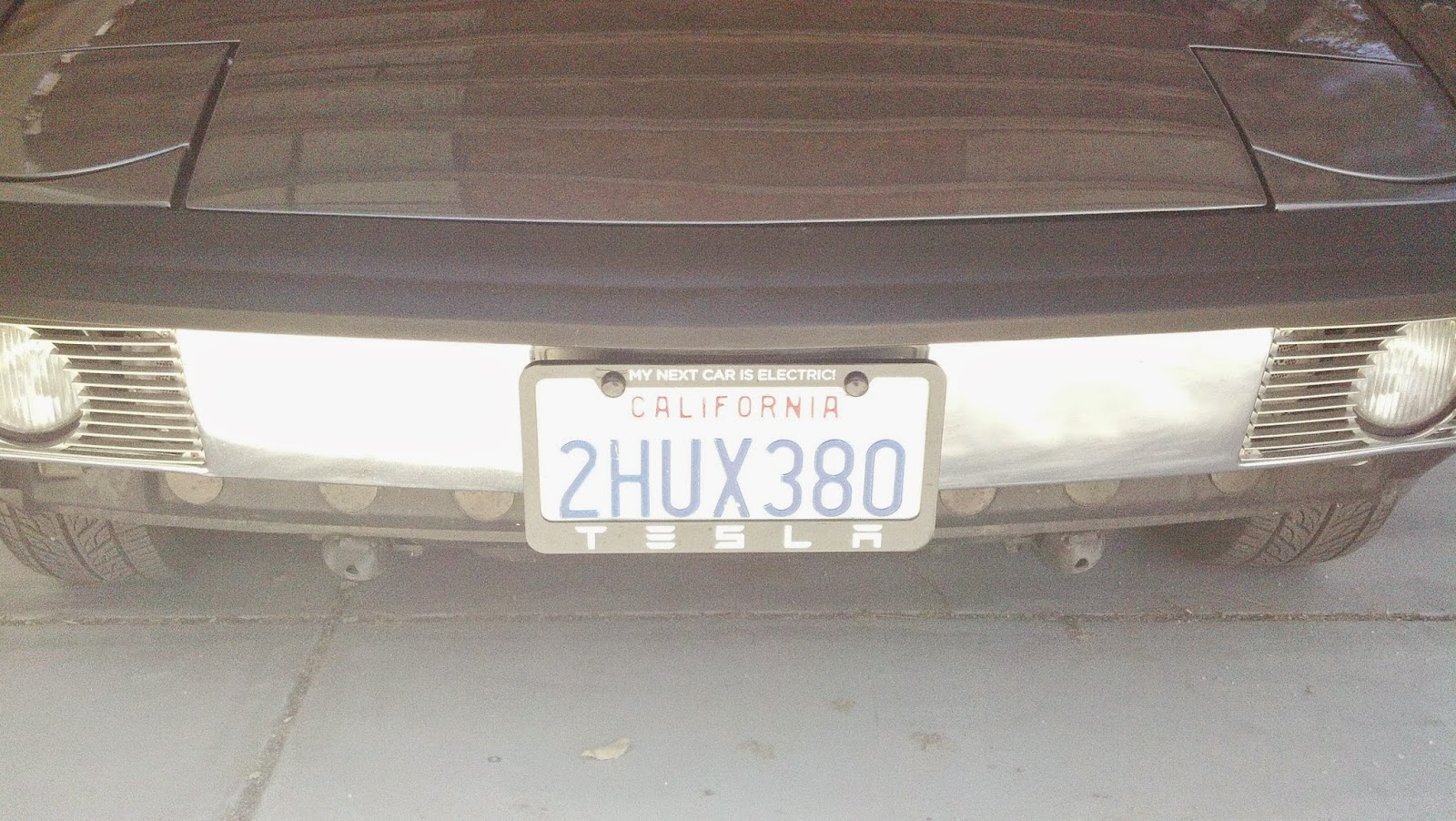 I walked around soaking it all in until I re-introduced myself to Adam, who I met a year ago at the other store.  We talked about the car and then he let me sit inside it.  Even for a hand-built car, it had magnificent fit-and-finish.  From the outside, the whole dashboard looks digitized... 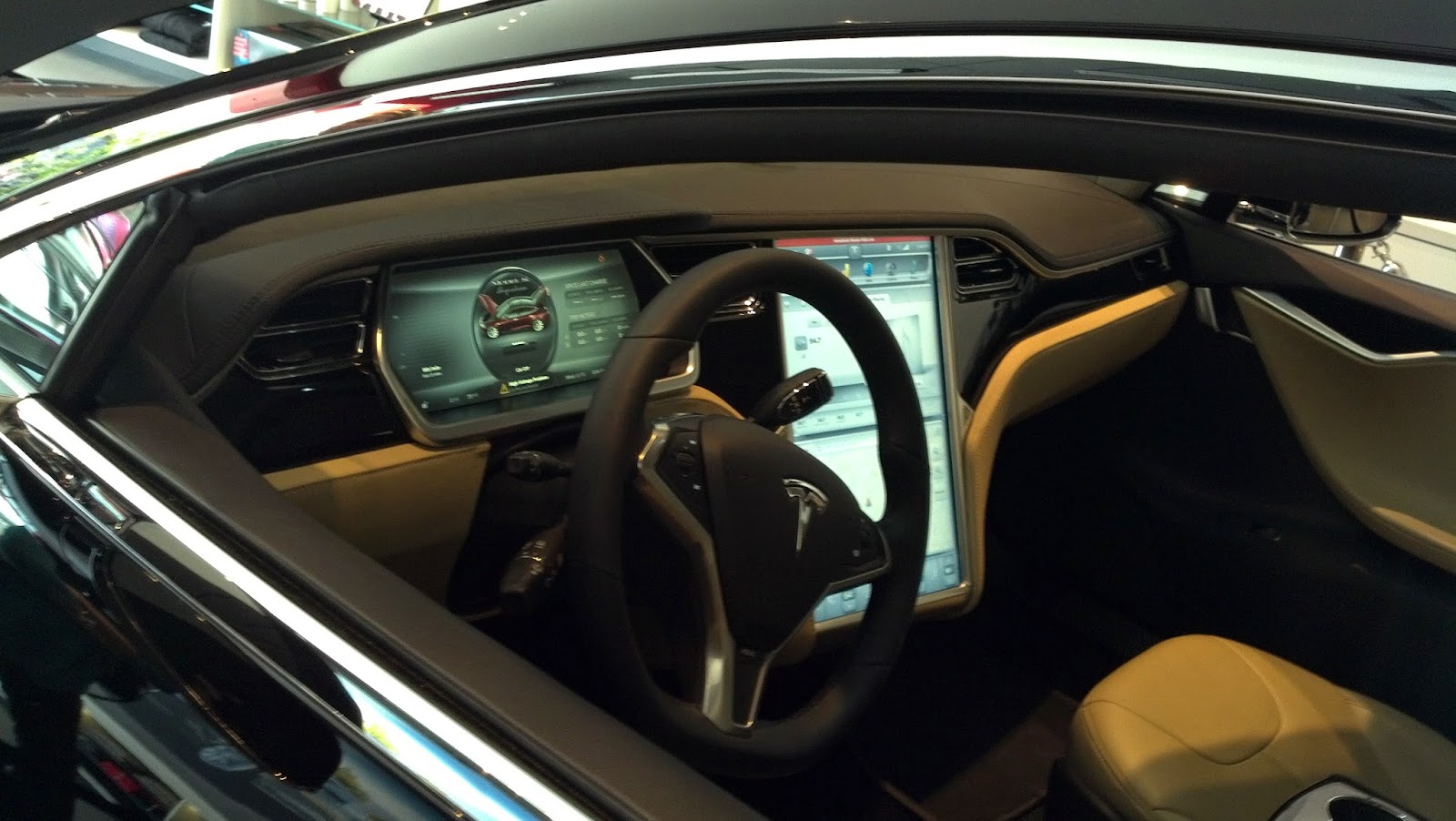 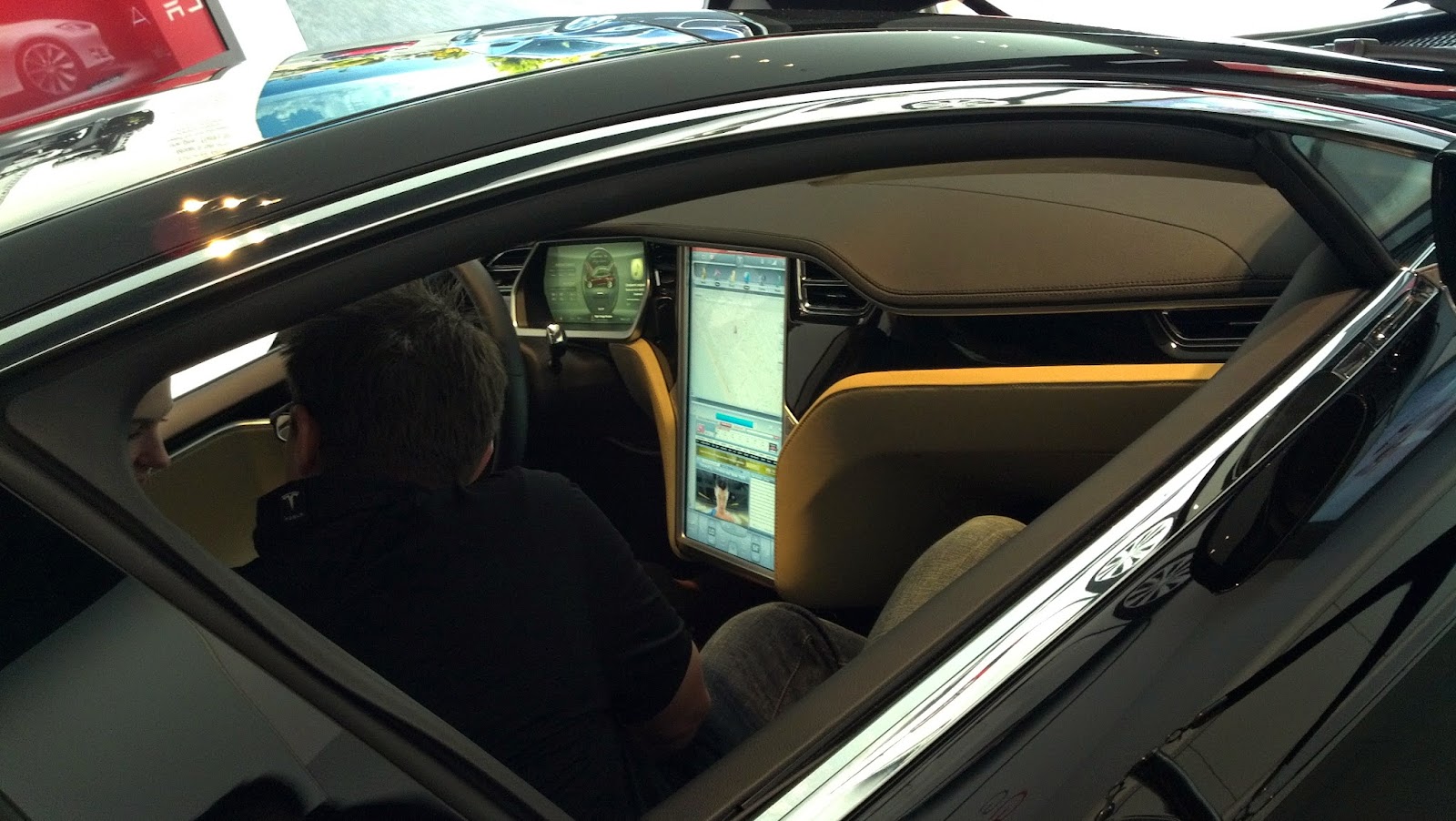 Once inside, the effect is even stronger.  The normal place for driver's gauges is a non-touchscreen display, showing things like speed, state of charge, climate and audio settings. 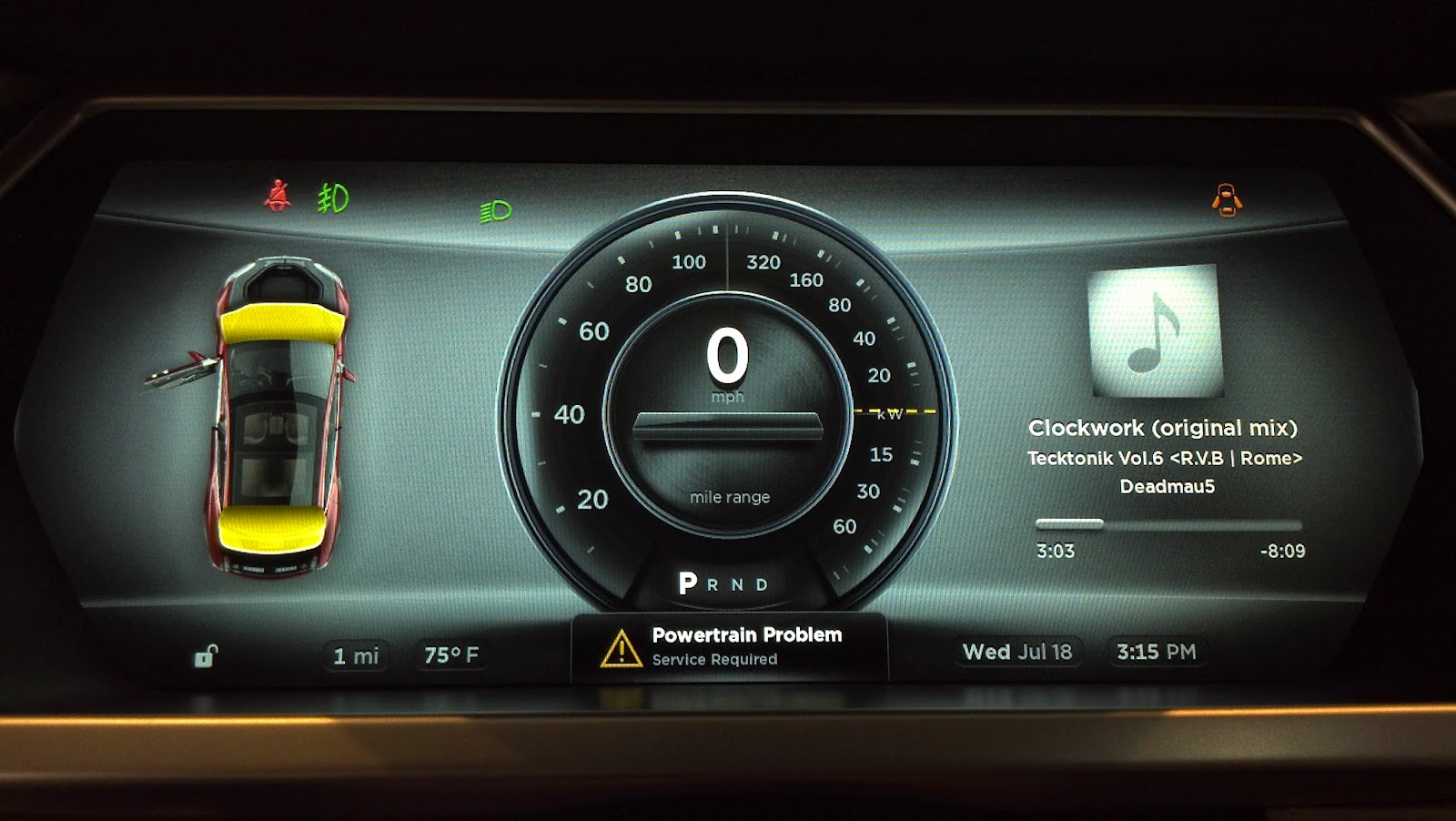 In the center of the dashboard is this magnificent 17" touch screen display that handles every aspect of every system in the car that you could imagine.  Even the sunroof position is controller by a graphical slider.  Adam says there are no restrictions on the driver using this screen while moving, but if the government puts any regulations in place, they're ready with a software update process. 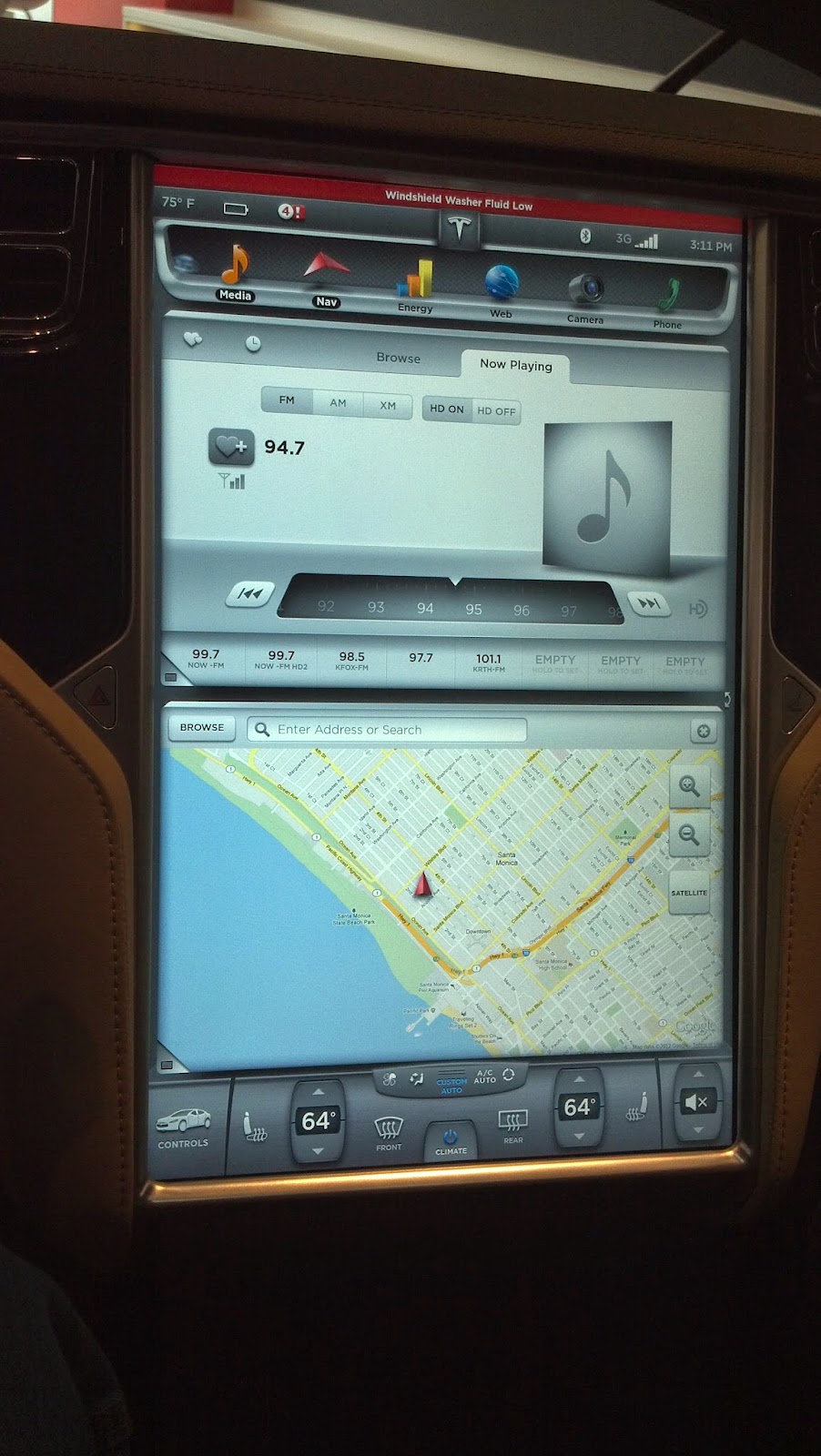 To get a test drive, you have to put down your refundable $5000 deposit and then wait until later this year or early next year once the factory produces enough cars to fulfill all of the currently pending orders.  The test drives will be run out of this store for the LA area.

It was great to see Adam again and realize how far Tesla has come in the year since I went to the old store.  I bought some Tesla stock back in January and it's been on a bit of a roller-coaster ride but I'm happy to hold out for the long run when the "shorts" get punished for not believing in the vision and execution of whatever Elon sets his mind to.  My stock gains won't buy me a Model S but I can always imagine...

I even picked up a souvenir! 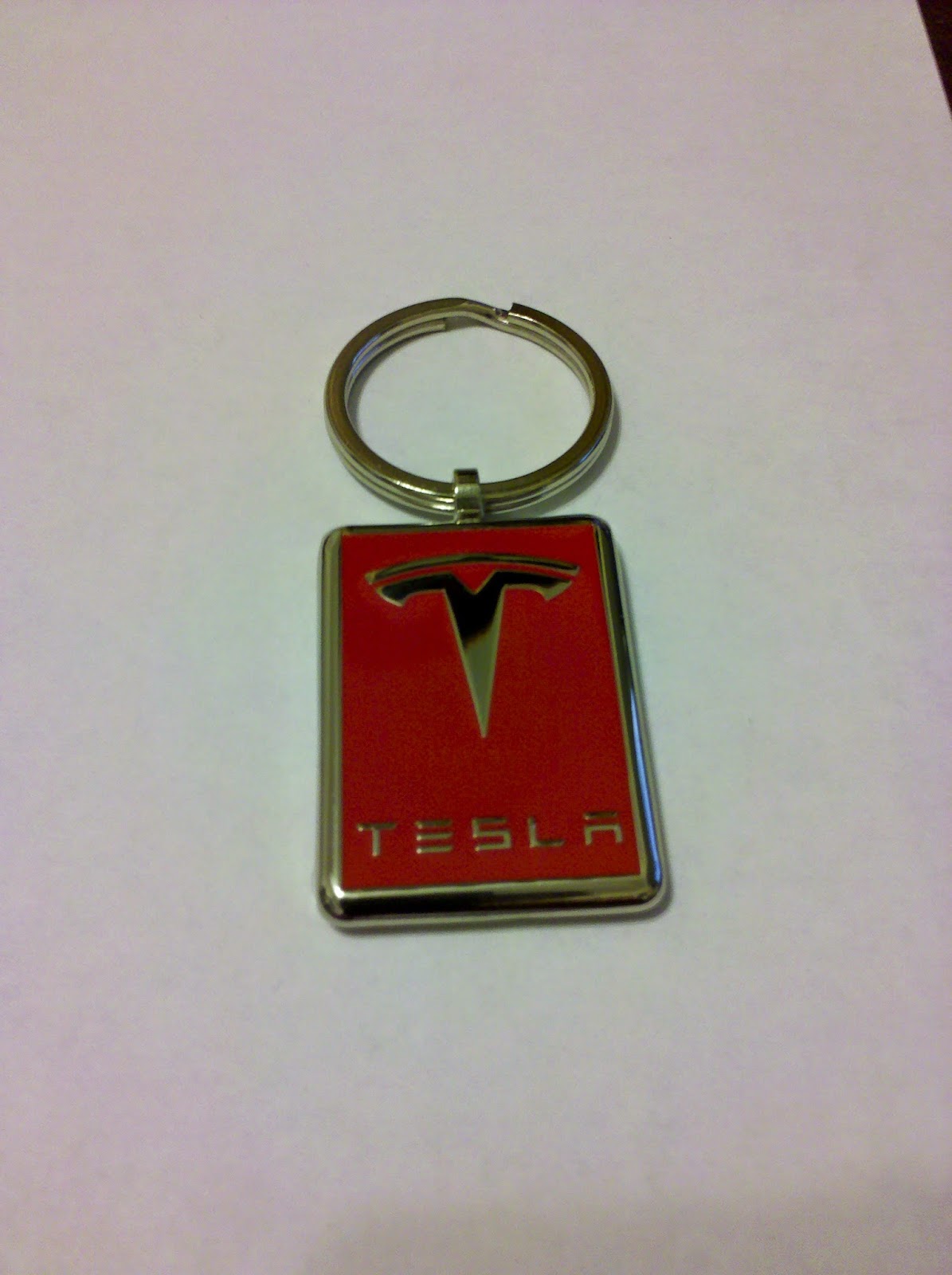 Posted by Michael Brown at 10:03 PM No comments: