The next day I took the bus to Chadstone Shopping Center in eastern Melbourne.  As you can see, it's in the middle of the walkway in the mall, at a bend with a cupola above, big pillars and a pair of escalators, a perfect place to pick up a lot of foot traffic. 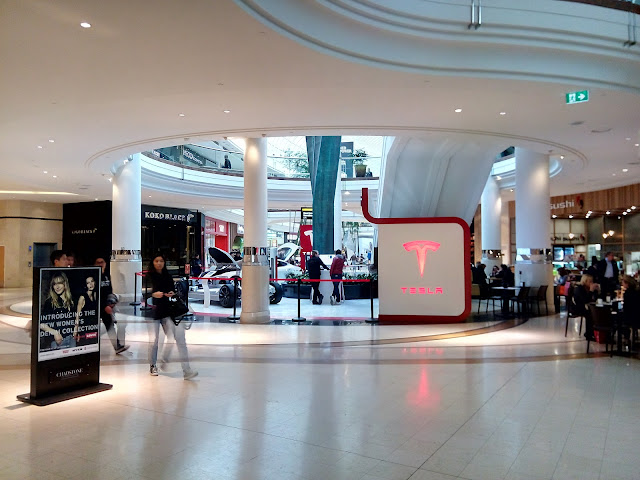 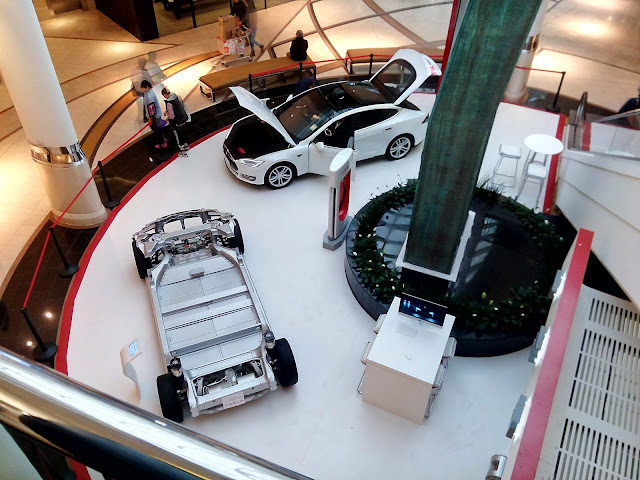 There was a white 85 and a rolling chassis with only the rear motor, plus a mockup supercharger and an HPVC unit that had enough power to open the charge port on the car.

I spoke briefly to the Tesla staffer who I thought I recognized from yesterday, but by the way he was talking it was like he didn't know me, so I explained about my visit to Church Street yesterday, my love of Tesla, my car, my trip, etc. 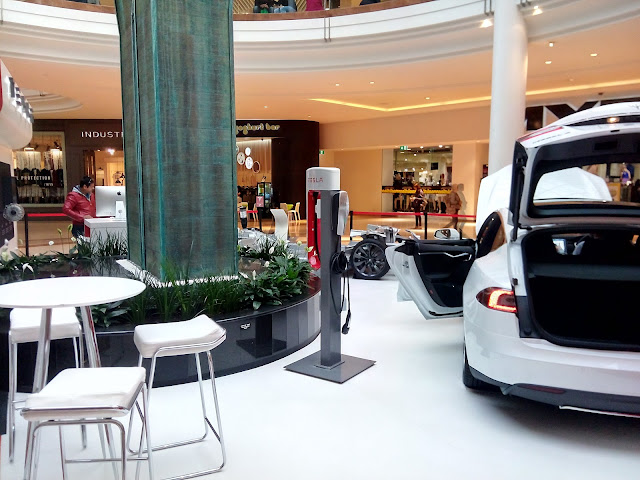 I was sitting at a side table looking at my phone and people kept coming up to ask me questions. I'd tell them I don't work for Tesla but the staffer was always busy so I tried to answer best I could. They normally have two people working, with two Teslas in the parking garage ready for test drives.

This is a great marketing strategy to pick up folks who just happen to walk by and are drawn in by the cars.  Infinity had a similar display in another part of the mall but there was nobody looking...
Posted by Michael Brown at 8:22 PM No comments:

Tesla has two locations in Melbourne Australia, a full showroom & service center on Church Street in East Richmond, and also a display area at the Chadstone Shopping Center.  This is the Church Street location, 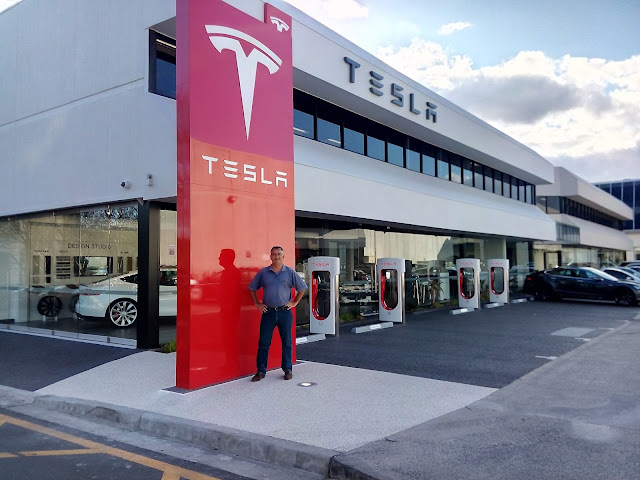 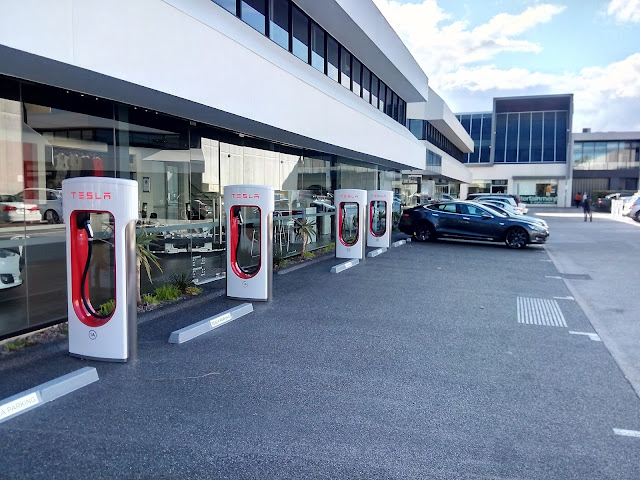 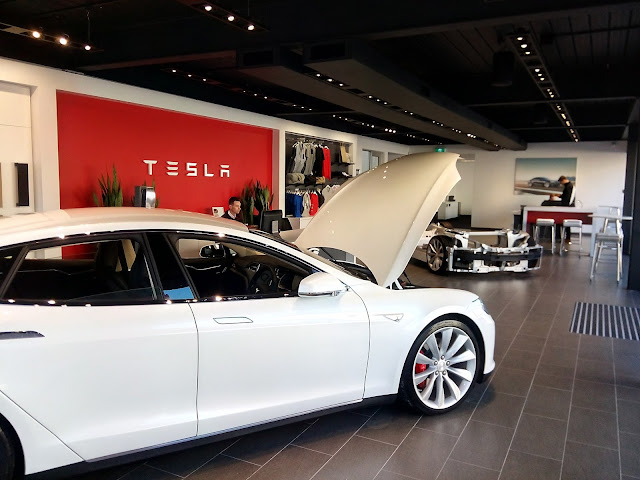 The folks at the Church Street showroom were great. I talked with Nick, a service technician. He gave me the tour around. This location has a massive service shop area, only about 25% of the floorspace is used right now; I was asked not to publish any pictures. This building is meant as an owner support center while the other site at a shopping mall in nearby Chadstone is where they get the foot traffic and sales leads.

I then spoke with Nathan, the Product Specialist. He has a flexible role but is the go-to guy for technical issues. He handles walk-ins and phone calls, works 9-5 5 days a week and floats between the two locations. He does test-drives, follow-ups, and lead captures. He needs to log about 45 leads per week but it's easy to do at the Chadstone location.

We also discussed the Delivery Experience role and the Service Concierge role, with me filing the information away for a foggy future plan...  This is the Delivery area. 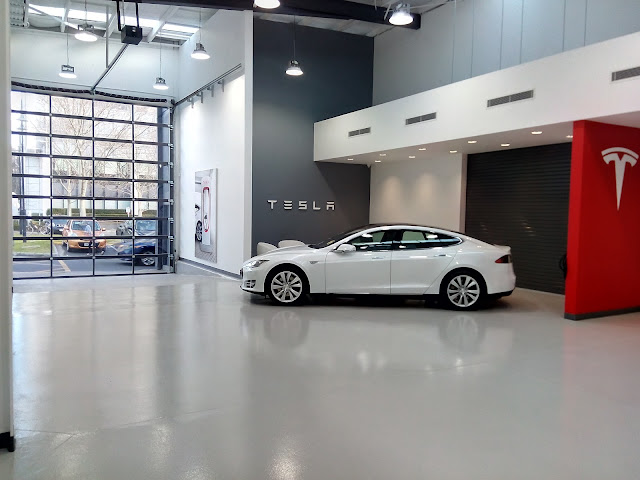 Tesla offers a 24-hour lounge for folks who need a charge outside of business hours.  It's accessed via a keypad on the door and is heated & cooled, lighted and has a coffee machine. 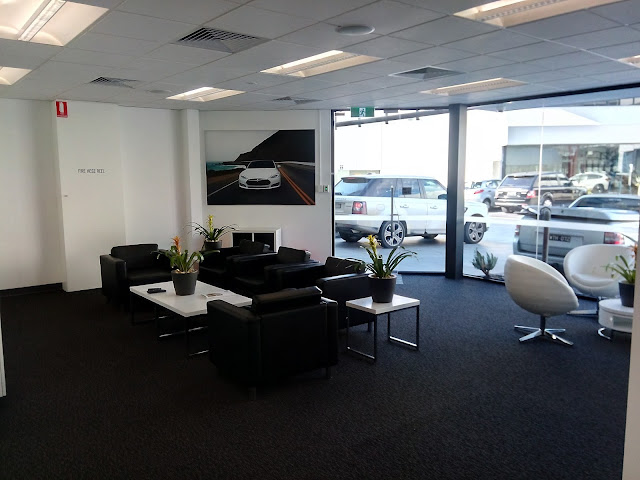 Tesla has to make locale-specific changes for the various markets around the world. The differences on the Australia model are: 1) No child seat option - against crash safety rules. 2) No web browser in the 17" display - against driver inattention rules. 3) Mennekes Type 2 charging connector. 4) Some of the new autopilot features will be allowed, but some may not comply with current law and will be excluded.

Big thanks to the staff!
Posted by Michael Brown at 8:13 PM No comments:

One top goal on my Around-The-World trip is to hit as many Tesla locations as humanly possible.

While in Sydney, I took the bus from my hotel across the city, jumped off and walked about 300m to the Tesla showroom. It's really big, with a huge long glass wall along the road, with about 10 parking spots right in front and superchargers all across. 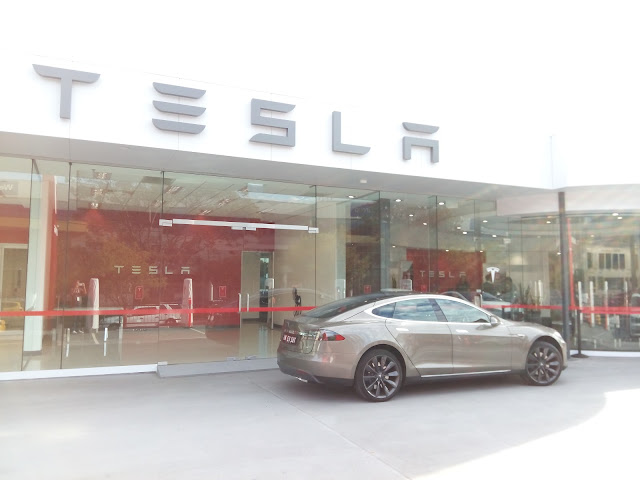 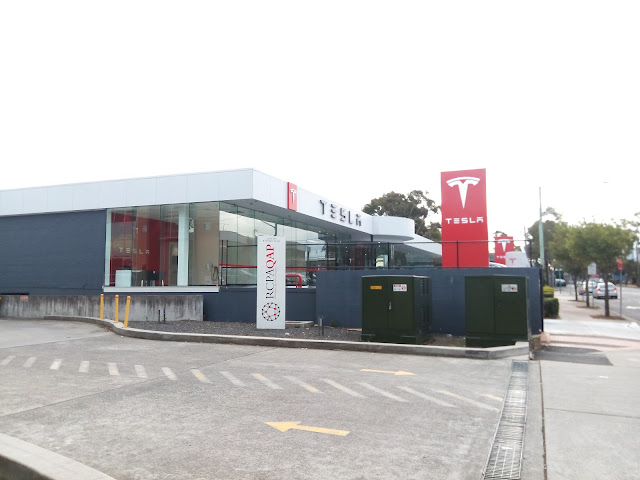 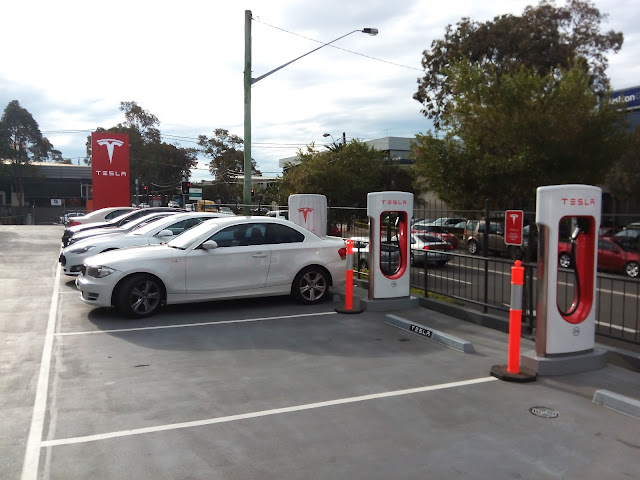 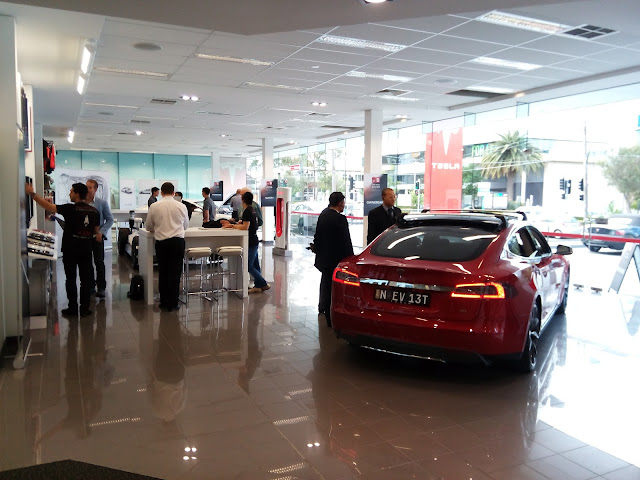 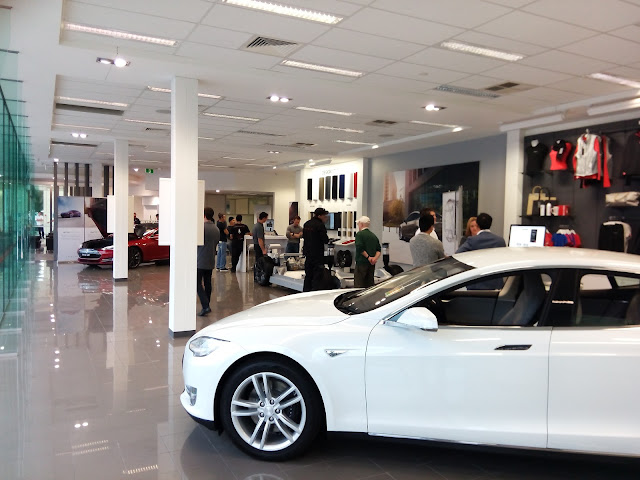 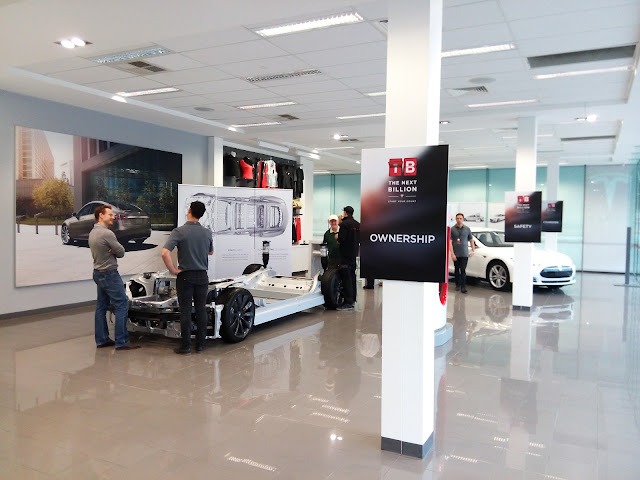 Like most Tesla showrooms, they had a rolling chassis on display but this one was the first I've seen with the "D" motor installed up front.  They don't have any Ds for sale yet, but should be soon. 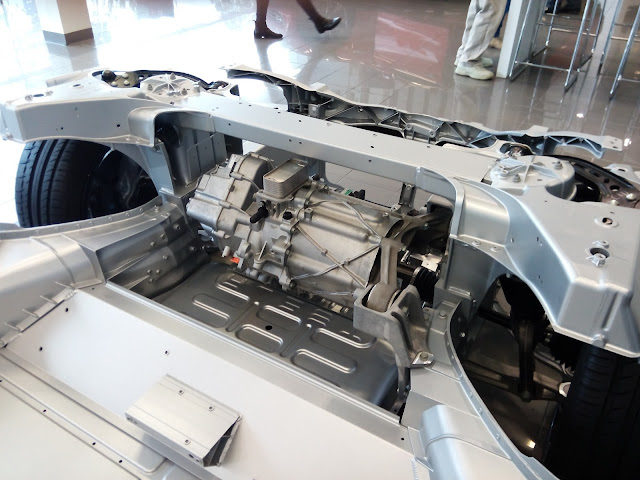 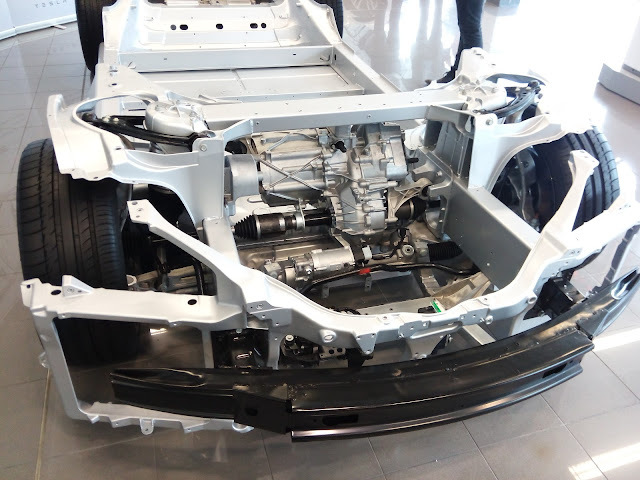 I spoke with Gavin, the assistant service manager about Tesla and my electric 914. I then arranged for a test drive with Taylor, an American woman who went to Uni here and never left. I didn't get to punch it due to city traffic, but it drives perfectly.

They're running a special Billion Miles event the next day, so I got a Tesla neck lanyard and ID card for taking a test drive. 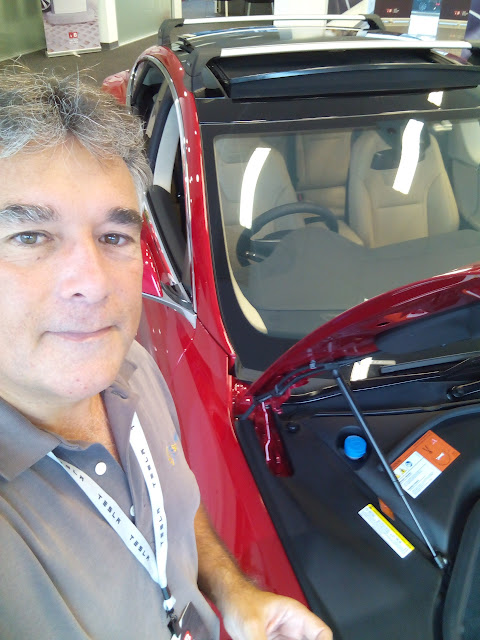 Gavin took me downstairs to the service area, it's painted Tesla red and white and sparkling clean as you would expect, only one orange Roadster in for service. Gavin said that since Australia was later in the worldwide rollout, they didn't experience a lot of the early problems such as naughty door handles and drivetrain bearings.  Gavin asked that I not post any pictures of the service area and I'm happy to comply.

Tesla uses the Mennekes Type 2 connector here for supercharging, with 7 pins, and physically a bit larger than the US connector. 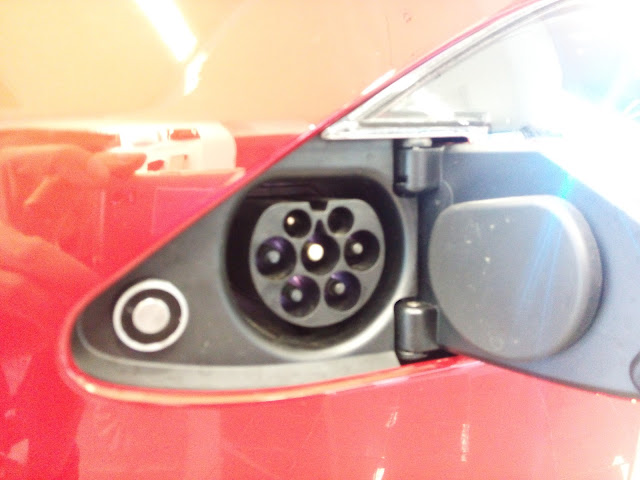 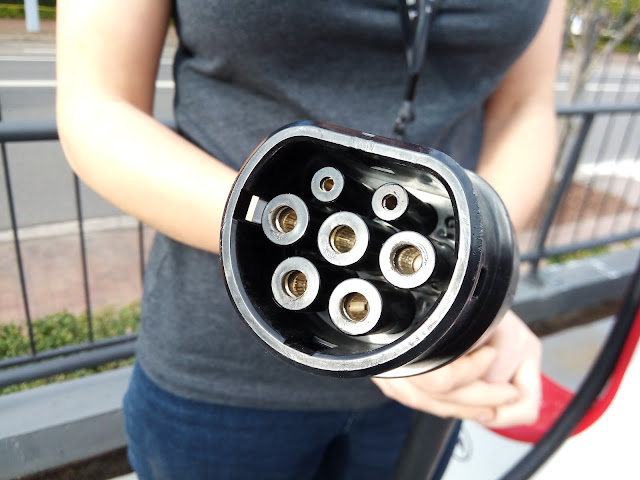 Pricing goes from AUD $113,152 "on the road" for the cheapest 70 kwh pack with a 4 month delivery queue, up to $225,763 for the fully loaded P90D, including $43K in taxes. The only government savings on an electric car is a slight decrease in the Luxury Car tax. The current Aussie government thinks coal is the solution for the future and is actively fighting solar, wind and electric vehicles. Hope the bums get voted out next time.

Many thanks to the Tesla staff for taking the time to chat and answer my questions and give me a test drive!
Posted by Michael Brown at 7:55 PM No comments: