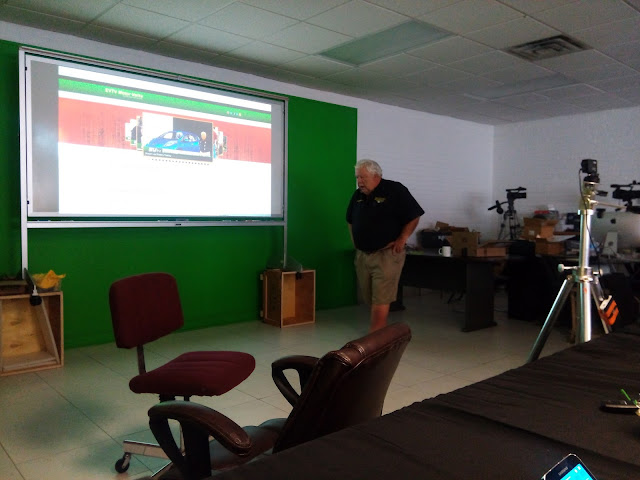 This smaller event is being held at the EVTV workshop, as was originally envisioned five years ago.  We have about 45 in attendance people this morning.  Even before the cancellation, registrations were only about half of EVCCON 2014.

There are big changes happening in the world of home electric conversions and the world of EVTV, Jack's trying to listen to the signals.  Cheap Nissan Leafs, the non-2016 Chevy Volt, staff turnover at EVTV, home conversion component suppliers going out of business, and many other factors, so he's moving away from specialty suppliers towards OEM components to use in your electric conversions.
If you use a Chevy Volt charger in your car, if it fails you just order another one from GM, it will be available for years and years.  We just need to know how to hook them up and control them.  We are still in the Innovation phase in the Standard Adoption Curve so things are chaotic.  The Early Adopter phase normally starts when the technology is at 2.5% penetration, we are still at only 0.7% electric vehicle penetration vs. Internal Combustion vehicles.

The auto industry seems to have settled on the use of CANbus for communication between electronic devices around the car and that standardization helps us.  The component suppliers don't generally publish the command structures for these devices so we have to reverse engineer them.

Jack thinks there is a lot of innovation left to be discovered, like urban transportation solutions.  You'll understand if you've ever tried to park in Boston.  Storm Sondors set up a kickstarter project for an electric bicycle for $500 and 55,000 people signed up.  Shipping was slightly delayed but the bikes are getting on the road.  Sondors set up another kickstarter with a $75,000 goal and now has over $1M in subscriptions. 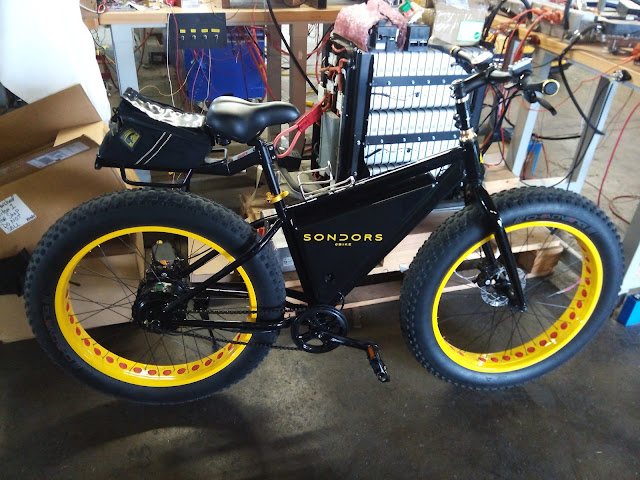 We also have to teach the market about the benefits of electric transportation.

Tesla is a bit of an outlier as they have proven to be very innovative, beyond what most people could imagine and making it a reality.

Steve launched Charge.net.nz to promote electric vehicle uptake in New Zealand.  Previously, he developed the DJ software called Serato.  After becoming fabulously wealthy, he now has a stable of a Nissan Leaf, a Tesla Roadster and two Tesla Model S.  Nick is a Mechanical Engineer and is in the final stages of a Mazda Miata conversion and has joined Steve in the Charge.net effort. 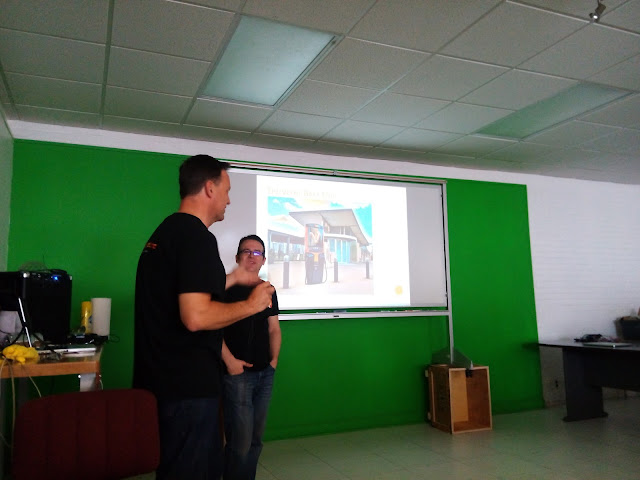 Steve and another Model S owner Carl decided to do a road trip from the far north to the far south of New Zealand and they quickly realized there is a big problem with the lack of EV charging in the spread-out nature of the country, which is hindering the uptake of EVs.  Steve came up with the idea of rolling out his own DC fast charging network of about 75 stations using Tritium chargers from Australia.  The goal is to have the chargers spaced about 80 km apart.

New Zealand is well-placed for EVs as the grid is about 80% renewable energy with a massive slice of hydro power, followed by geothermal and wind.  Solar is not strong there due to a lack of government incentives and low wholesale energy prices.  Many people have an easy location to park and charge their cars and the daily average distance driven is 20 miles.  This is good for a Nissan Leaf-like car, but bad for longer trips.  Hence the need for a strong fast-charge network.

The electricity market in New Zealand is broken into 4 parts: the generation companies, the grid transmission and distribution companies and the retailers.  In order to place a charger, Steve has to locate a willing partner with a strategic location and ample electric supply such as city councils, retailers, and even gas stations, come to an agreement with 4 companies to get an electricity contract, install the hardware and publicize the new station.

Every location in the country has access to 3-phase power and power is delivered at 230V at 10 amps so high-power charging is viable both at home and at charging stations.

Currently there are only 350 EVs in the country and not all of them have a DC charging port, so the business case for deploying charging stations is very poor.  It takes someone with long-term vision to make the decision to move forward with a plan, in anticipation of a strong growth curve of EVs.

Steve's pricing model is 25 cents/kwh and 25 cents/minute.  The electricity cost is about the same as a car owner would pay at home and the time charge encourages people to charge and leave quickly, making the charger available to more customers.

The Tritium Veefil charger runs at 50 KW with CHAdeMO and CCS Type 1 plugs.  It will charge a car to 80% by default and shut off or the user can ask to push to 95% full.

Customers register on the charge.net.nz web site with a credit card and can request an RFID tag.  Users plug into the charging port then log in by swiping the RFID tag, using the PlugShare mobile app or coming soon sending an SMS.

Steve has developed the backend software in an open and collaborative way so there is interoperability between other charging networks.

Session: An Introduction to CAN networks - Jack Rickard

Jack's order of 6 Brammo electric motorcycle motors arrived during lunch and one can be yours for the low, low price of $2000.  They're 40 kw peak and 25 kw continuous power, permanent magnet, water cooled and weigh 13 kg.  Sevcon offers a compatible controller that you'll have to chase down on your own.

Vector is the primary company in the world of CANbus and it is extremely expensive.  Jack's Arduino-based boards and Collin Kidder's software have nearly replicated the functionality of Vector's product.

Craig Smith did a session at DEFCON where he showed how to "hack" the CANbus in automobiles.

Bosch invented CAN in the 1980s as the solution to reduce the weight of the proliferation of wiring up many computerized devices in cars.

Jack then described the nature of the two-wire CANbus wiring, termination, device attachment and differential signaling.  He showed the standardized layout of a data packet and its sub-components. 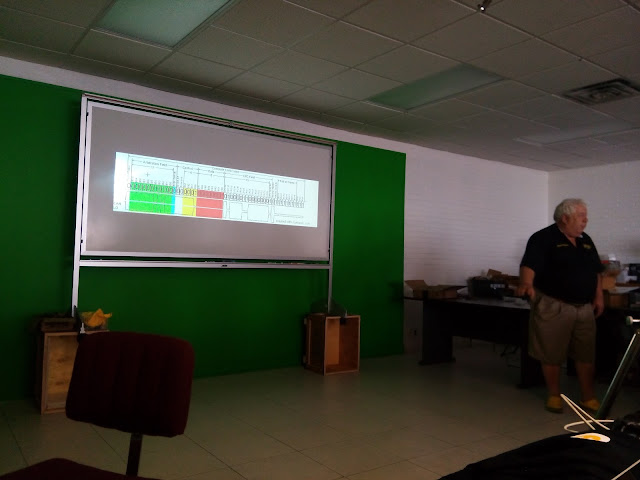 CANbus can run at several speeds, most devices we've seen are 250 kbps or 500 kbps.  A lot of protocol overhead is handled in hardware for you by the transceiver, you as a programmer will only care about the message id and data payload.

Masks and filters are part of the protocol and are normally handled in hardware, allowing the programmer to only be notified about interesting message ids, which significantly reduces load on the software processor.  Two devices can start transmitting at the same time and the one with the lower message id wins and is allowed to control the bus.

It was mentioned that some car devices are using Ethernet for increased bandwidth needs but this is unlikely to completely replace CAN any time soon, due to the increases in wiring requirements back to a hub or router.

Jack showed us the CANbus 8-button, LED-lit device that Collin found.  Each LED ring or backlight is individually controllable over CANbus. 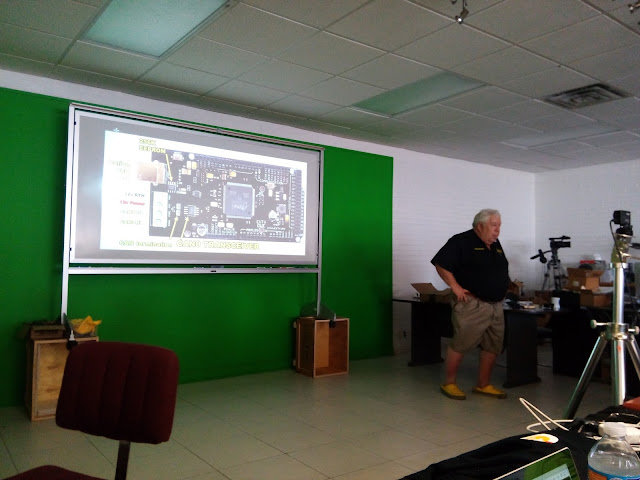 He then discussed the customized Arduino-based controllers that Paulo and Jack have developed.  Jack decided on using the Arduino controller universe due to the open nature, the hundreds of plug-on shields and the programming tools and libraries available.  EVTV developed the "EVTV Due" board, adding isolation and protection on all input and output pins, CAN transceiver chips, an EEPROM for persistent storage and screw terminals for power and CANbus cables.

Jack then showed the Arduino programming tool, displaying a sketch program and described the various aspects of the source code.

Last, Jack showed the Arduino-compatible shield "CanDue 2.0", codenamed "Teodora" for Paulo's mother.  It contains CANBus transceivers for two CANbus buses, Single Wire CAN and has a MicroSD card for logging data.  This is useful if you already have an Arduino board in your design and want to add CANbus handling.  This is useful for capturing data from Tesla cars.

Tom is a speaker again this year, not for his company's DC motor brushes, but for a special brush that prevents corrosion of the bearings in a motor, called a shaft-grounding brush.

Any motor driven by high-frequency Pulse-Width-Modulation is susceptible.  Motors get current and voltage induced into the rotor.  This energy tries to go somewhere and it normally finds a path from the rotor, through the bearing and into the metal shell of the motor which is usually bolted to a grounded part of the vehicle. 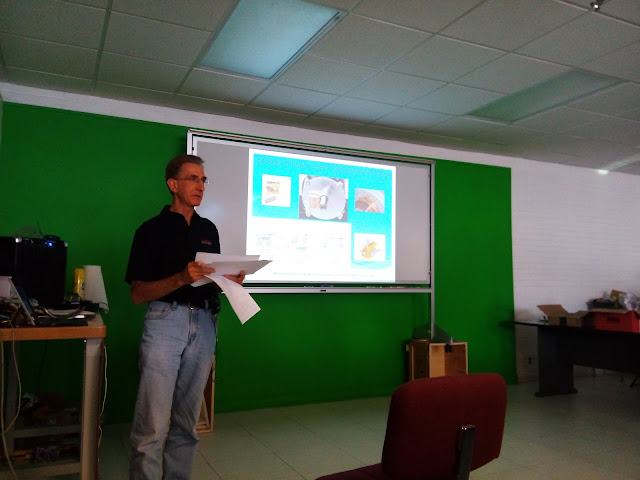 This added brush acts as the least-resistant path to ground, sacrificing itself to save the bearings.  Testing has shown very little wear on this brush, about 1/1000" loss during 6 weeks of continuous running.  The brush on one motor in use for 10 years wore only about 1/2".  The brush material is 91% silver, so they are quite expensive.  Tom wouldn't commit to a price.

There is no need to "seat" the brush for full effectiveness.  The brushes can be mounted so they contact the shaft or the face of the rotor, depending on available space.  The "other" bearing will have very small residual current and voltage which can be completely removed by adding a brush on the other bearing also but this may be cost-prohibitive.

Tonight is hang-around-the-shop and dinner on our own.
Posted by Michael Brown at 7:17 AM No comments:

Today is the official start of EVCCON 2015, with the day dedicated to folks rolling in through the day and a welcome reception with drinks and snacks at 5 PM.

A strong number of cars were brought this year either under their own power if local, or trailered in from further away.

The highlight of the day was watching the live streaming of the Tesla Model X reveal and initial customer deliveries. 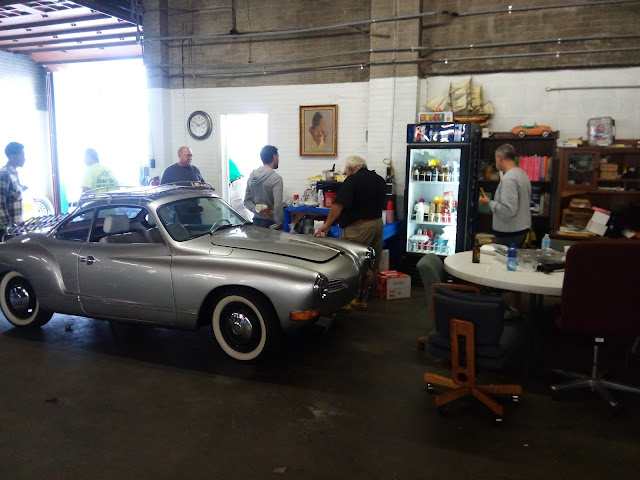 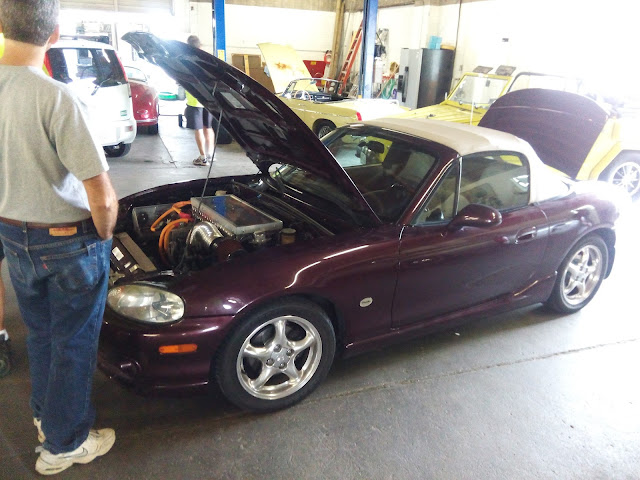 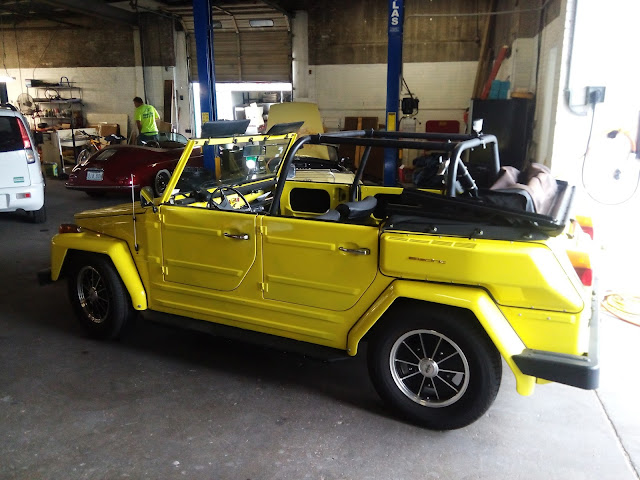 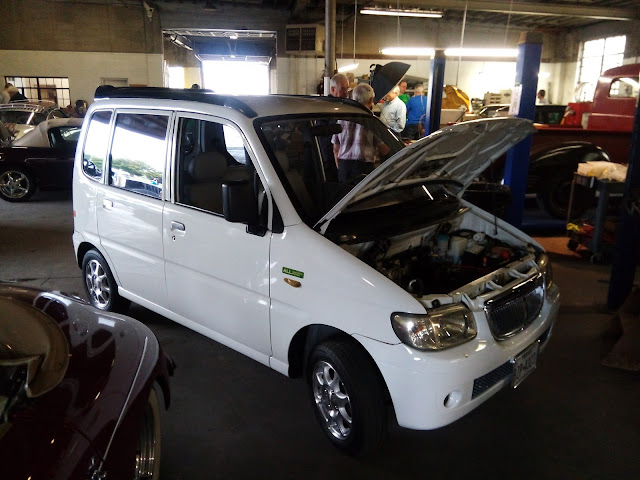 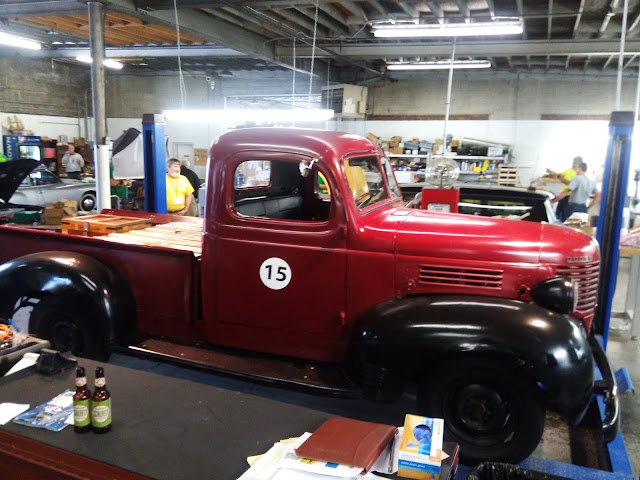 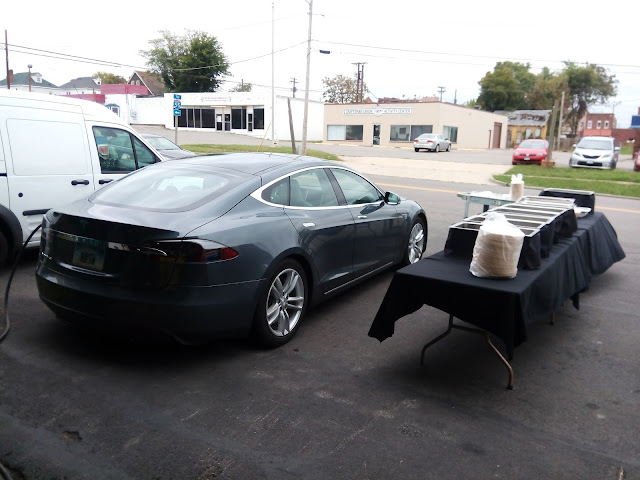 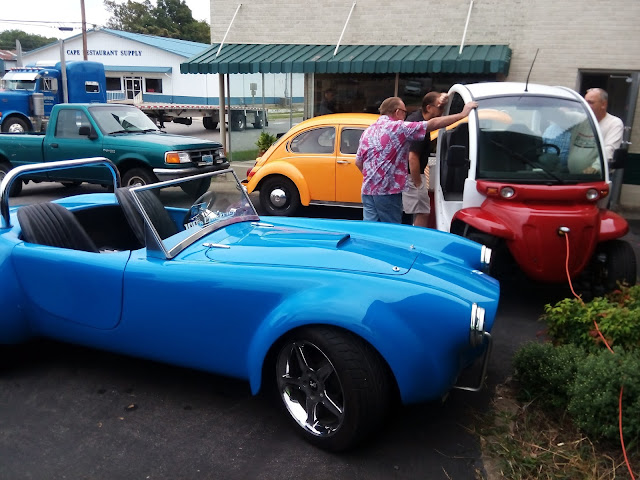 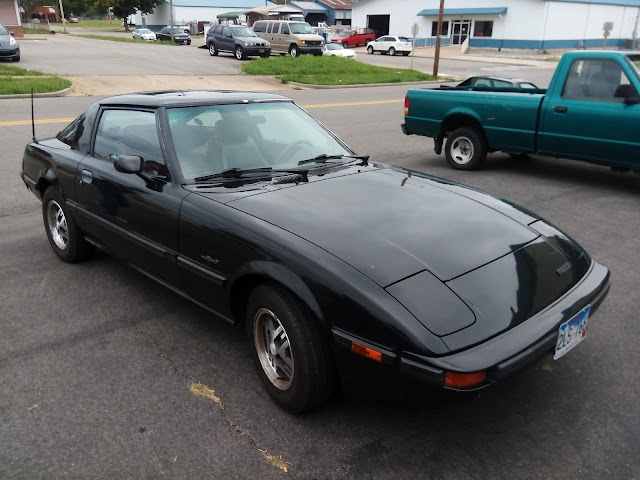 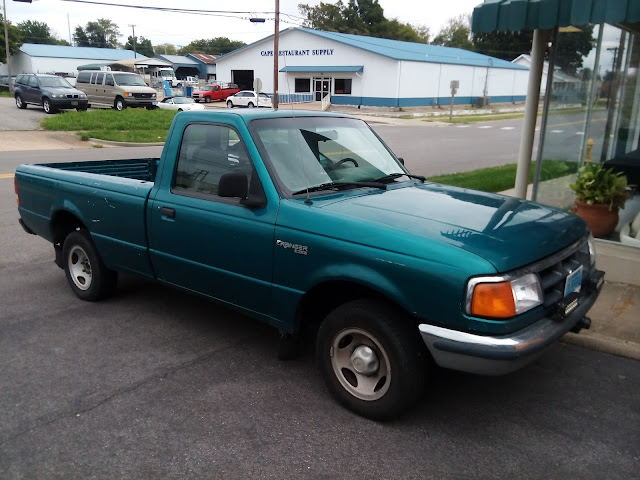 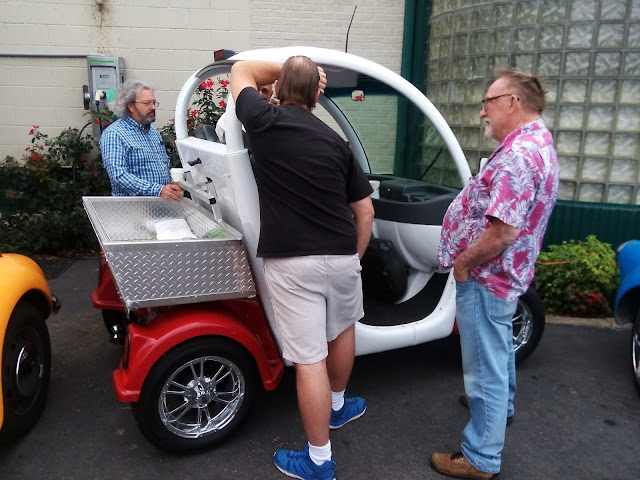 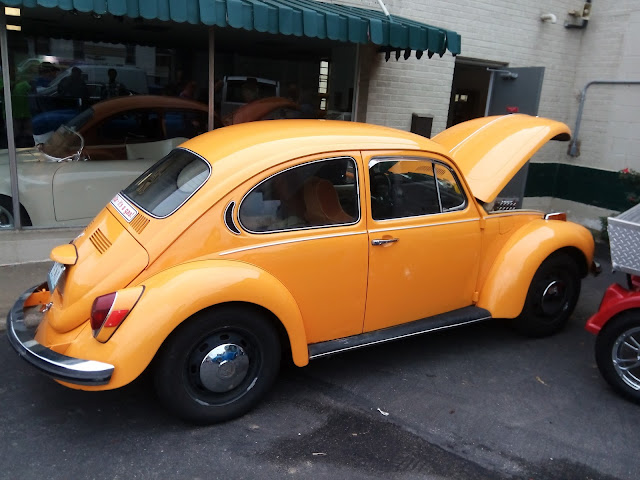 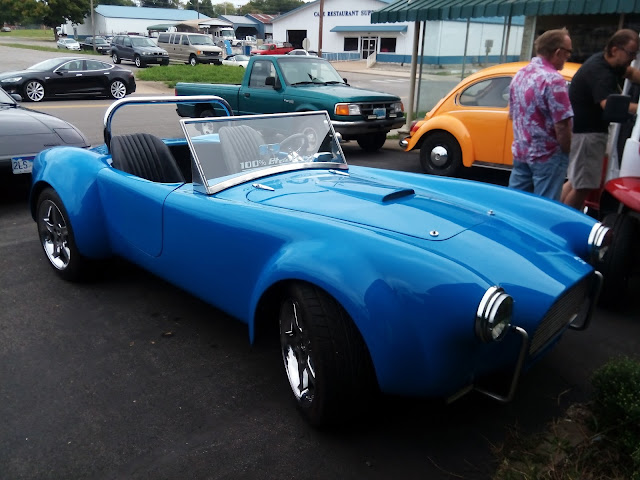 Posted by Michael Brown at 7:16 AM No comments:

After a year of anticipation of EVCCON 2015, and locking in that week in the schedule of my 7 month around-the-world trip, Jack posted 13 days before the event that it was cancelled due to lack of an insurance policy.  You can read Jack's message to the attendees here.

Well very soon it became apparent that most of us were still going to come anyway, so Jack decided he would host everything at the EVTV workshop rather than having sessions at the AC Brace arena and the drag strip and autocross at the airport.  Sessions will now be held in the EVTV video studio and we'll be able to freely wander the workshop and get our hands dirty working on cars.  Saturday night we'll head over to the nearby 1/4 mile dragstrip and go racing, which we previously did on the last Sunday morning of the show.

Leaving California, I arrived at the hotel late Sunday night and went over to the EVTV workshop on Monday morning.  Three of us had arrived a day early and spent our time cleaning up the seating and drinks cooler area.  We made a run to Sam's Club and stocked up on soda, beer and paper products. 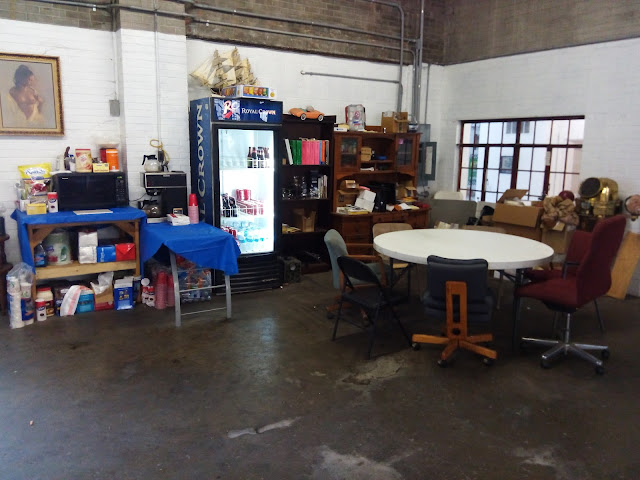 At the end of the day, Jack suggested we go to a local Japanese restaurant that serves mostly Chinese food and is run by Koreans.  It turned out to be a disaster, don't think any of us will be going there again!
Posted by Michael Brown at 7:15 AM No comments:

Tour of the Tesla Factory

Yes, wishes do come true!  I scored a tour of the Tesla factory and did a video report on everything I saw.  Enjoy! 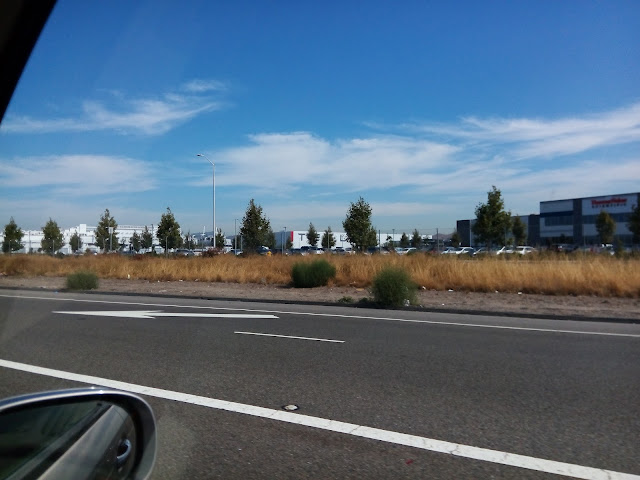 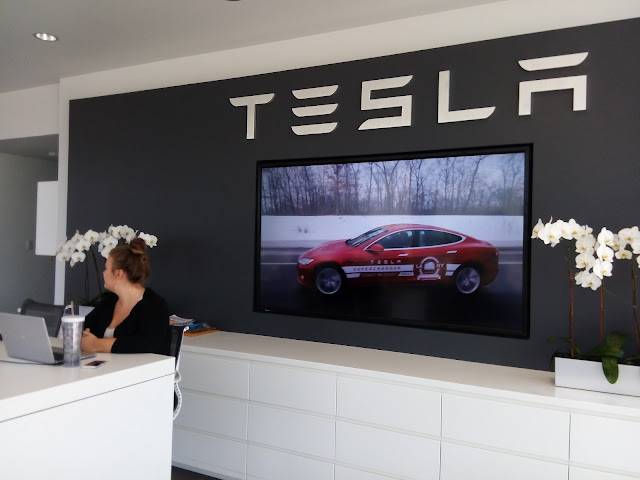 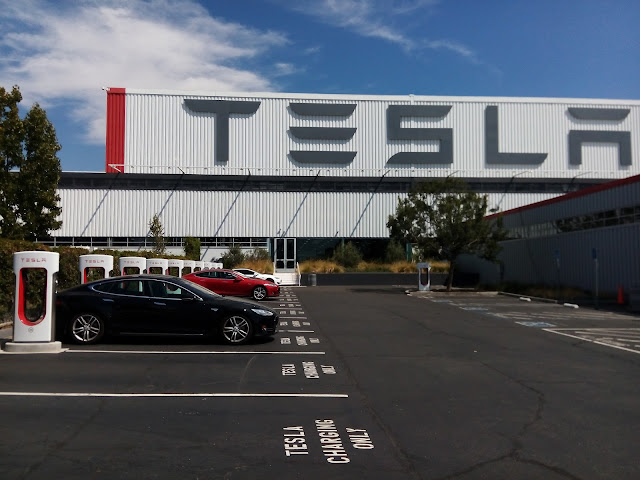 Posted by Michael Brown at 9:53 PM No comments: