More Teslas In The Wild

It's been a long time since my last update because I haven't really worked on the 914 much, as there's little left to do on it.  I take it out on the weekends for drives into town and around the back roads to my favorite winery.  The next post will probably be from the Porsche club autocross in late April, and I've got the 914 entered so we'll see how she does against the gas boys.

I did feel the need to make a new post though, because I'm seeing Tesla Model S cars everywhere I go now.  Maybe it's because I live in California but my little town of San Luis Obispo has at least 4 of them.  Here's one that followed me into a restaurant parking lot a few weeks ago.  The owner had just had it delivered the day before in Los Angeles and he was on his way north to visit family.  That's 190 miles and he said he had about 75 miles of charge left, and it was all highway speed! 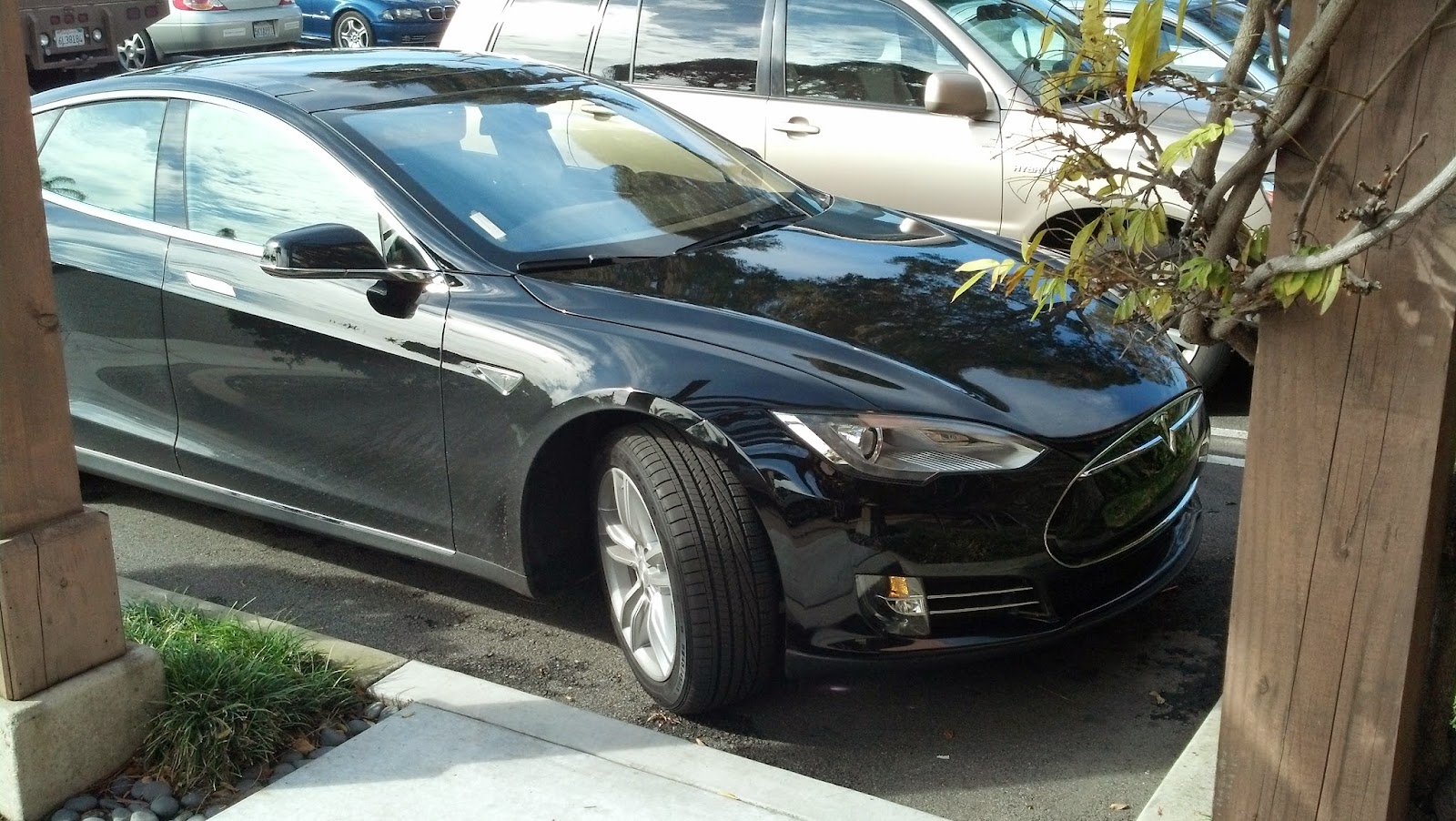 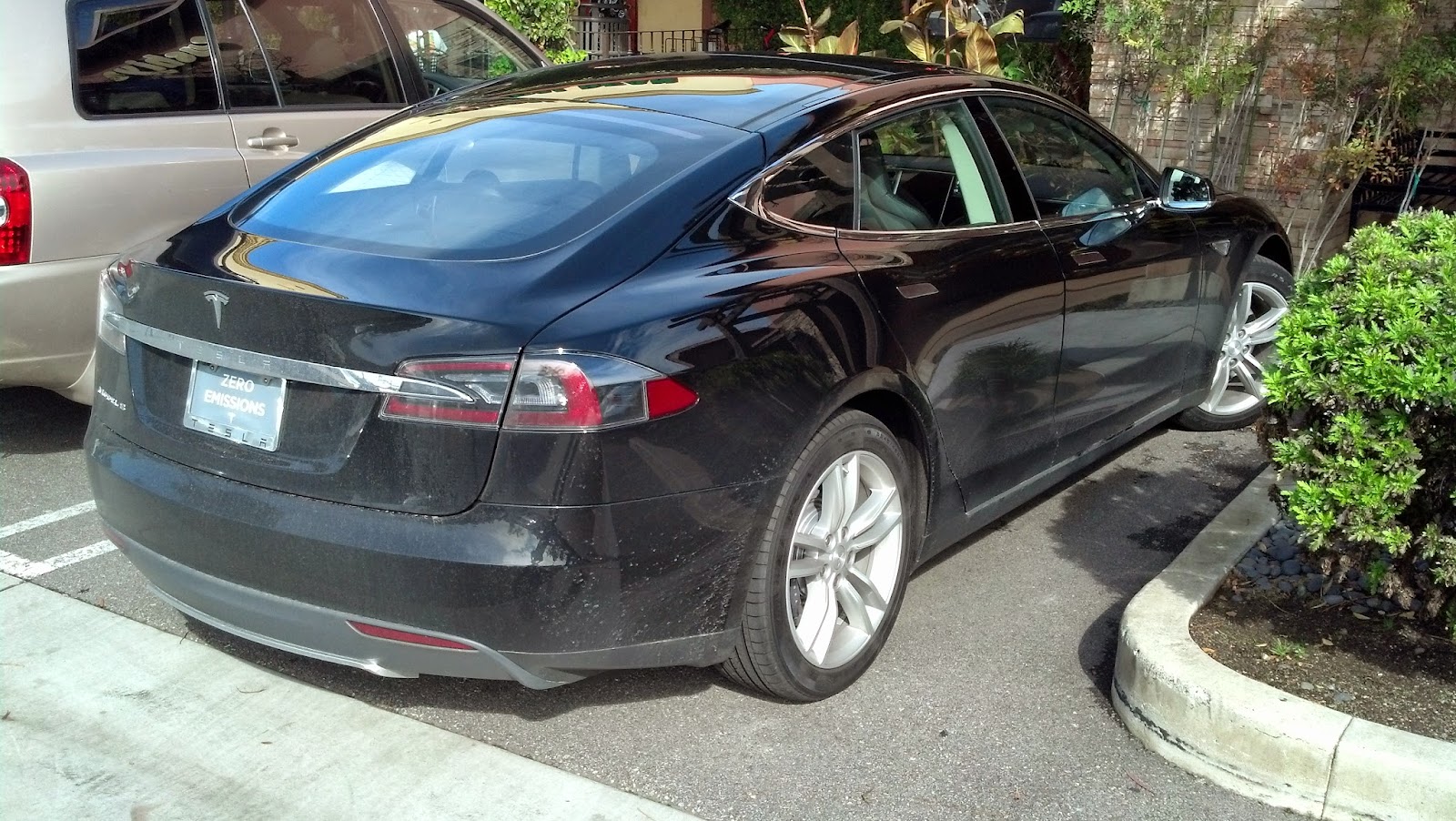 A few weeks ago I was working on the solar power monitoring system at three Costco stores in the Denver area when I realized the Tesla showroom was in a mall directly across the street from one of the Costcos.  Ironically, it's located right across from the Apple Store, which was also designed by George Blankenship.

I spent a couple of hours hanging out with the staff there.  This was the next day after the now-debunked New York Times article came out, but before Tesla had released their analysis of the trip. 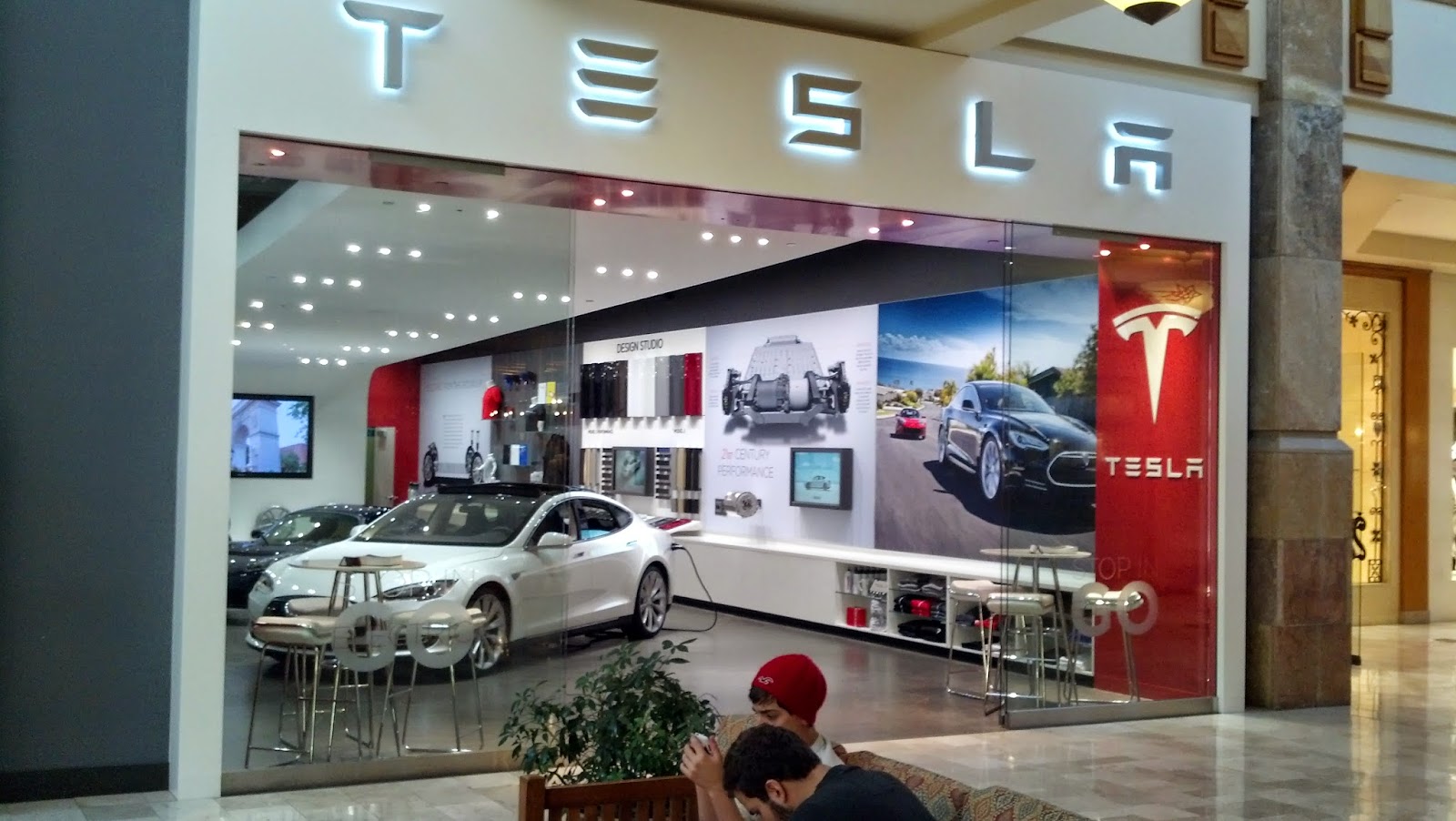 We talked about the article, the design of the Model S, the Roadster, the state of the company, how my shares were doing (up 30% thank you), my 914 and the electric-car-knowledge of the average person walking into the store.  The guys were great with the people who came in, answering every question clearly and without bias, and dispelling every myth.  They let everyone sit in it, and frankly I wouldn't have let some of them, but you never know who is going to grow up and be in the market in 10 years.  When they were busy, folks would come over to me and start asking questions... I was quick to tell them that I wasn't an employee, but I did know a lot about the cars.  Maybe I should consider applying for a job? 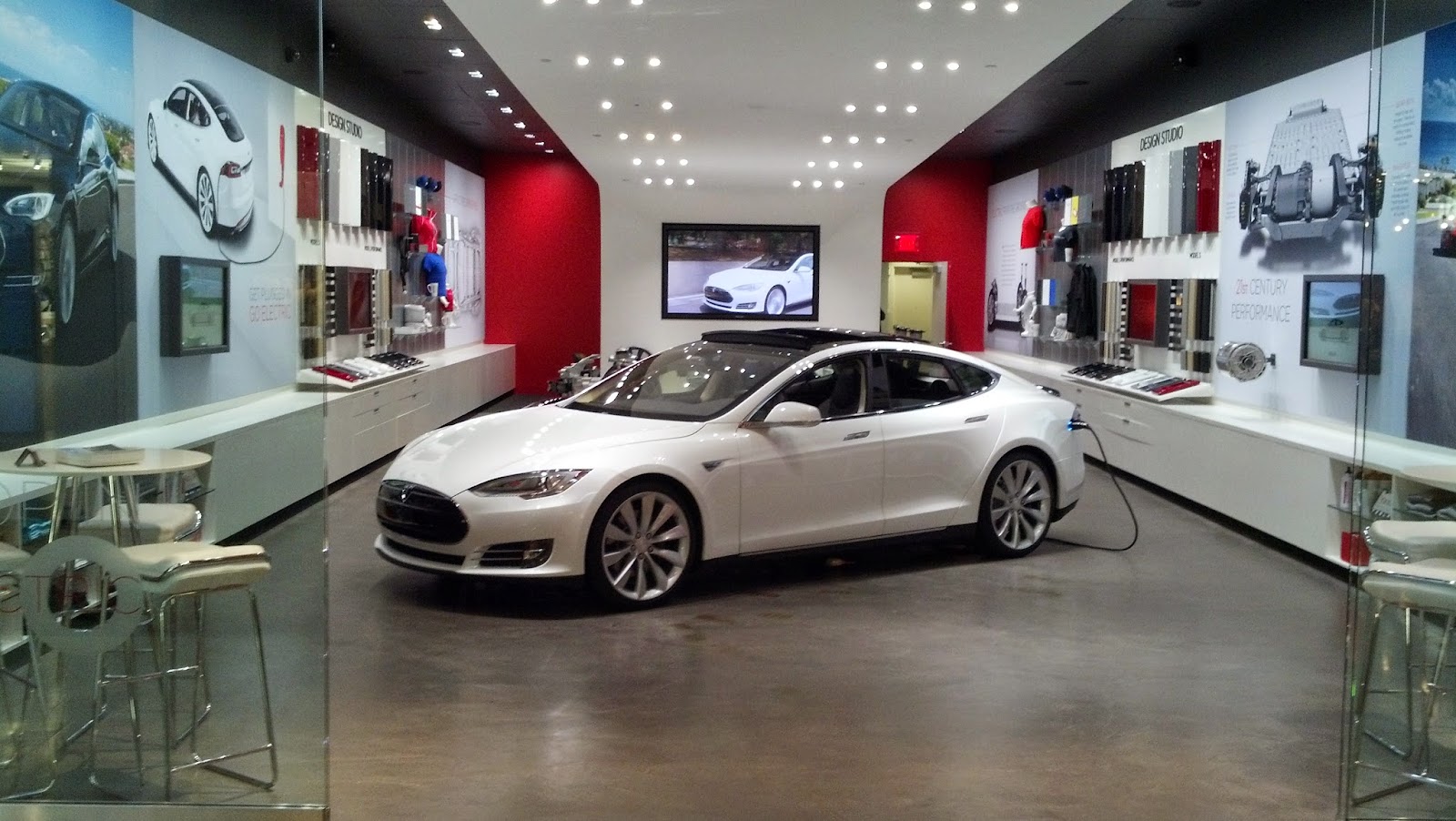 Most people who didn't know what a Tesla was were impressed with the body, the 17" display and the pure-electric design.  Those who had a deeper understanding looked like they just walked into a candy store with an all-you-can-eat gift card.  That's definitely how I felt, just being in the room.  A few were dead-set against electric cars and it became quickly clear that no amount of fact could battle the brainwashing they'd been subject to.  They just got in their 4x4 trucks and went to the gas station on the way home I guess.

As you can see, they had a production-line Model S, a trade-in Roadster with 4,000 miles on it for $70-$80K, and a rolling chassis with battery pack, transmission and motor.  The chassis really helps people visualize the simplicity of the design - take this, add seats and a metal shell and you've pretty much got the car.

The staff said Tesla was a great company to work for, and I'm glad to hear that.  One of the guys was an economics & marketing student who was very knowledgeable about the pros and cons of electric transportation. 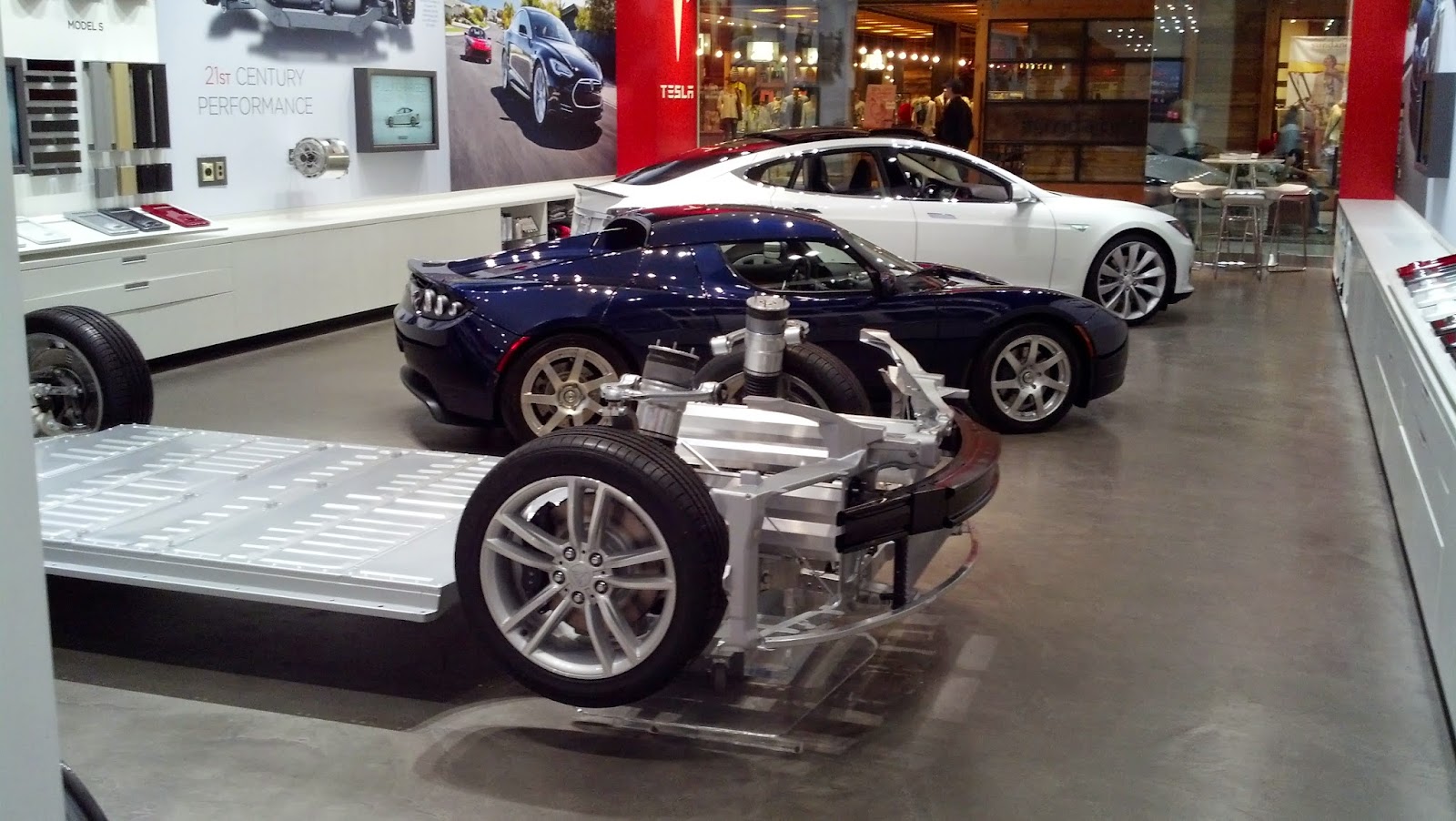 After work the next day I went downtown, and saw this one on the top floor of a parking garage.  They're everywhere! 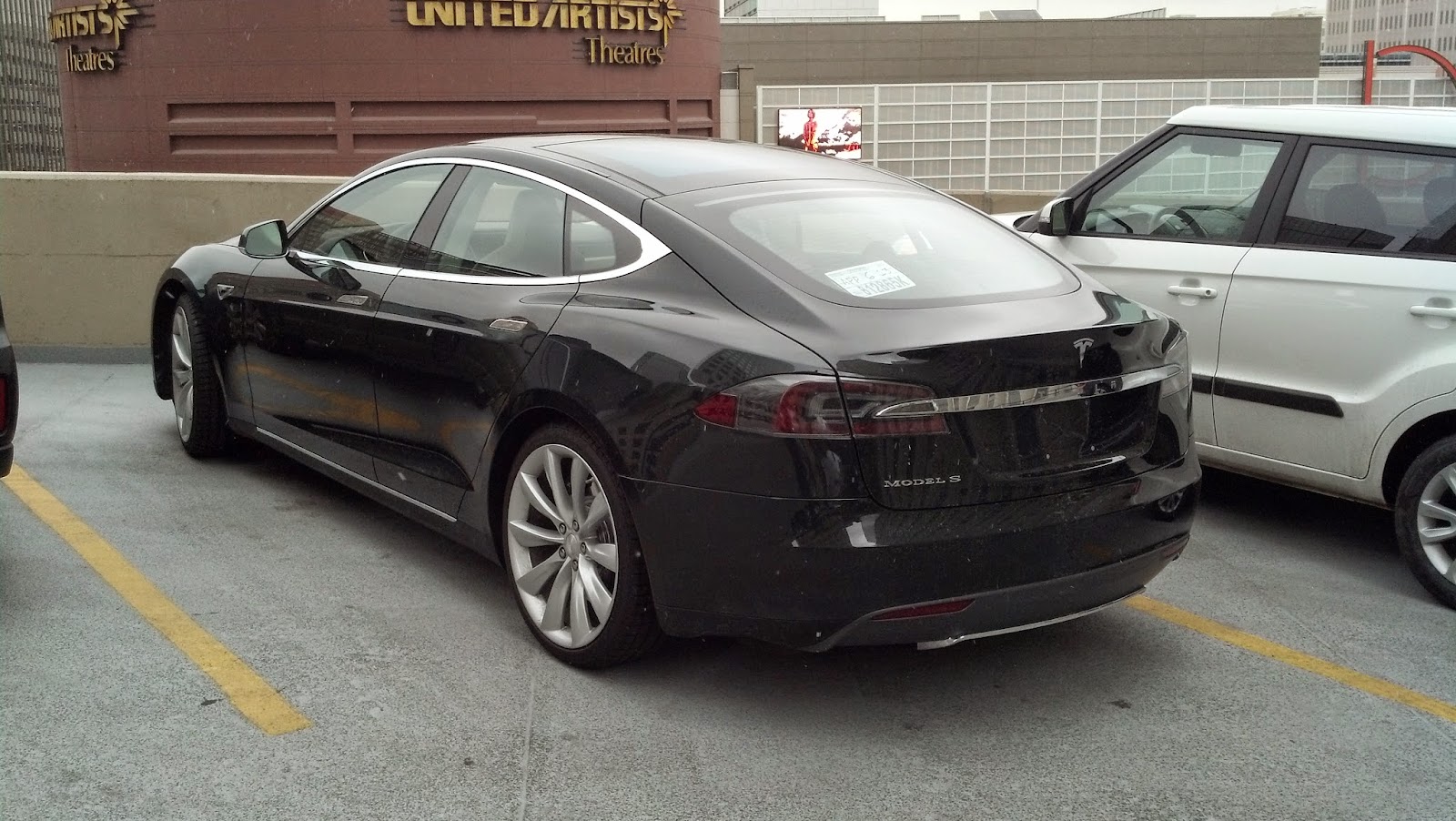 Now we come to the Holy Grail of Teslas.  What is a group of Teslas called?  An Amp of Teslas?  An Elon of Teslas?  A Torque of Teslas?  How about a car-hauler of Teslas!  I was driving through the next town over of Atascadero California last Sunday, and I approached a car-hauler trailer parked on the side of the road.  From a distance the tails of the cars look familiar.  As I got closer I couldn't believe it.  I pulled to the front and parked.  There are 7 Tesla Model Ss on there! 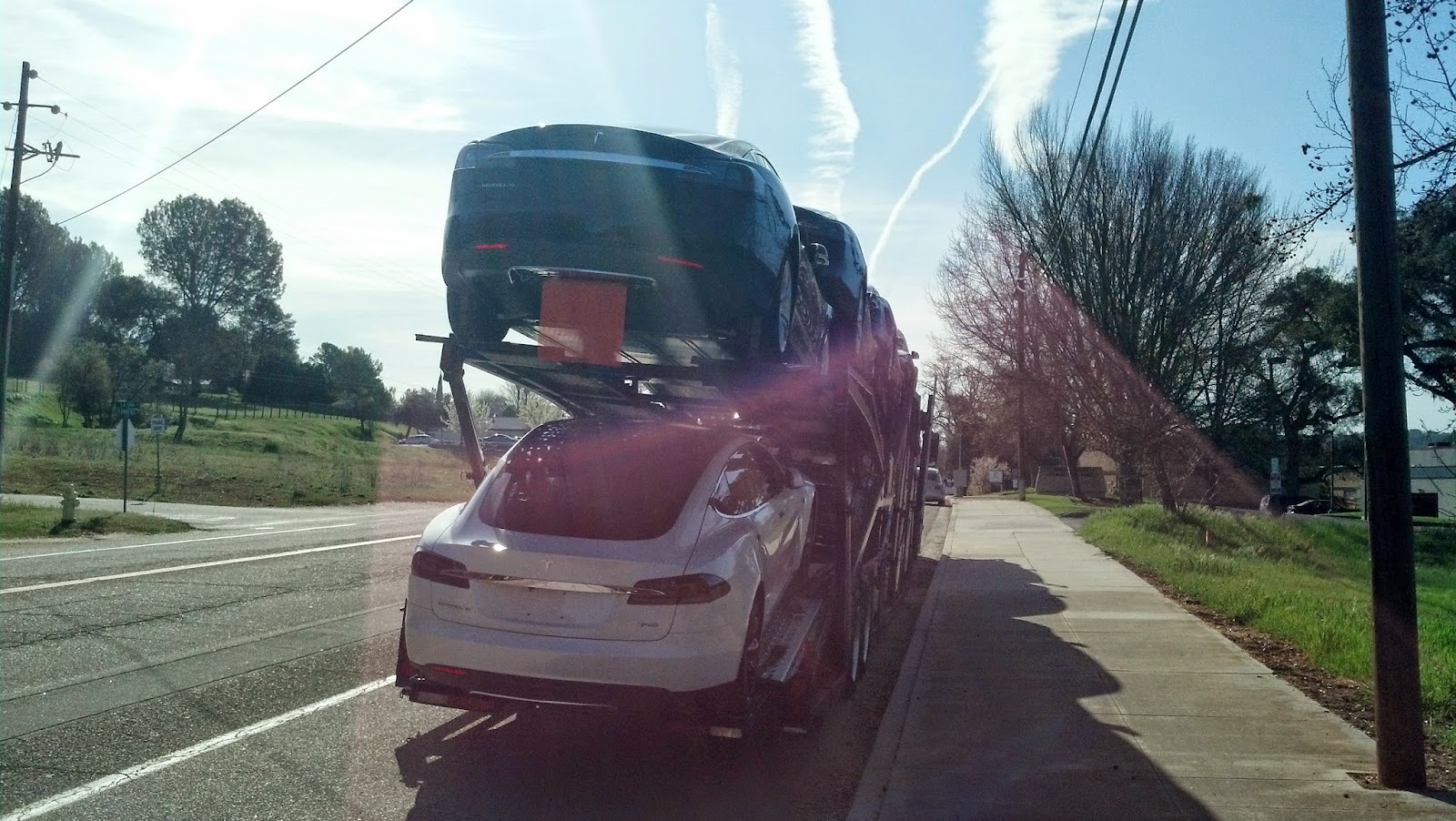 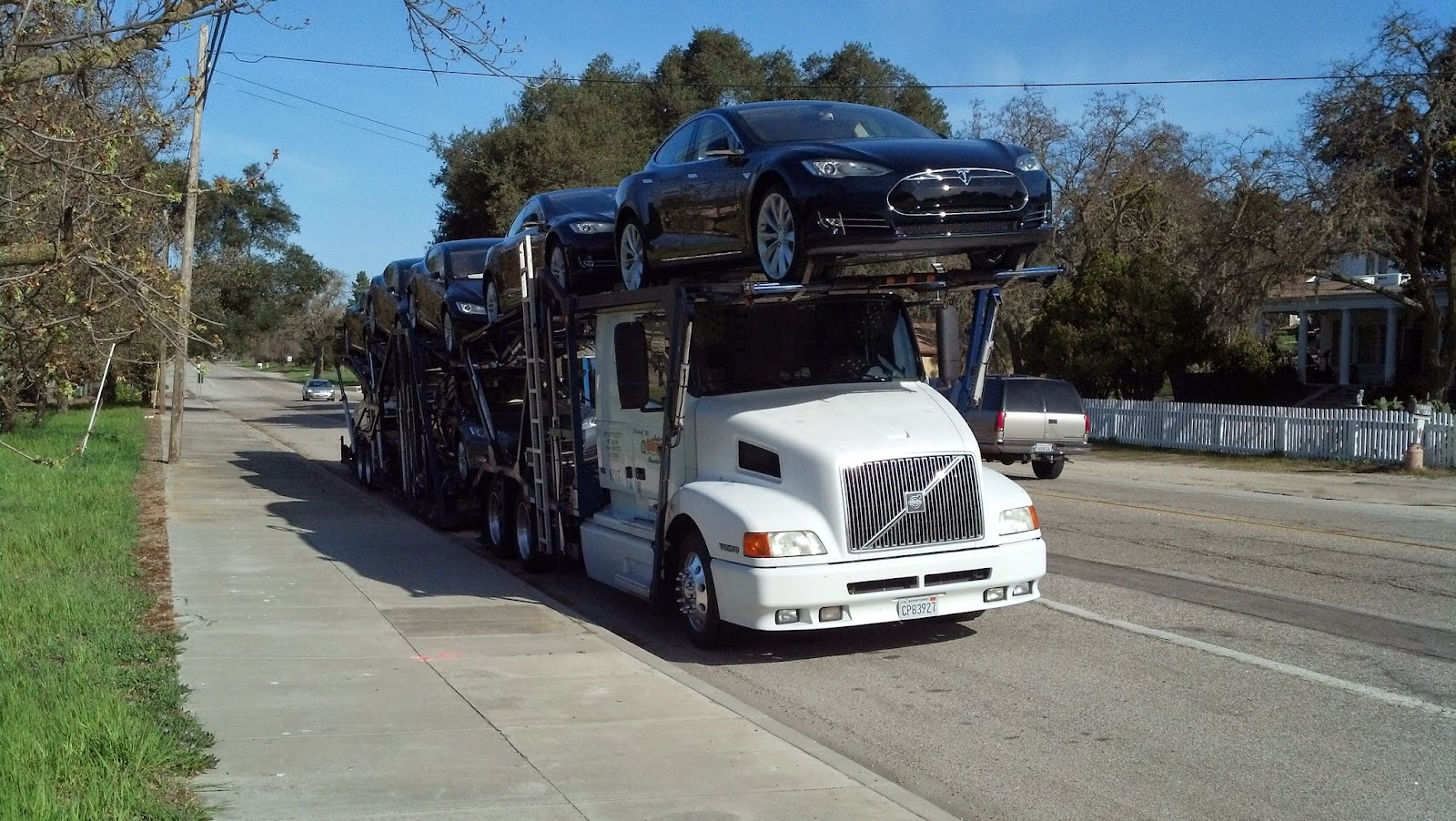 There were two different models represented, designated by the badging on the rear.  Here's a P85, meaning Performance model, 85 KWH battery pack. 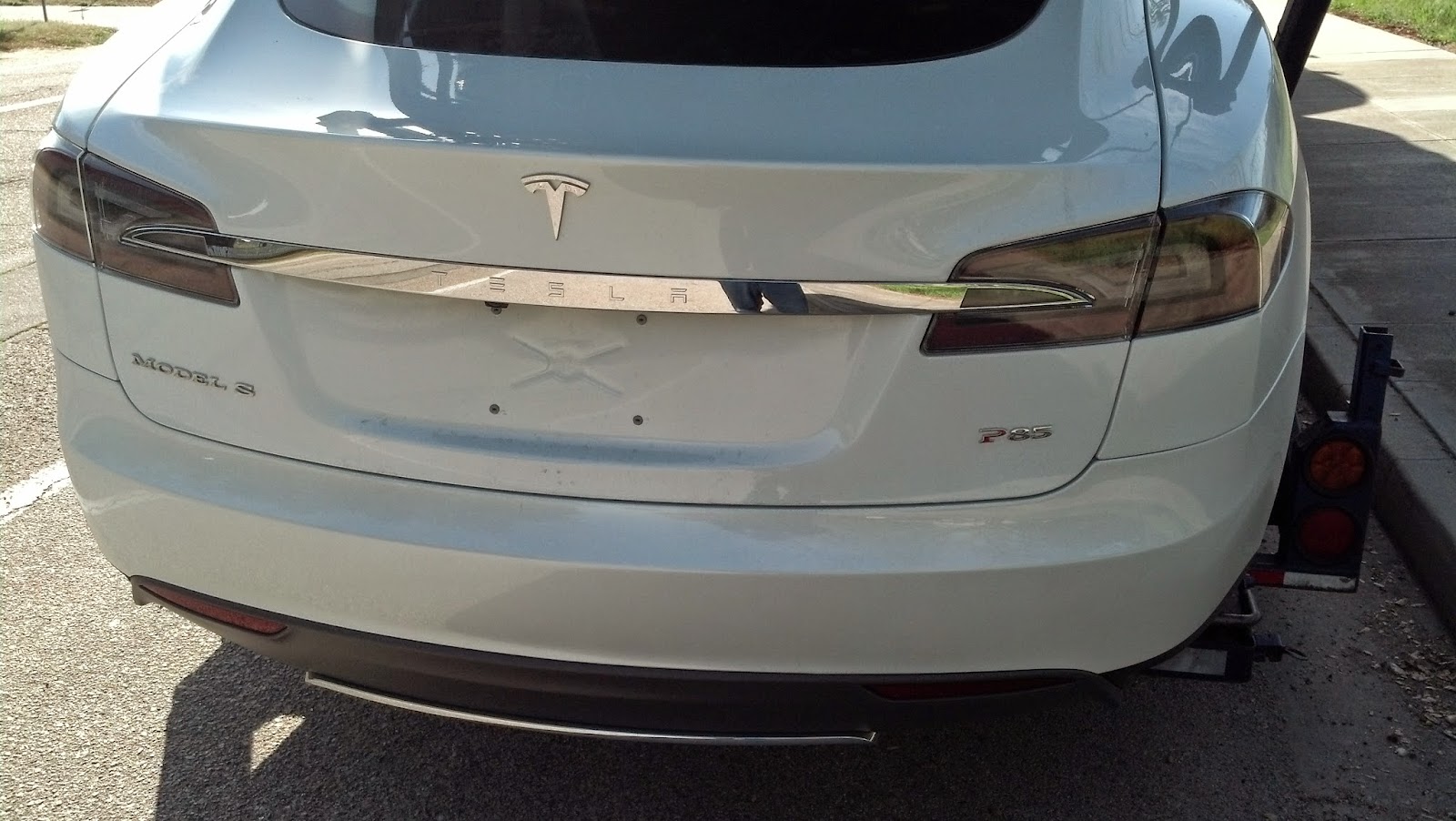 Here's an 85, meaning standard performance, 85 KWH battery pack.  That is a great-looking metallic silver, but alert readers will know I'm partial to that color... 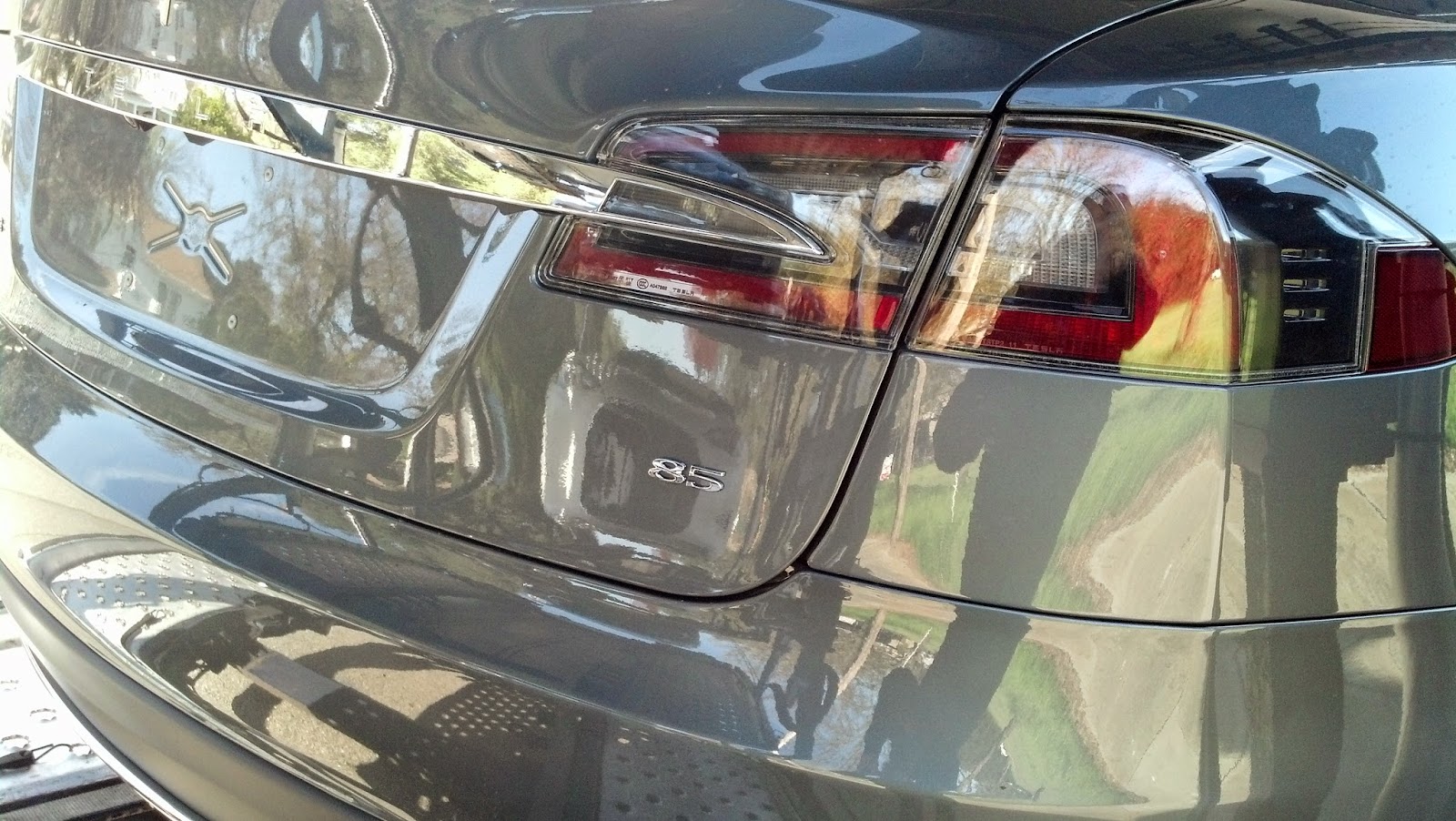 Here they are from the front, a great selection of colors. 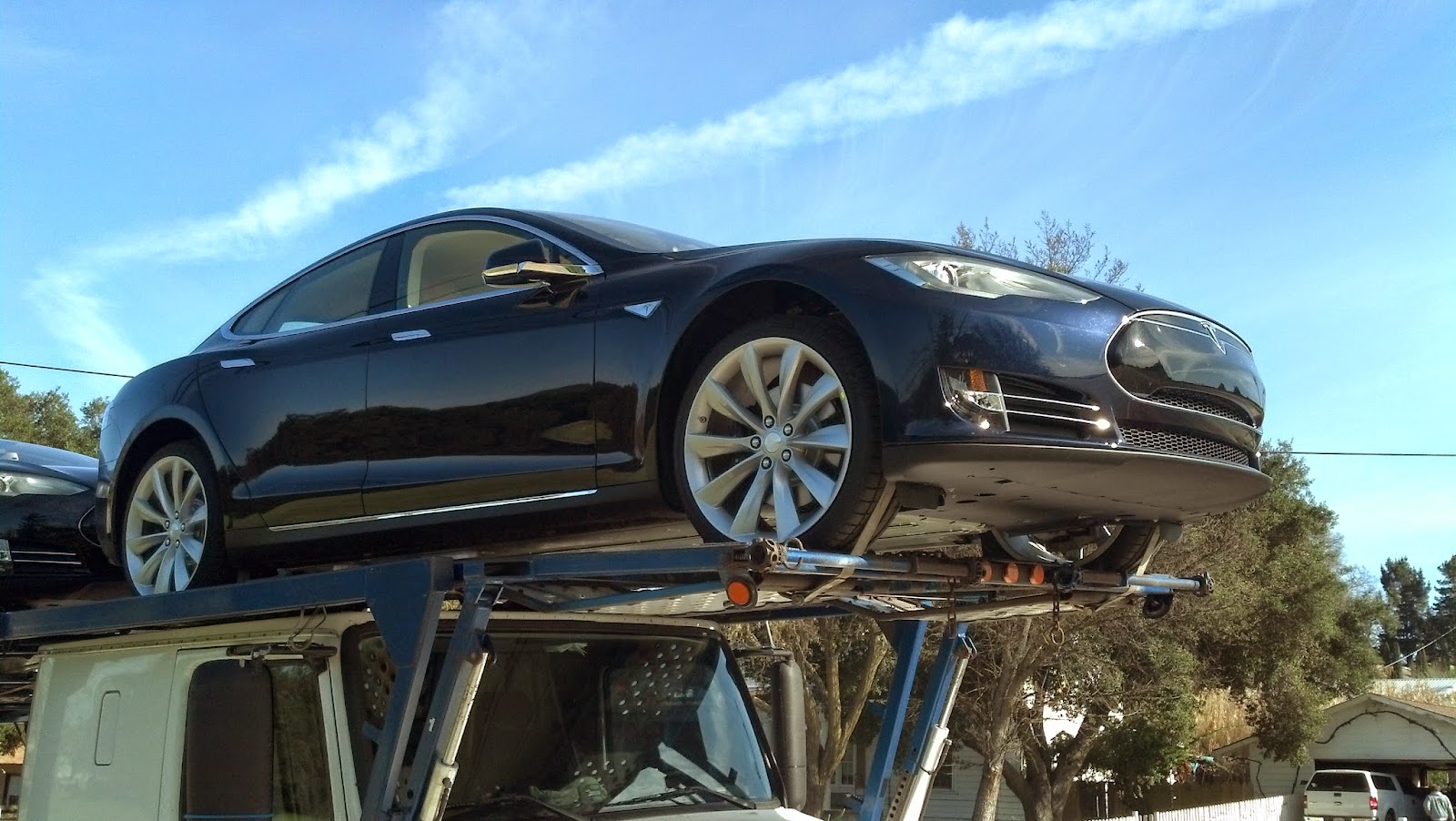 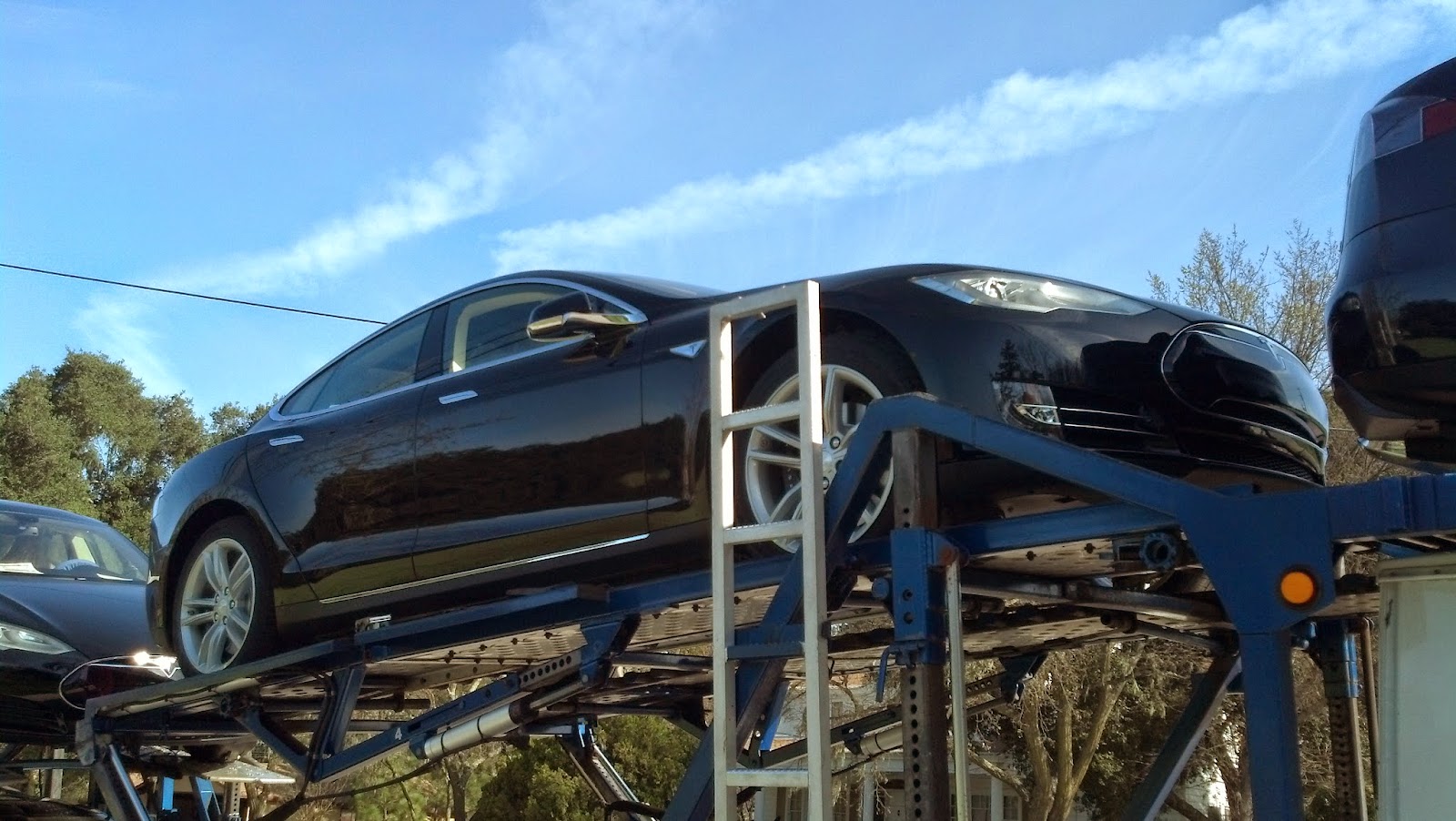 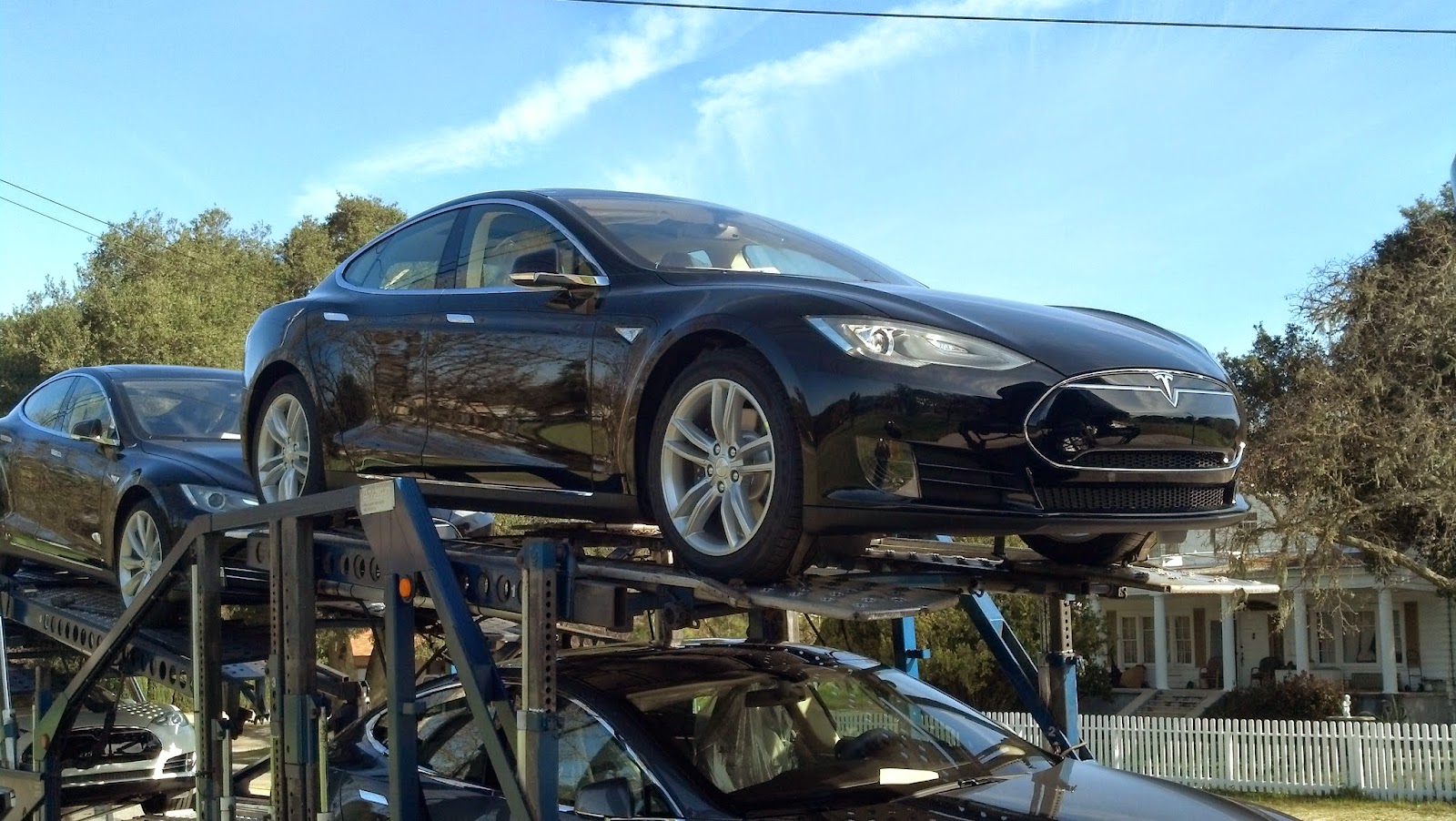 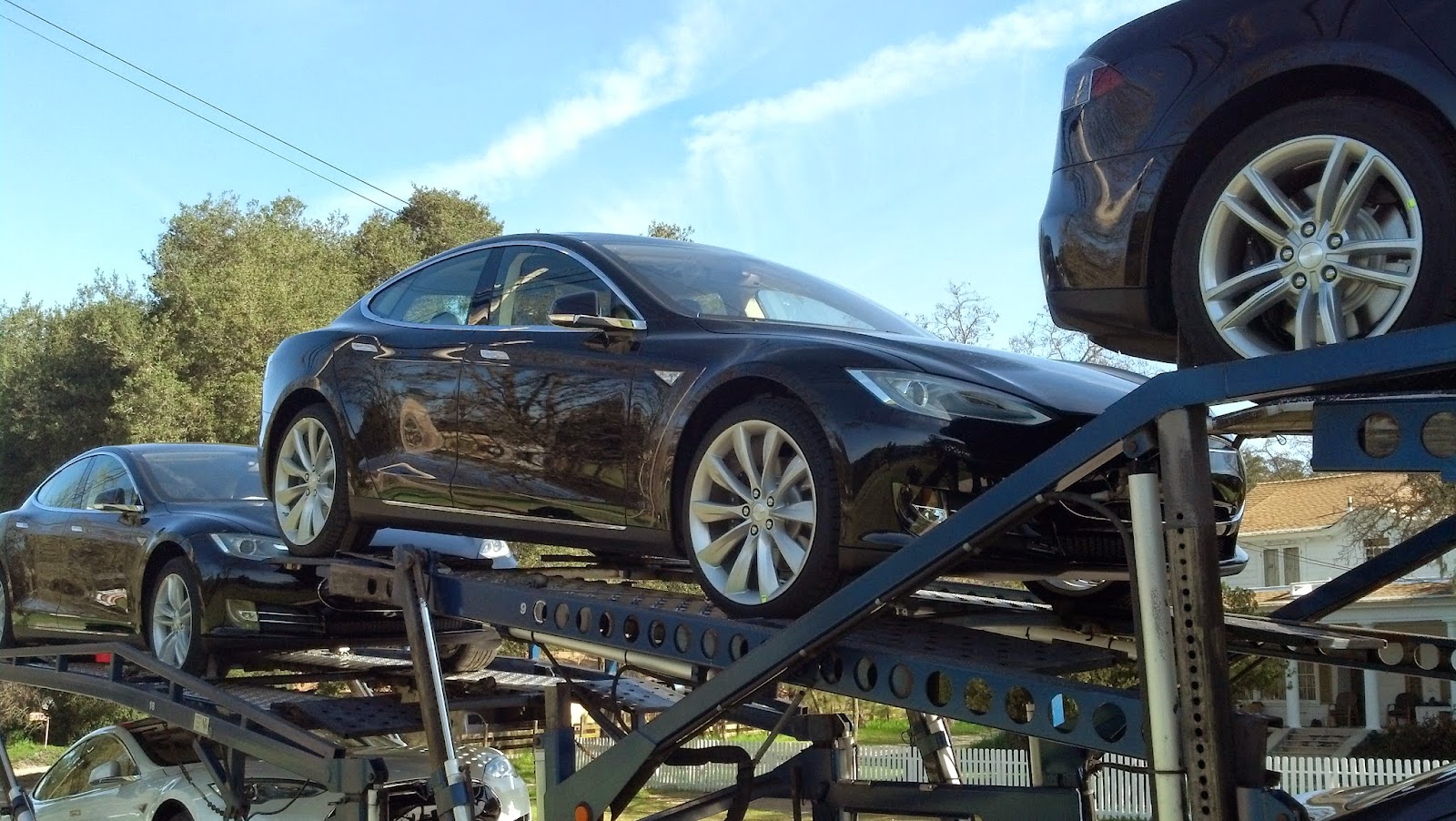 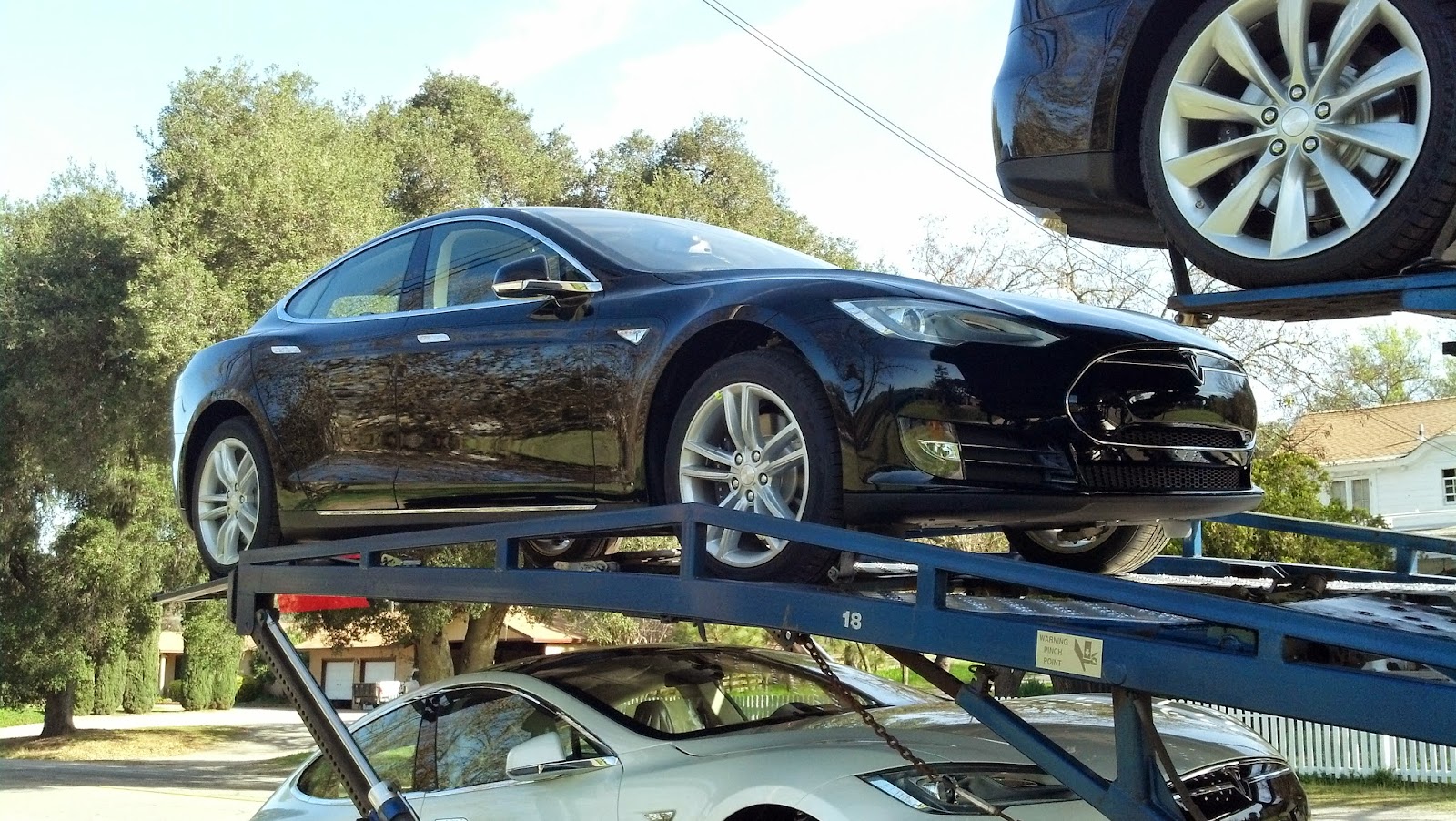 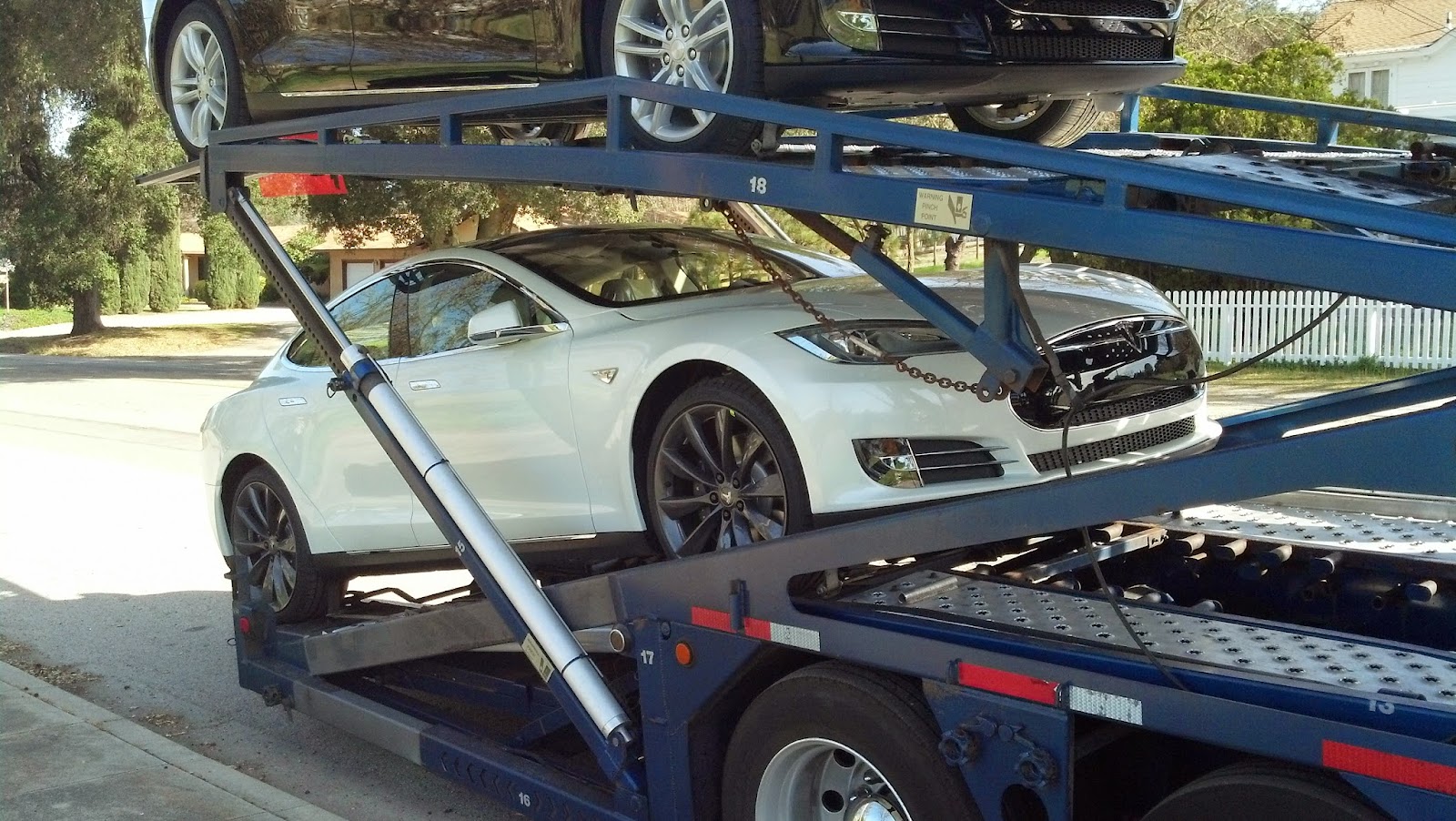 This was also my best opportunity yet to see the undercarriage of a real Model S, to see how they engineered the floorpan to minimize drag and maybe even increase downforce a la Formula 1.  This is a shot from the rear of the car.  You can see the black plastic undertray parts, which fit together to give a nearly seamless fit, then the silver bottom of the structural-member battery pack begins, running forward. 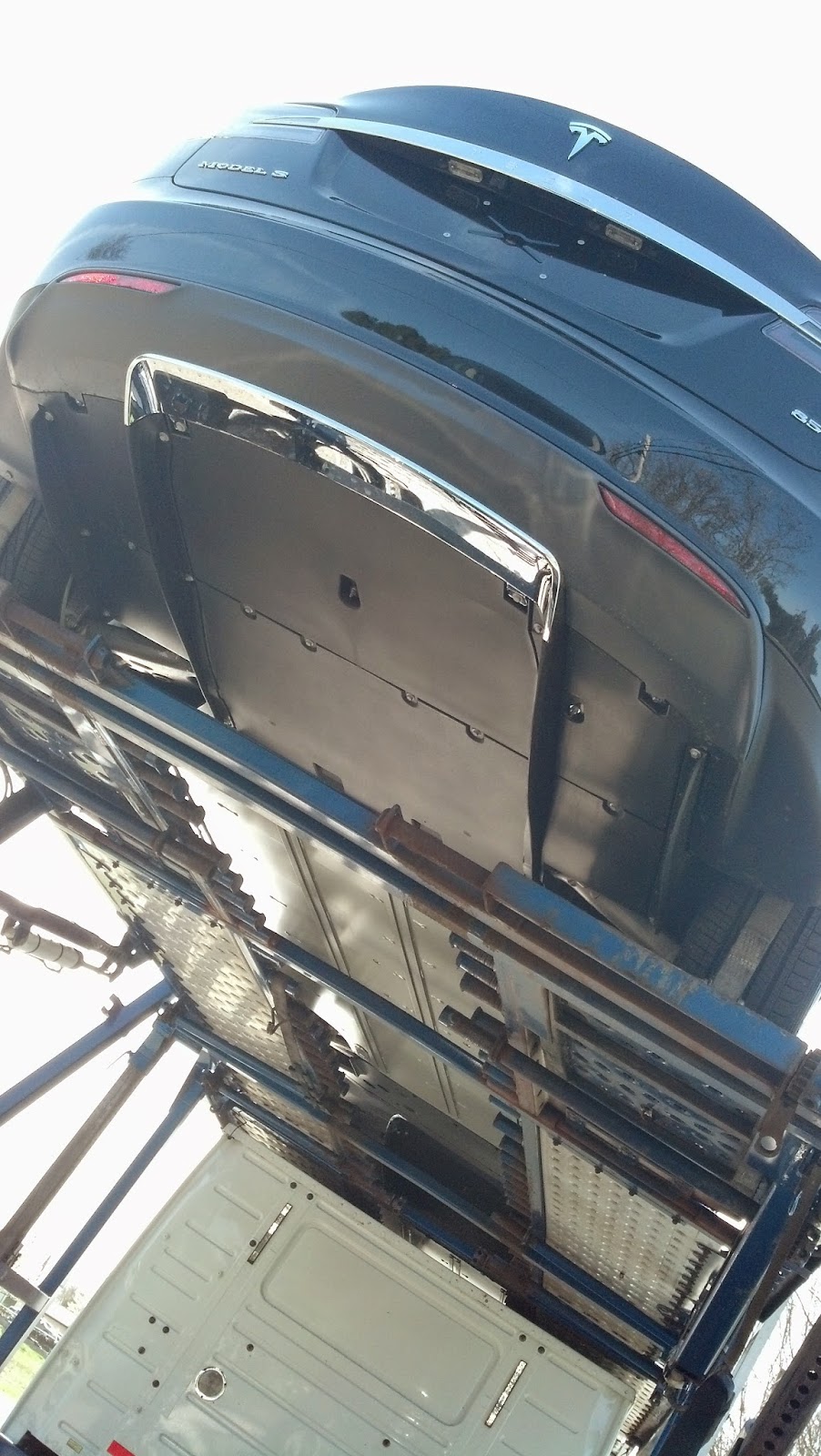 This is from the front, looking back.  You can see the open areas around the lower parts of the front suspension, providing clearance for the up/down motion and tire pivoting. 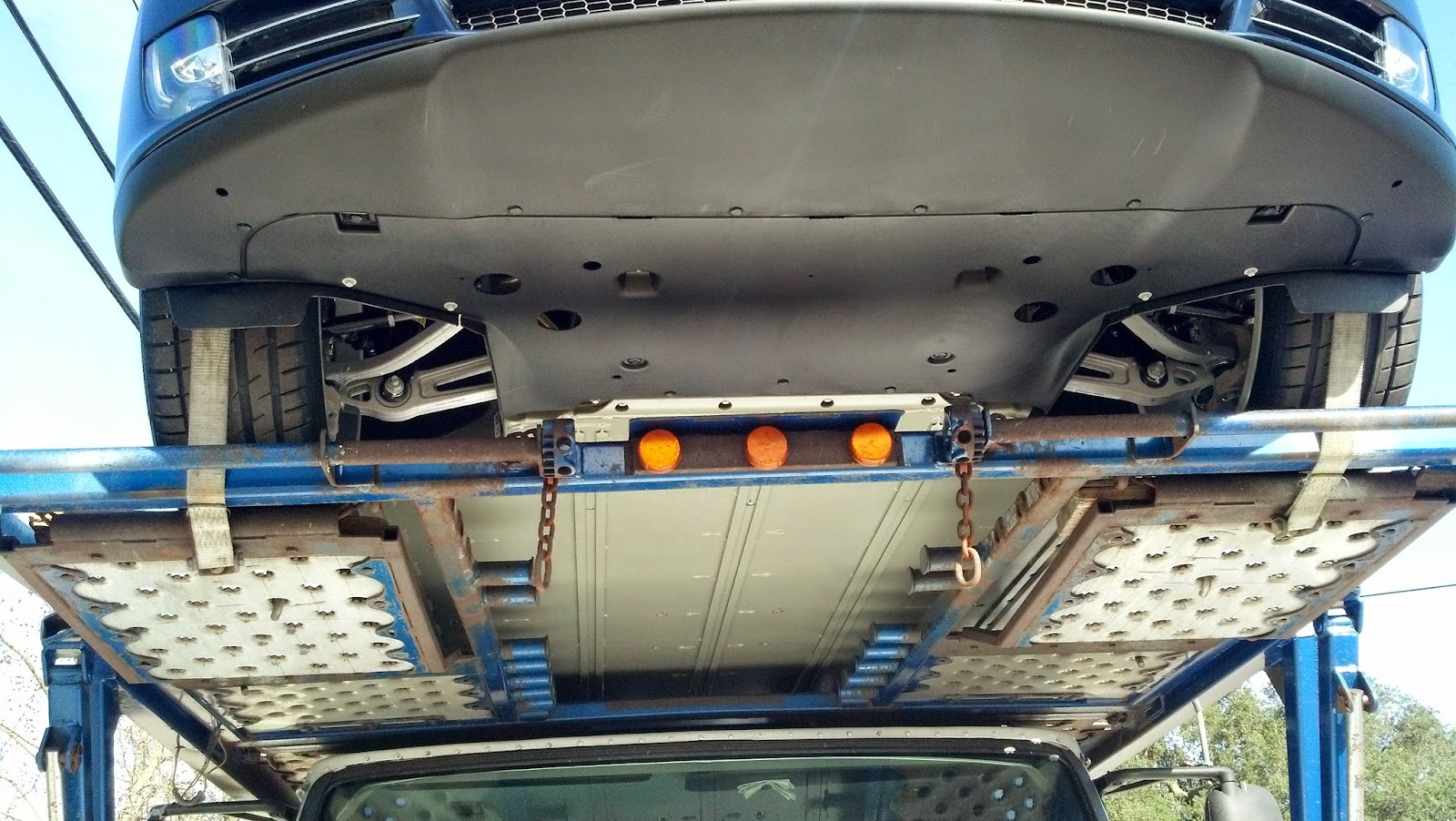 Here's a closeup of the passenger side front wheel area.  I wonder what those two access holes are for, and why they didn't bother to put a cover over them.  Maybe they're drip holes for the air conditioning system? 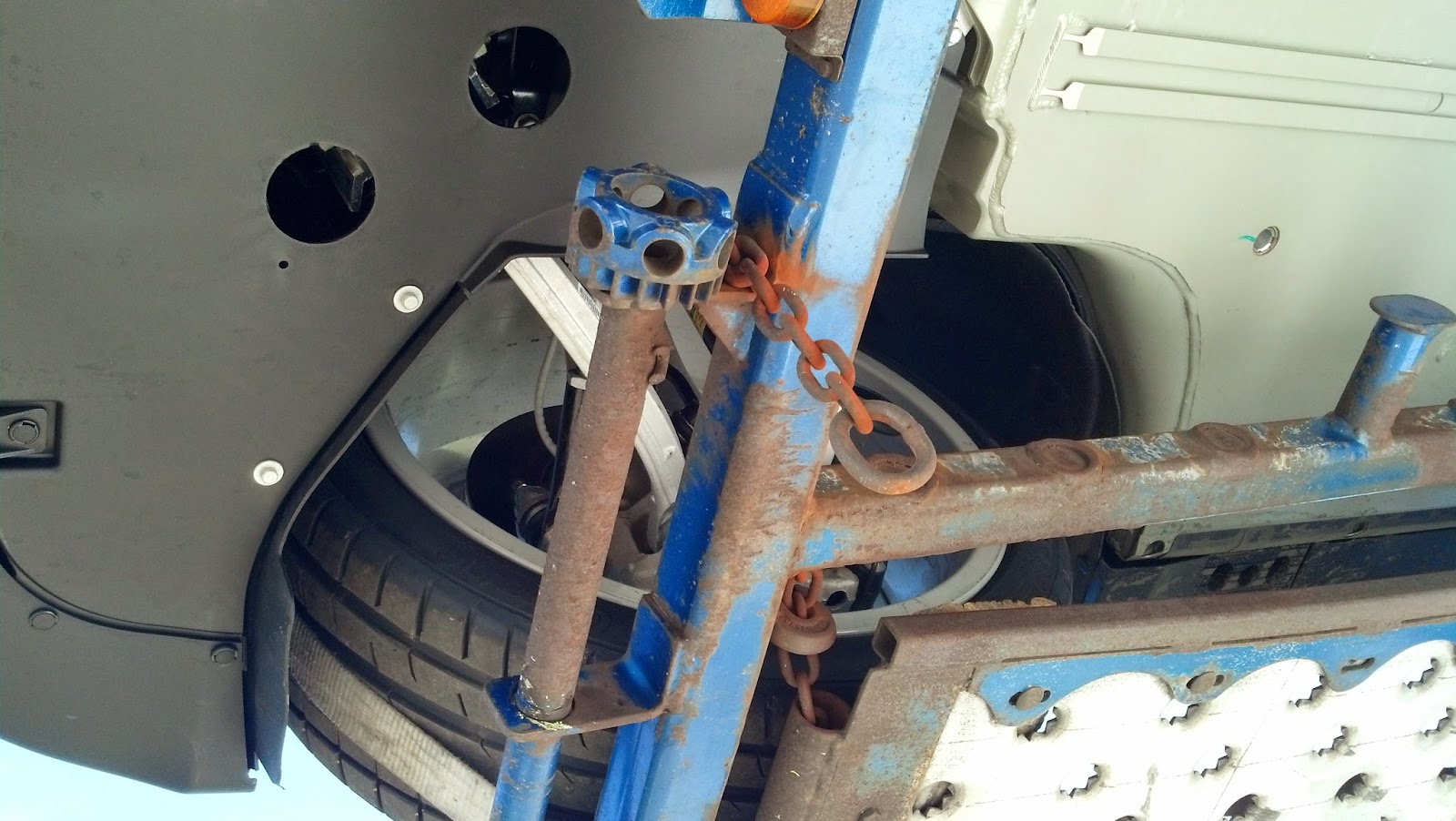 Here's another angle of this area: 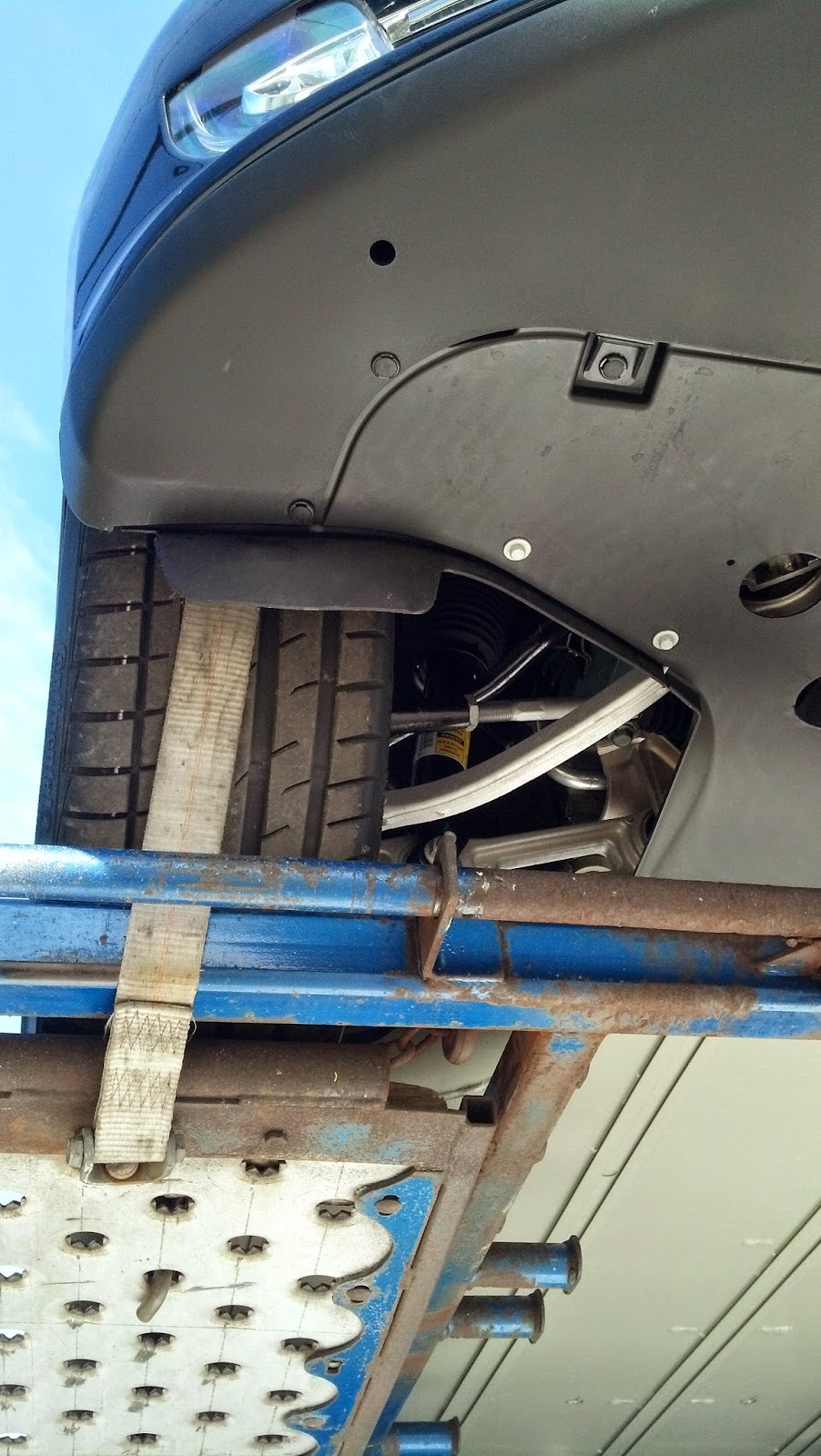 And here they are from the side.  3/4 of a million dollars worth of electric sex.  The hauler was still there when I drove back down the street at 4 PM, so the driver must have spent the day in the area, then headed off to his deliveries on Monday morning.  Ah, that really made my day. 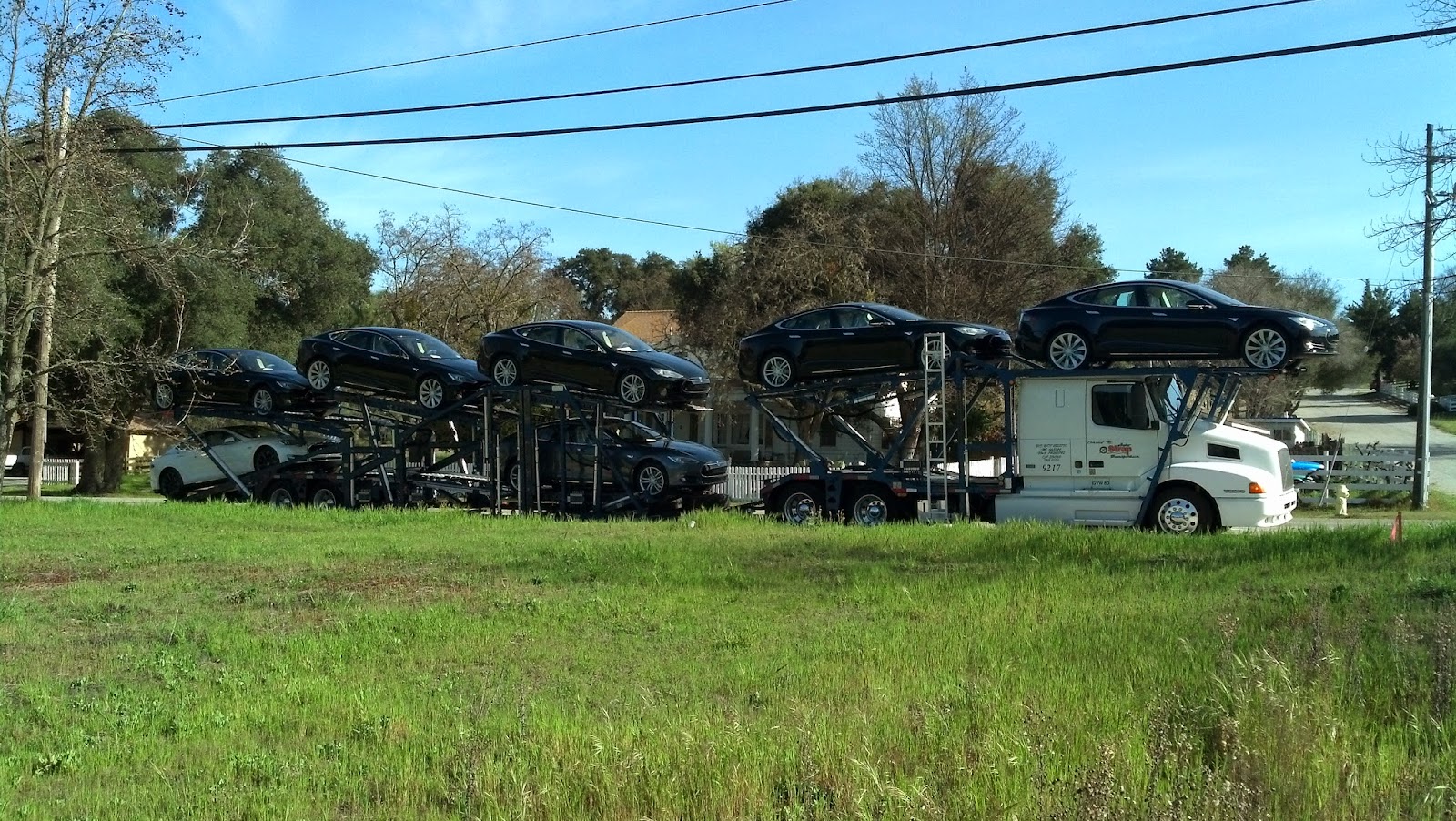