My visit to Toyotron Electric Motorbikes in Bangkok

After building the electric 914 and planning a move to Thailand, I was very interested in the state of electric vehicles there, again trying to avoid gasoline-powered transportation.  What I found was disheartening...  There are no pure-electric cars for sale, not even the Nissan Leaf despite Nissan dealers everywhere.  I did find one electric golf cart shop that had an electric scooter from Toyotron www.toyotron.com but they told me it wasn't legal to drive on the road.  I ended up buying a Honda Click 125cc motorbike, which gets about 110 miles per gallon, so I'm minimizing my use of gasoline the best I can.

I've been watching the Toyotron web site since then to see what electric motorbikes are available, and if and when they will become legal for street use.  Sadly the site hasn't changed so I don't know if they are coming out with new designs or are even still in operation.

I was dropping a friend off at the airport in Bangkok so we stopped by the address on the Toyotron web site for a personal look.

We were greeted by two Thai ladies who spoke no English, but we managed to get some photocopied brochures and a couple of test rides.  The factory is somewhere else in Bangkok and as you'll see from the videos below the showroom is pretty bare and the rear area of the property is piled with old parts and broken bikes.

The main model listed on the web site is the Dragon-G, with a small and large battery pack available.  The Dragon-G body style is much like my Honda Click 125cc bike and several others in use here.  The spec on the Dragon-G Turbo (which shows a distinct lack of marketing prowess as you don't need a turbocharger on an electric motor...) is 40-60 kilometers range and a top speed of 55 km/hour. This is a little small for my use around town and up and back to the next towns. The Dragon-G Super has 60-80 kilometers range and top speed of 65 km/hour. I wish there was still more range and I have a dream of buying one without a battery pack, then building my own pack with CALB LiFePO4 cells and an appropriate charger.  I wonder if they would agree to it?

Strangely, they had two bikes on display called Hunter but no paperwork available and not shown on the web site.  I did a Google search and found this article from 2008 showing how close it looks to a Honda Big Ruckus.  The Thais generally have no respect for copyright law, so I assume they just welded it up based on the Big Ruckus shape.  I have no idea if they're still building it or these are just leftovers.  It has a very upright driving position, with a forward-backward adjustable seat.  The backrest tilts down to make a second seat, and as you can see it has additional storage space available in the saddlebags. 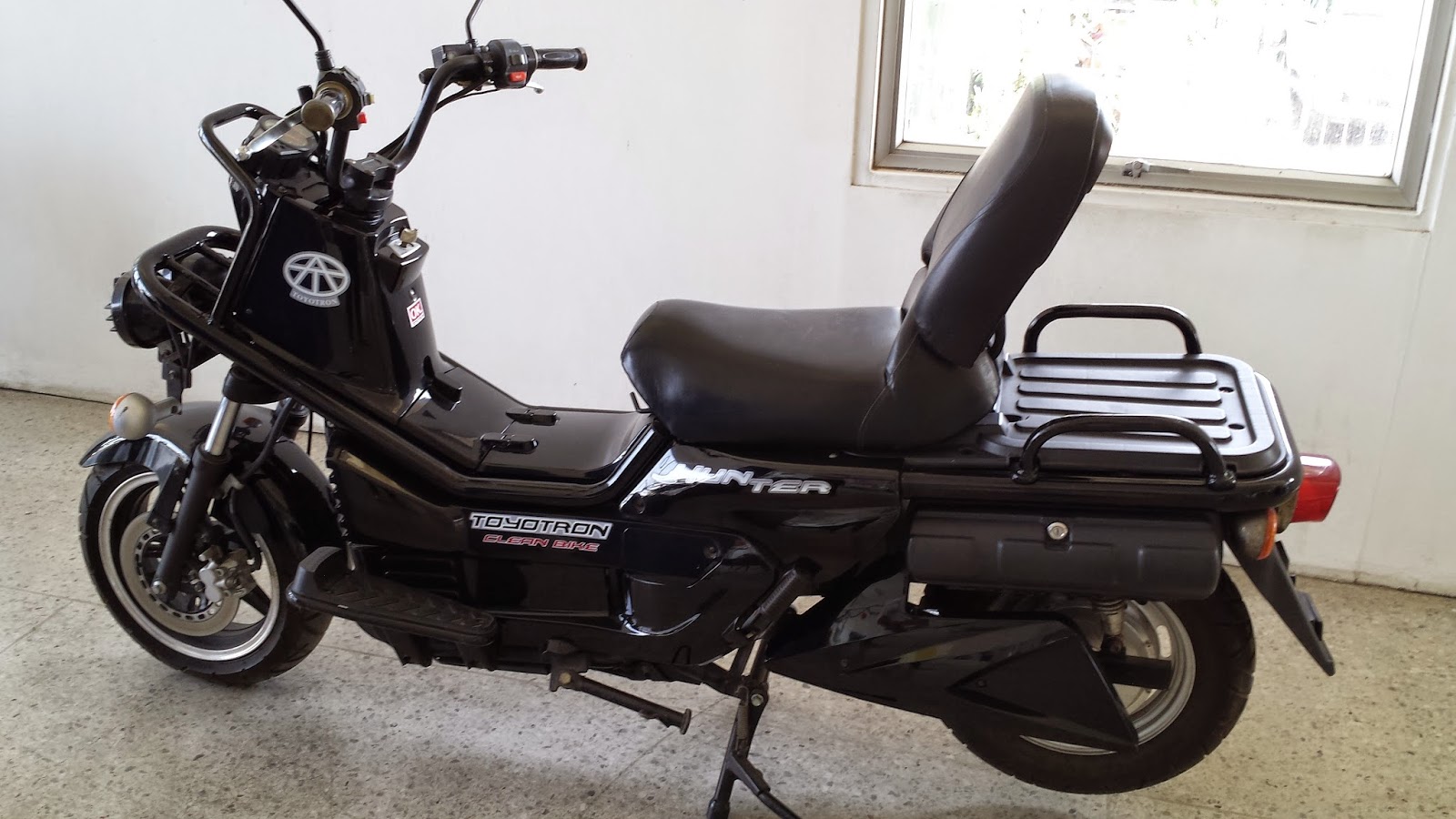 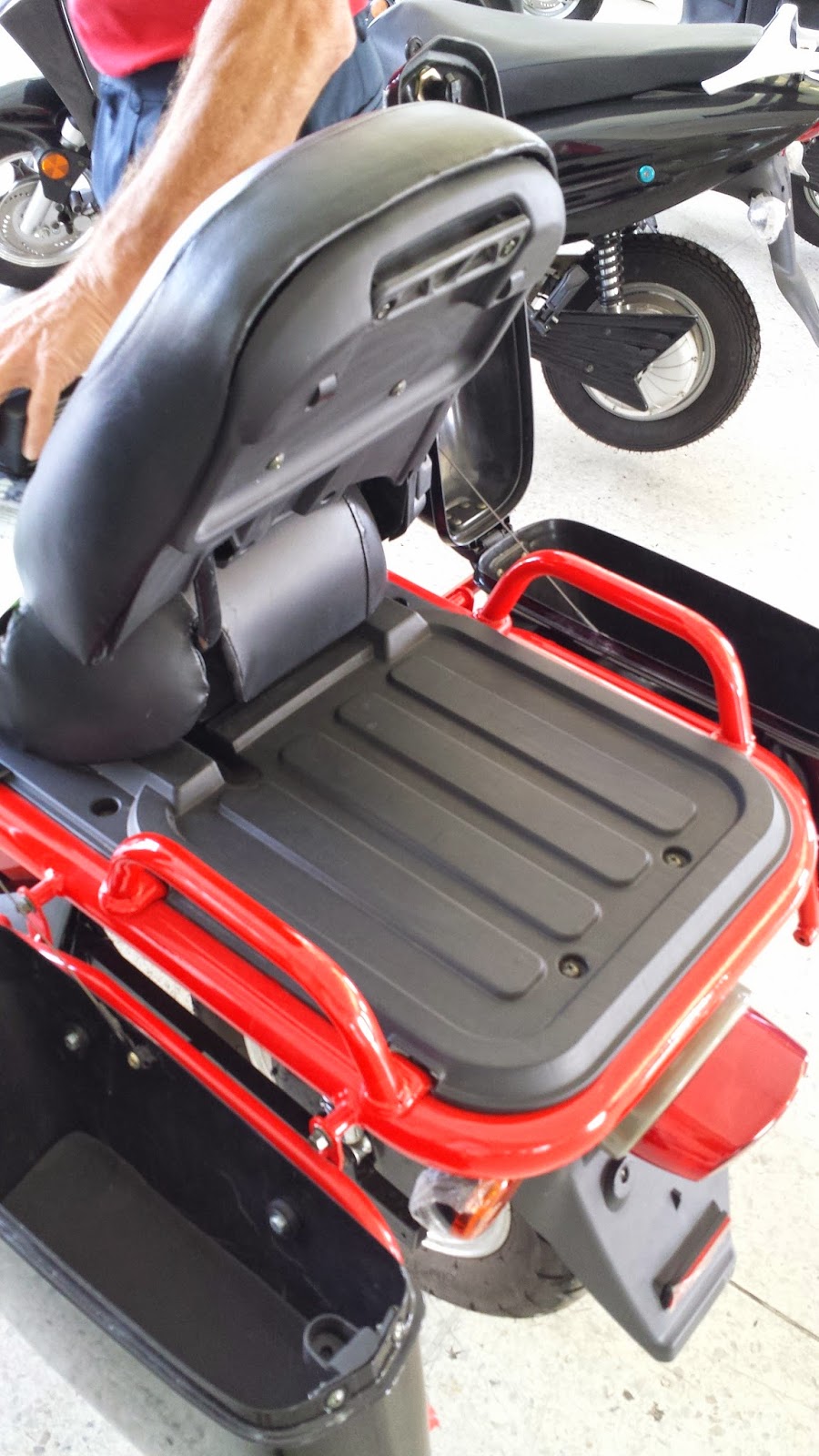 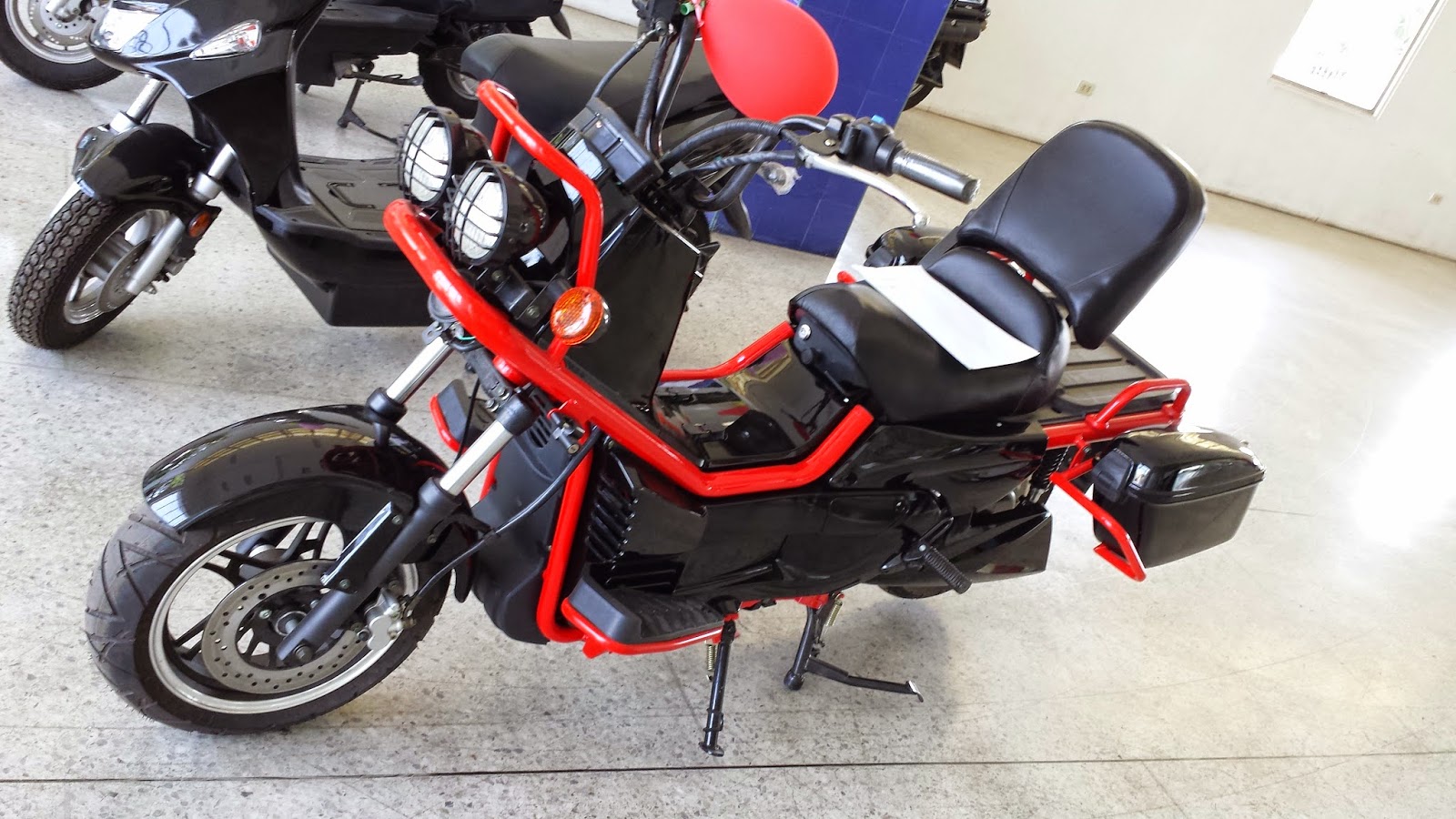 They also have two models which are essentially electric bicycles which I'm not interested in.

The ladies made it clear that the motorbikes can be licensed and driven on the roads, so I'm getting conflicting information.

To wrap up, here are three videos we took of test drives around the back area.  None were brand new, and the Hunter had a nasty grinding noise when it first started rolling, but it has nice pickup.  The Dragon and T-Win felt light with good balance and handling, while the Dragon-G was in very bad shape after nearly 5000 kilometers and nearly no charge remaining in the pack.  The last video also has some footage of the inside of the showroom and the other bikes on display.

While these are competitively-priced with similar sized gasoline bikes, I would be asking for more range than they can deliver so I think my best plan may be to buy a used motorbike with a chassis I like and converting it to full electric with my own design.  I just need to figure out how to make it legal first!

Posted by Michael Brown at 3:40 AM No comments: