I discovered Tesla had a showroom in downtown Vancouver so I headed into the city.  I couldn't walk to the Tesla store directly as some streets were blocked off due to a gas leak under the city streets, firetrucks all over the place.

The Tesla store is quite small, with only enough room for one car and no rolling chassis. 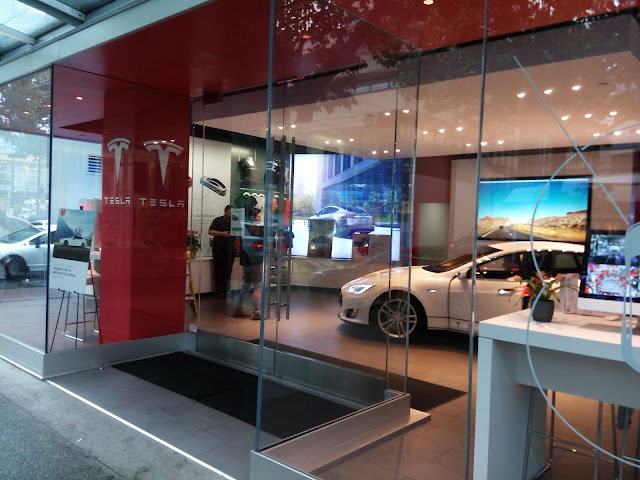 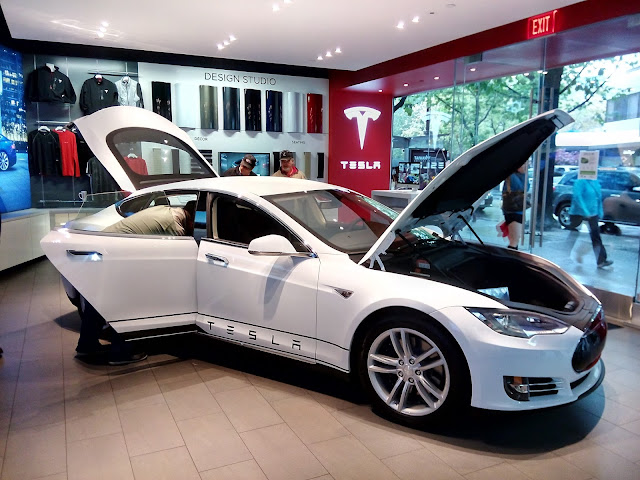 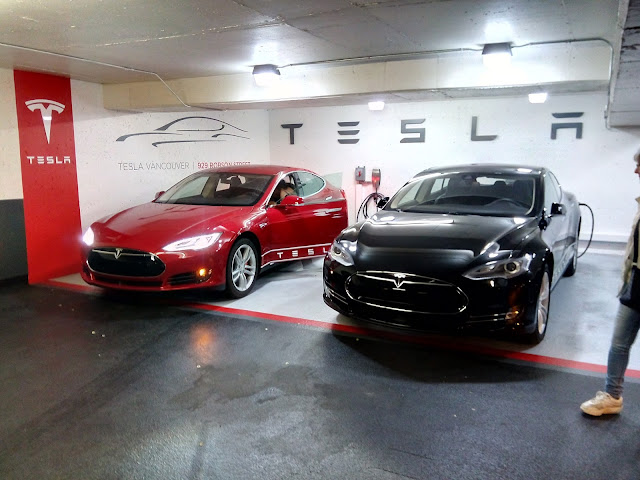 After a long discussion with Tesla staff member Preston, he offered to let me have a test drive.  He asked me if I wanted the P85D and I said of course!  Walked to their parking area, they have 4 cars ready for test drives.  We crept through the grid-locked CBD due to the light rain and gas-leak blocked roads, having to wait a couple of cycles for each light.  Not the best demonstration of the Tesla's performance.  Finally the traffic opened up and we went into a not-much-used tunnel leading to the docks which luckily was also dry so I punched it in Insane mode.  I could only hold the pedal down for a couple of seconds before I had to let up.  My eyes went a bit tunnel-vision and I got a pulse shock of adrenaline through my system.  It's truly an unbelievable feeling, even more than the other Teslas I've driven.  Big thanks to Preston!

Posted by Michael Brown at 12:26 PM No comments:

Nick took me to the storage area where he's working on his Mazda Miata conversion project.  He's doing the final wiring loom hookups, then the battery boxes and should be ready to go.  Very tight area but the MX-5 is small too...

Follow his progress through his video submissions to evtv.me. 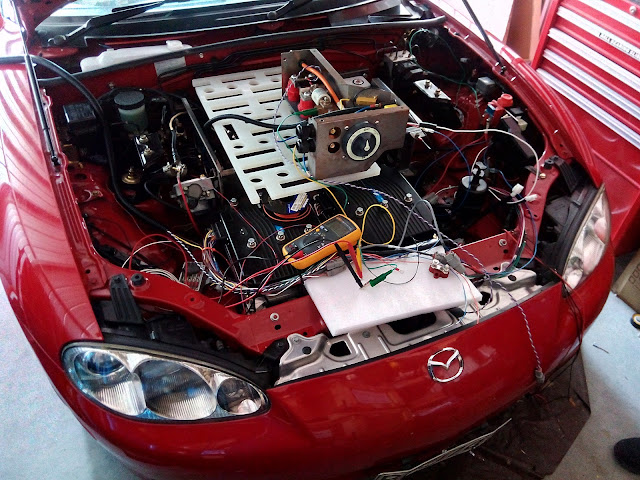 Posted by Michael Brown at 8:59 PM No comments:

Steve's Tesla Model S has been invited to go on display at a local race track as part of the "Mother's Car Polish Show and Shine" vehicle display area.  #LeadingTheCharge participates in as many of these events as possible to spread the word about electric vehicles. 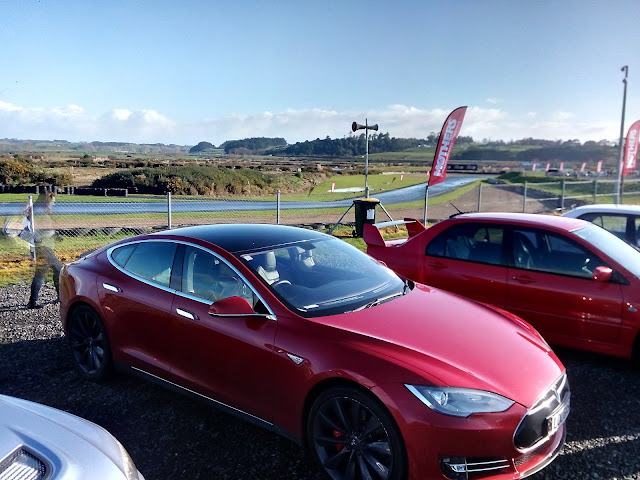 Nick and I make our way to the track and talk our way in without having to pay the $20 entrance fee. Score!

We attend the driver's meeting to prepare for giving test rides but we don't have the required paperwork for the car, unfortunately no follow through from our contact. All we can do is stand next to the car all day. We walk around and I drink hot chocolate to stay warm, it's blustery and cold, with waves of blue sky and showers rolling through. 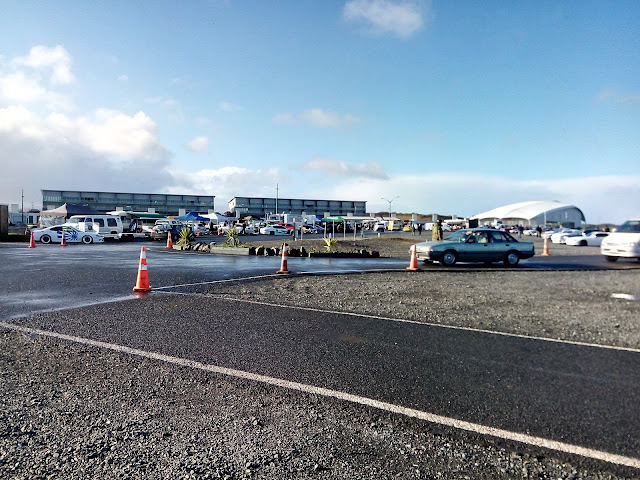 The track is doing DYM - Drive Your Mate. People can take any car on the track but they have to stay under 100kph, and cannot drift or pass in the corners, and most of the cars follow the rules. Lots of hopped up street cars plus many dedicated racing cars, mostly Kiwi and Aussie models. Other times the track is open for drifting, serious cars with lots of power at full drift through the corners, tires billowing smoke.

Also a dedicated skid pad where you could drift your car for about 2 minutes. I saw one guy spin his car and end up in a large puddle at the side of the track, had to be pulled out by a Hummer. Another track-prepped car was trailered back, it apparently hit a wall head on, the front was pushed in and flat and both airbags fired, the driver did not look happy!

We spoke with about 20 people through the day, showed them the car, let them sit in it and play with the 17" touchscreen. Everyone who stopped was very positive about Tesla and electric cars in general and we described the Leading The Charge trust and Steve's upcoming charging network. Around 3PM we decide to give up and go home because of the freezing weather, lack of test rides and lack of interest by the mostly petrol-head attendees, no offense...
Posted by Michael Brown at 8:46 PM No comments:

My timing was excellent as day after my arrival in the city, the Auckland Sustainable Building Network held a Smart Transportation Forum conference in the city center, this is right in my electric car / renewable energy sweet spot.

Steve gave me a ride into the city in the Roadster. Neck-snapping acceleration and it handled well even in the rain. We found the conference building and parked in a special EV demo spot out front, along with a BMW i3, a solar/electric enclosed tricycle thing and Dee brought the Model S a bit later. 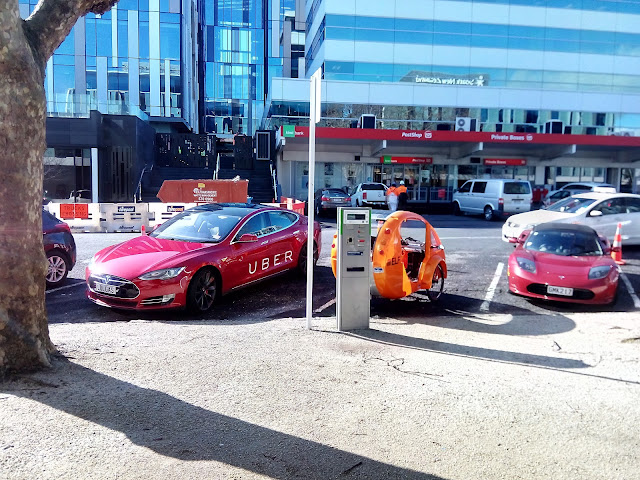 The day consisted of a series of speakers with expertise in city planning and the impact of pedestrians, bicycles, buses, cars, dedicated lanes and the like. One fact I heard was $1 in car driving costs society $9.20 due to fuel subsidies, accidents, injuries, pollution, illness, etc. Gabe Klein had an impressive talk and has a book coming out soon, check him out at gabeklein.com 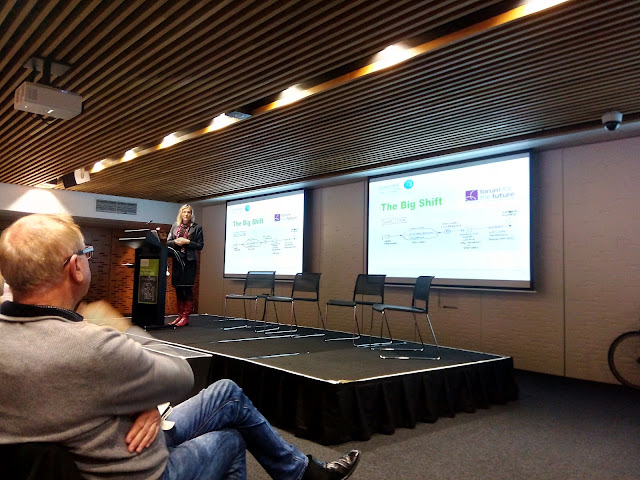 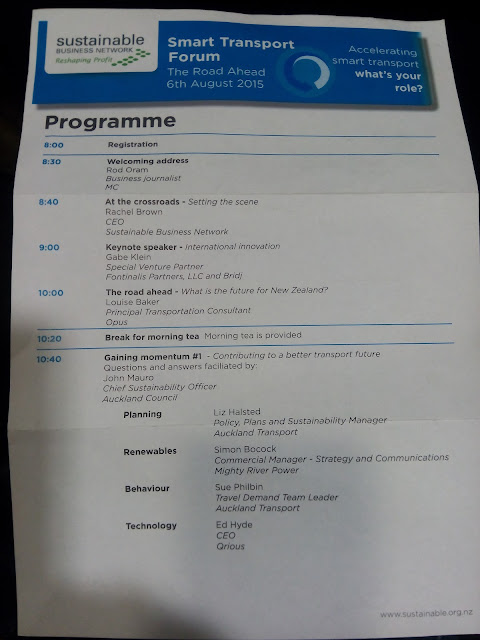 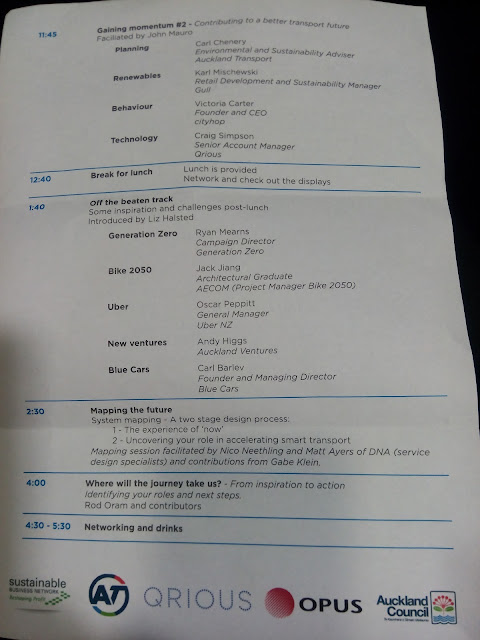 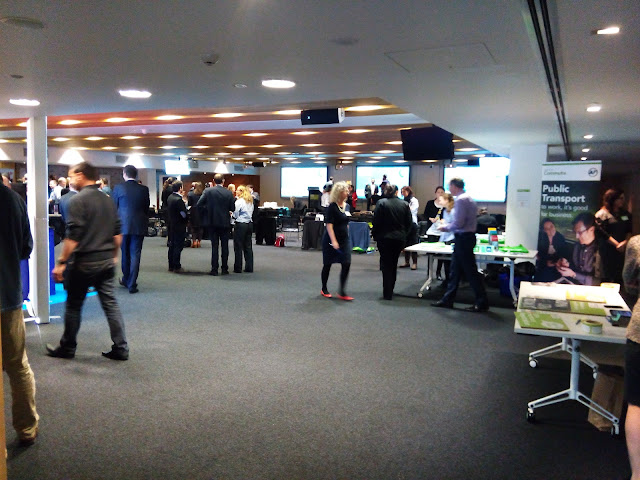 New Zealand is already in an excellent position, as it now generates 80% of its power from renewable resources, including hydro and geothermal. The grid is ready for another 10TW of solar to come on line to support full electric transportation across the country. The Mighty River Power / Mercury Energy company generates 100% renewable power now and supplies over 1 million homes with clean power. 85% of residences are capable of having a home car charger. Power companies give 30% off for overnight charging.

At the end of the day, we did a tabletop workshop to brainstorm on How To Get To Work / Hospital / Next Delivery / School / Holiday. We used sticky notes to write down things, the relationships between those things and tried to come up with potential solutions to any problems identified. Then I drank a lot of wine and ate a lot of cheese.
Posted by Michael Brown at 8:36 PM No comments:

By prior arrangement, I was picked up at the Auckland airport by my EVTV electric car buddy Nick Smith. We drove to my other EVTV electric car buddy Steve West's office and workshop. Steve and his Canadian (yay!) wife Dee have the only Tesla Roadster in NZ and also a Tesla Model S and a Nissan Leaf. They just placed an order for another Model S.

You could say they're a bit nuts about electric vehicles and you'd be right, but it doesn't stop there. They run a trust called #LeadingTheCharge which works for the uptake of electric vehicles, charging and energy independence in New Zealand. With the rest of their spare time, they've started a business called Charge.net.nz which will roll out nearly 100 DC Fast Charge electric vehicle stations all the way up and down New Zealand.

I got to see the first charger up close and unplugged my first CHAdeMO plug from a friend's Nissan Leaf who popped in for a quick charge and test the functionality. 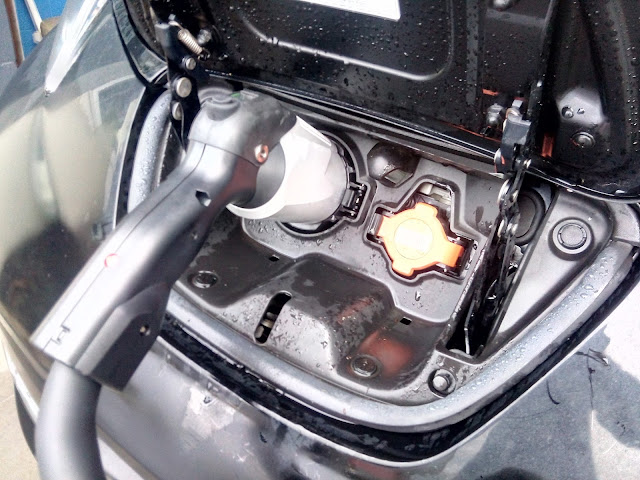 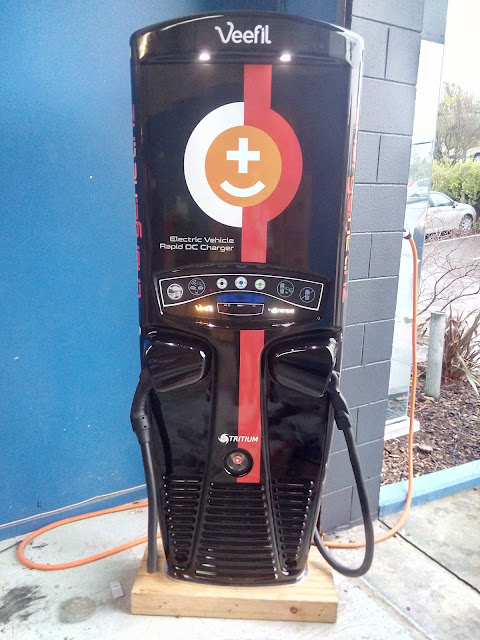 Posted by Michael Brown at 8:28 PM No comments: